'People Are Just Trying to Land the Airplane.' White House Staff Packs Up as Trump Rages On

US President Donald Trump arrives to speak to supporters from The Ellipse near the White House in Washington, DC., on Jan. 6, 2021.
Brendan Smialowski—AFP/Getty Images
By Brian Bennett

As President Donald Trump pushes the limits of his power in a last ditch attempt to overturn the election results, the reality that Trump is leaving the White House on Jan. 20 has already sunk in for many White House officials. Many still working directly under Trump every day are trying to keep their heads down during the President’s antidemocratic antics, finish their jobs, pack up their desks and go home. “People are just trying to land the airplane,” says one White House official, speaking on condition of anonymity. “A lot of people don’t want to be here. It’s just that you can’t abandon ship when the ship isn’t Trump — it’s the country.”

White House officials are scrambling to finish up long-standing policy changes and implement parts of the latest pandemic relief package and new medical regulations, and follow through with parts of the new defense authorization bill that need to be put in place before Trump’s term ends. Officials from the transition team of President-Elect Joe Biden have been working in the Eisenhower Executive Office Building next to the West Wing to prepare to take over in two weeks. But staff are finding it increasingly difficult to get Trump’s attention as he remains fixated on reversing his election loss and pressuring Vice President Mike Pence to overreach his power during Senate electoral college vote count Wednesday. “He is still consumed with all this kind of stuff, the election, and all that kind of thing,” the official says.

Trump is still signing off on urgent decisions, such as an order over the weekend to turn around the homebound aircraft carrier USS Nimitz and keep it in the Middle East in response to what the Pentagon said were Iranian threats against Trump. On Tuesday, Trump approved a ban on the use of several online payment applications run by Chinese companies over concerns the Chinese government was using the apps to collect valuable economic and national security data on American citizens. But Trump’s public comments and tweets have been focused on overturning the election results, not his final policy goals. “Whenever he speaks publicly it’s about the election,” the official says. “It’s a terrible moment right now.”

The President’s singular focus during his final weeks in office partly comes down to the fact there’s few left to tell him to stop. As Trump finishes out his term, he’s winnowed his circle of advisors down to people who won’t say no to him, says a former White House official. “I don’t know there’s many people being profiles in courage and standing up to him. That’s for damn sure. People are just out of there, they don’t want to have the fight any more,” the former official says.

Chief of Staff Mark Meadows and Trump’s senior trade advisor Peter Navarro have, in recent weeks, allowed Trump to stew in misinformation and lies that voter fraud cost Trump the election, the former official says. “A lot of it is really shitty advice and the President is once again relying on people who tell him what he wants to hear. You can blame him, and it’s all fair, but he’s not really left with anyone telling him the truth,” the former official says. “It’s like pieces of brick are falling off the edifice and you’ve just got to wear your hard hat in there. But how much damage can he do in two-and-a-half more weeks, that’s the question.”

Crowds arrive for the "Stop the Steal" rally in Washington, DC., on Jan. 6, 2021.
Spencer Platt—Getty Images

In the past, chiefs of staff have often seen it as part of their job to steer Presidents away from bad decisions, but the Saturday call with Georgia’s Republican Secretary of State Brad Raffensperger was a clear illustration of Meadows failing to protect the President from himself, the former official said. The call with Raffensperger, which Meadows helped arrange, was “stupid and in bad taste” and put the “President in a terrible position,” the former official says.

Unlike those left in his senior staff, Georgia state GOP officials didn’t bend to Trump’s demands. On the call, a transcript of which was published by the Washington Post, Raffensperger refused budge on Trump’s entreaties and threats that Raffensperger was putting himself in legal jeopardy by not changing the results. “Imagine the pressure they’ve been under,” says Timothy Naftali, a historian at New York University and a former director of the Richard Nixon Presidential Library and Museum. “It’s really hard to say no to a President,” he says.

Naftali notes there have been a few prominent examples of White House staff refusing to follow through with Presidential directives in the past. In 1972, Treasury Secretary George Shultz said no to Richard Nixon’s effort to use IRS investigations to punish political enemies. When Nixon wanted to shut off federal grants to universities where faculty were against the Vietnam War, staff at the Office of Management and Budget pushed back. In 1983, Reagan ordered an airstrike against a Hezbollah training camp in Lebanon after the bombing of the Marine barracks in Beirut, but Reagan’s Defense Secretary Caspar Weinberger didn’t do it.

It’s unclear how much lasting damage Trump’s unchecked impulses are doing to the GOP, but many inside and outside the party agree it’s a problem. Trump’s claims of voter fraud may have already had an impact in suppressing Republican turnout in Georgia, says Lauren Wright, a political scientist at Princeton University. “It’s very damaging to the party in the short term… It very well may have shaved off just enough votes or muddied the waters or given people enough doubt not to participate in Georgia,” Wright says.

The impact of Trump and his allies embracing disinformation could be even more far reaching if Trump’s loss doesn’t lead to a course correction. “Republicans who entertain conspiracy theories are really hurting the party because they can’t even engage in policy debates,” Wright says. “It’s hard to have a political debate about the environment when Trump, as head of the party, says climate change is a hoax, and it’s hard to discuss what’s right or wrong with the coronavirus response when members of the party have been questioning whether it’s real.”

At the very least, Trump’s singular focus on the election results comes at a time when he could be burnishing his record on stacking the federal judiciary with conservative judges, rolling back regulations and ushering in tax cuts. “At a time when he should be thinking about building a legacy, or at least firming up a legacy, he’s throwing the rest of it away to stay in office,” Naftali says. “He views himself as having gotten away with everything except the darn fact that Biden got more votes than he did, and this is what’s sticking in his craw.”

Those watching closely know that even when Trump leaves the White House on Jan. 20, he won’t be going anywhere in Republican politics. Despite the fact that GOP has now lost control of the Presidency, the House and possibly the Senate on his watch, Trump’s been fundraising off his fight to reverse the election outcome, building up war chest of some $200 million in a political action committee called Save America. That money can later be doled out to fund political campaigns for candidates Trump wants to elevate. “He’s going to be hanging over the Republican party in a big way,” the former official says. 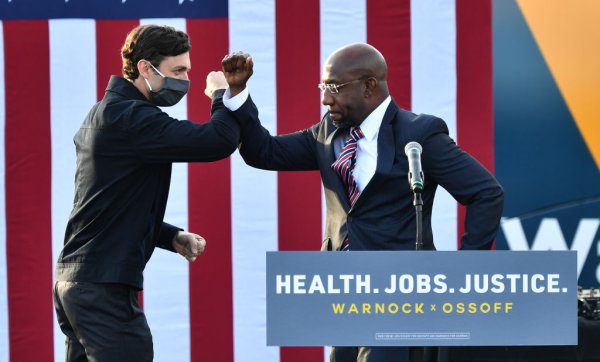 Ossoff and Warnock Win in Georgia
Next Up: Editor's Pick