UNITED STATES - AUGUST 29: Aerial view of the Pentagon building.
Photo By Bill Clark/CQ-Roll Call, Inc
Ideas
By James Stavridis
Admiral Stavridis (Ret.), a TIME Contributing Editor, was the 16th Supreme Allied Commander at NATO and is an Operating Executive at The Carlyle Group. His new book is 2034: A Novel of the Next World War. His previous nonfiction book was Sailing True North: Ten Admirals and the Voyage of Character

The ten living American secretaries of defense collectively signed an extraordinary letter over the weekend, stating in the strongest possible terms that the U.S. election is over, the time for protests is past, and that there is no role for the U.S. military in resolving any controversy surrounding it. They called for a smooth and professional transition of defense responsibilities from the current administration to the next, reflecting their frustration with the obvious stonewalling that has characterized much of the turnover so far. And, most forcefully, they said that any civilian and military officials who directed the use of the military to interfere in the electoral process would be held accountable, “including potentially facing criminal penalties, for the grave consequences of their actions on our republic.”

I know personally all ten of the former secretaries, and worked directly as a senior military officer in uniform as a combatant commander for Secretaries Gates, Hagel, Panetta, and Carter. I know Jim Mattis well as a respected contemporary and a close friend for decades with whom I am in frequent contact. I’ve spoken at gatherings organized at their request for Secretaries Cohen and Perry, and provided advice to Secretary Esper. In particular, I spent over two years day-by-day in the inner office of the secretary of defense alongside Secretary Rumsfeld as his senior military assistant from 2002-2004. These are strikingly different men in terms of their personalities, demeanors, backgrounds, and outlooks. There cannot be two more different people than Don Rumsfeld – a staunch Republican, intercollegiate wrestler, and tough-minded realist – and Ash Carter, a brilliant theoretical physicist, strategist, and determined Democrat. Secretary Hagel is a former enlisted Army sergeant, while Jim Mattis retired as a four-star General. They differ often in thought, word, and deed. But all of them share a very important trait that caused them to come together and sign this letter: integrity. In that sense, they are all diametrically opposed at their very core to the current president of the United States – and thankfully so.

The secretaries have been watching events closely for the past months, including the infamous presidential walk across Lafayette Square and well-sourced reports of discussions in the Oval Office of martial law. Even after they released the letter, the most recent reports of Trump pressuring the Georgia Secretary of State to “find” another 12,000 votes could only have reinforced their views and sent a collective shiver up their spines. And it should: nothing in our lifetimes is a more direct contravention of the oath each of these cabinet secretaries swore to “support and defend the constitution of the United States.” I suspect that these ten leaders, urged by former Vice President Dick Cheney (the highest ultimate office holder of the group), came reluctantly to the conclusion that they owed the nation their public voices. I emailed half-a-dozen of the signers simple to say well done, and the prevailing response was simply “it had to be said.” I could feel their collective sadness about the state of the republic, coupled with a healthy dose of real outrage, in the tone of their letter.

But here’s the bad news: none of them is in a position to do anything but raise their voices, as important as that is for the nation. The current occupant of the E-Ring office is a retired Army Colonel named Chris Miller, who lacks the experience, credentials, or independent temperament to stand up to a willful president. That is why the most important single statement of the past weeks has been the tweet from Secretary of the Army McCarthy and Army Chief of Staff McConville, saying that there is “no role for the U.S. military in determining the outcome of an American an election.” That statement was essentially a direct response to disgraced Lieutenant General Mike Flynn’s public call for martial law and a redo of the 2020 election. Fortunately, having the current Army Secretary and the Army’s top General directly and publicly denigrate such dangerous thinking aligns with other voices, including the Chairman of the Joint Chiefs, General Mark Milley.

I worry deeply about how all of this is perceived overseas. It is obviously a time of high-fives in Beijing and Moscow, and the Iranians and North Koreans are happy to see such distractions in Washington. Even worse, however, is the reaction in the capitals of our allies, who are already discouraged and distanced by the four years of the Trump administration’s erratic policy and dismissive attitudes. Here is where the maximum value of the secretarial letter lands – overseas with our allies. Each of these secretaries traveled extensively during their time in office, and all remain deeply connected to the international world. To see these ten leaders respond so forcefully to the fever dreams of undoing the election coming out of the White House is a powerful international tonic to the skepticism of the past four years. We must hope it is.

We should be thankful that these former secretaries have raised their voices, and encourage all – especially the active duty military – to pay attention. But the real question for us is simple: how has it come to be necessary? Have we strayed so far from our essential belief in the values of democracy that our vast department of defense exists to protect? Perhaps. But we can still sail through these difficult waters, recognizing we are clearly poised on the edge of a thundering waterfall, with the voices of these ten men calling us back. God help us if we don’t heed their wisdom. 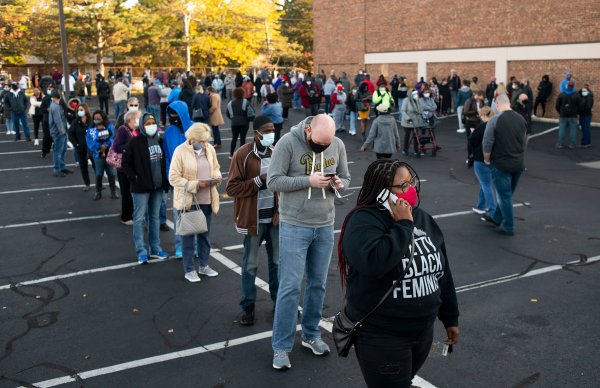 How the Next Congress Can Fix U.S Elections
Next Up: Editor's Pick