Police are pictured outside the Yantian District Peoples Court, where 12 Hong Kong pro-democracy activists who were arrested last August as they tried to flee Hong Kong to Taiwan by boat will face trial, in China's southeastern city of Shenzhen, across the border from Hong Kong, on Dec. 28, 2020.
Noel Celis—AFP/Getty Images
By Natalie Lung and Kari Lindberg / Bloomberg

China sentenced Hong Kong activists detained on the mainland to up to three years in prison over a dramatic attempt to flee by boat, a verdict that defied international calls for their release.

Activist Tang Kai-yin was sentenced to three years while Quinn Moon was jailed for two years over their roles in organizing an illegal border crossing, the Yantian District People’s Court in Shenzhen said in a statement Wednesday. Eight other activists who participated in the attempt were handed lighter terms of seven months, the court said.

Yantian prosecutors said they won’t charge two other minors in the group after they admitted to illegal border-crossing. The two had been deported Wednesday, according to a statement by the Shenzhen police. Hong Kong police were scheduled to hold a briefing at 12 p.m. local time on the return of two suspects from China.

The group of 12 Hong Kong activists were captured in August by coast guard authorities from neighboring Guangdong province as they attempted to flee to the democratic-run island of Taiwan. Their ages range from 16 to 33 and include 11 men and one woman. One person is a Portuguese national.

The charge of organizing an illegal border crossing carried a sentence of up to seven years in prison under Chinese criminal law, although some cases can result in life terms. The charge of participating in one is punishable by a jail term of less than a year.

The detentions have become a rallying cry for pro-democracy activists in the former British colony, where historic protests against Beijing’s rule have dwindled amid Covid-19 restrictions and sweeping national security legislation imposed by China in June. Supporters have used the slogans “Save 12” and “Save 12 HK youths.”

China has sought to curb dissent in Hong Kong, arresting prominent pro-democratic figures and introducing a loyalty requirement for lawmakers. The moves have fueled concerns about Hong Kong’s freedom of speech and the independence of its judiciary.

The families of the 12 published an open letter to international governments on Saturday, appealing to them to urge China’s government for transparency on the trial’s proceedings and to ensure the human rights of the activists.

The verdict could stand to further strain tensions over Hong Kong between the U.S. and China, as President-elect Joe Biden prepares to take office after years of deteriorating ties under Donald Trump. The Trump administration has been vocal of Beijing’s actions in the Asian financial hub, including imposing sanctions on top officials like Chief Executive Carrie Lam.

A statement Monday from a spokesperson for the U.S. embassy in Beijing called on China to immediately release the 12 and allow them to depart the country.

“Their so-called ‘crime’ was to flee tyranny,” the statement said. “Communist China will stop at nothing to prevent its people from seeking freedom elsewhere. We call on Beijing and the Hong Kong government to abide by their international obligations and commitments and to respect the human rights and fundamental freedoms of the people of Hong Kong.”

Westerners Grow Wary of China Travel Over Threat of Detention

Before fleeing Hong Kong, 10 members of the group had been charged separately by local authorities and released on bail for their involvement in the demonstrations, including charges of manufacturing or possessing explosives and assaulting policemen. One was also arrested under the new security law.

Hong Kong Security Secretary John Lee said in September that all — save one wanted by police — had been barred from leaving Hong Kong before departing for Taiwan.

–With assistance from Dominic Lau. 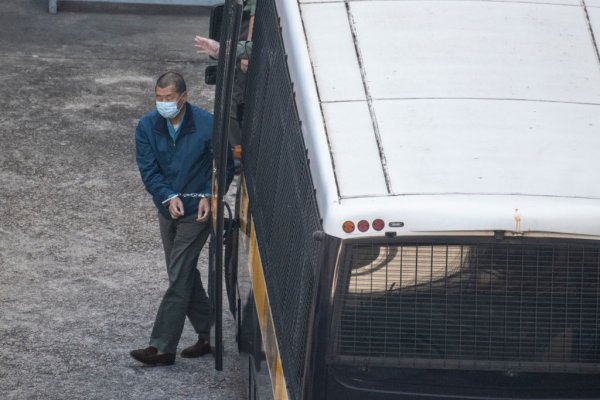