Cory Booker and Tiffany Muller: How the Next Congress Can Improve U.S. Elections and Protect Voting Rights

Early voters line up outside of the Franklin County Board of Elections Office on in Columbus, Ohio on Oct. 6, 2020.
Ty Wright—Getty Images
Ideas
By Cory Booker and Tiffany Muller
Cory Booker is a United States Senator representing New Jersey
Tiffany Muller is the president of End Citizens United

This year, voters across the country faced a myriad of barriers to casting their vote — a global pandemic, a concerted disinformation campaign waged by the President and his allies and amplified by foreign adversaries, shifting deadlines, hours-long wait times to vote, confusing new rules, voter purges, intimidation, discrimination and more.

Despite these obstacles, Americans still turned out in record numbers to decisively elect Joe Biden and Kamala Harris as President and Vice President of the United States.

Voting in the United States of America is a sacrosanct right. It is both a precious obligation and a sacred opportunity we all have to participate in our democracy, and our voting process should be treated with the gravity and seriousness that it demands. But it simply shouldn’t be so hard to vote in a democracy such as ours.

There are tangible policies the next Congress can pursue to try to address the deep-seated problems that prevent too many people from being able to exercise their right to vote.

First, we need to set a federal standard for optional mail-in voting. This year’s unprecedented reliance on absentee voting due to COVID-19 revealed an uneven, messy, byzantine patchwork of mail-in voting rules across states that only served to confuse voters.

Next, we need to expand early voting and make it universal across states. This year, more than 100 million people voted early. It’s a key way to reduce lines at polling places on Election Day, which research has shown are longer in communities of color than predominantly white communities. While nearly every state offers some form of early voting, some are significantly more restrictive than others.

We also need to invest in the infrastructure that helps our voting systems to function. We can and should do that by creating a new federal service corps, modeled off the Peace Corps and AmeriCorps, that will train and place individuals in all 50 states who would help register voters, develop and implement voter-education campaigns, and serve as poll workers.

And last, but most important, we need to restore the full power of the Voting Rights Act. The Voting Rights Act of 1965 was a landmark piece of legislation that prohibited voting discrimination, widely regarded as the most effective civil rights legislation in American history. But in 2013, the Supreme Court gutted the law. Free to erect discriminatory barriers masquerading as election-security measures, many states – most of them concentrated in the South – quickly implemented voter disenfranchisement laws, such as voter ID laws, voter purges and poll closures, all with the sole purpose of making it harder to vote, and all disproportionately affecting communities of color.

These policies would dramatically reform and improve our elections. They would set standardized rules for mail-in voting, create uniform deadlines and prohibit unnecessary and onerous barriers to returning ballots. The bills would also require every state to offer at least 15 consecutive days of early voting for federal elections and require states to implement same-day and automatic voter registration. And, perhaps most important, they would restore the protections enshrined in the Voting Rights Act by requiring states with a history of voter discrimination to have voting changes approved by the Department of Justice to ensure they are not discriminatory in nature.

When the new Congress is sworn in this January, it should make this once-in-a-generation suite of election and voting reforms a first priority to restore faith in our democracy.

When the late Congressman John Lewis spoke at the March on Washington in 1963, he articulated the vision of “One man, one vote.” Later, when he organized young activists to descend upon Mississippi for the Freedom Summer of 1964, it was to register Black voters. And the following year, when he was beaten by Alabama State Troopers on that fateful bridge in Selma, it was for the cause of voting rights. Indeed, one of us owes our seat in the U.S. Senate to his fearless advocacy for voting rights.

Within three months of that infamous march, which was broadcast to horrified viewers around the world, Congress passed and President Lyndon Johnson signed the Voting Rights Act. “Rarely in history has public opinion reacted so spontaneously and with such fury,” TIME observed.

Today’s voter suppression tactics may not include billy clubs or literacy tests, but in their place have been put things like voter ID laws and voter purges, all maliciously targeted toward voters of color and all revealed in stark focus in this year’s election.

Making voting easier, more accessible, safer and more secure is necessary and long overdue. Nothing is so foundational to every other facet of our democracy than the right to cast a ballot free from discrimination and intimidation.

May we now do our part. 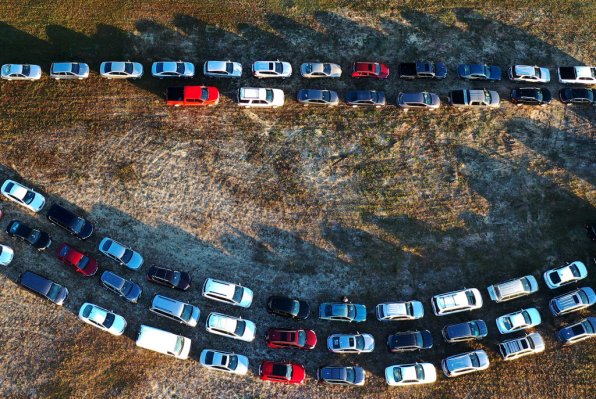 Millions of Americans Face Food Insecurity. They Need Help.
Next Up: Editor's Pick