By Billy Perrigo and VIDEO BY Abhishyant Kidangoor

Days after Hari Krishan Lal Anand’s 90th birthday, he returned to the village where he was born. He had been separated from from his hometown for more than seven decades by political strife, wars and, finally, a pandemic. His family had arranged a trip as a birthday surprise. Tears filled his eyes as he saw the home where he grew up.

Ten minutes later, he slipped off the virtual reality headset and was back in his living room.

“I was taken back to my village, and although there were a lot of changes, I felt at home,” Anand tells TIME. “I can’t explain how grateful I am.”

Anand lives in India, but he grew up in a village in what is today Pakistan. He was forced to flee in 1947 during the Partition of the British Raj. The departing colonialists, battered by the Second World War and facing a powerful independence movement in India, hastily drew a line on the map where there had not been one before. One side would become Hindu-majority India, the other Muslim-majority Pakistan.

It caused the largest mass migration in human history. Amid deepening religious tensions and violence, millions of Hindus and Sikhs living on the Pakistani side fled for India, and millions of Muslims traveled in the opposite direction. Bands of armed men on both sides of the new border raped and massacred the fleeing minorities. An estimated 14 million people were displaced, and between 1 and 2 million were killed.

Originally, Anand’s family had planned to physically make the journey to Pakistan. But even without the pandemic, the plan would have been an ambitious one. The wounds of Partition run deep, and today India and Pakistan are still deeply suspicious of one another. They have fought three major wars since 1947, and each side has a nuclear arsenal and military forces arrayed against the other. Getting a visa to travel across the militarized frontier is difficult for citizens of either country even at the best of times.

Read more: How the Memory of India’s Traumatic Partition Is Being Preserved Across Borders

So, when COVID-19 made their plans impossible, Anand’s family reached out to Project Dastaan, an initiative that since 2018 has connected Partition refugees from both India and Pakistan to their home villages. The catch: the trip is made through the medium of virtual reality (VR). Travel between the two countries is often a bureaucratic nightmare, says Saadia Gardezi, one of Project Dastaan’s co-founders. “Which is why this virtual project has actually worked, because that was the only way to circumvent those physical constraints.”

Anand’s childhood in the village of Dharukna—in what is now Pakistan’s Punjab province—was a “simple straightforward life,” he says. Punjab at the time was a region with a large mixed population of Hindus, Muslims and Sikhs. Anand’s family—Hindus—were in the minority in the village. “The relationship among Hindus and Muslims was very cordial,” he says. Muslims would attend Hindu weddings, and vice versa. Old men in the village, irrespective of religion, were addressed with the honorific “baba ji.” “There was no conflict,” he says.

But around them, tensions were rising. A movement calling for Indian independence had been gathering steam across the subcontinent for decades, and by 1946 had forced the British government to agree to hand over India within two years. But decades of colonial divide-and-rule policies, including treating Hindus and Muslims as separate electorates, had led to rising religious tensions. Muslims increasingly felt the Indian nationalist movement, which preached secular ideals but was overwhelmingly Hindu, would not govern in their interests after independence. Muslim and Hindu hardliners who each wanted a state for themselves stoked the violence for political ends, despite attempts by leaders like Mohandas Gandhi to calm the tensions.

When the British left in 1947, the tensions reached boiling point in Anand’s native Punjab. The British, who took it upon themselves to determine the independent countries’ new borders, had decided Punjab would be one of the regions to be bifurcated. The line, based on outdated census data, roughly split the province according to which religion was in the minority in each district, despite the large minorities on both sides. (Sikh calls for a dedicated homeland went unanswered.)

At the time, 16-year-old Anand was an apprentice to a local official who worked in Dharukna, but lived in a different village. One day, as sectarian violence in Punjab rose, the official asked Anand to accompany him on his journey home because he feared for his life. Anand’s father agreed he could leave, and the pair set off.

Anand would never return to his village. When they reached their destination safely, Anand met up with a cousin’s family nearby, who told him it was not safe for him to go home. Without knowing what had become of his parents, Anand then travelled with his cousin’s family to a refugee camp nearby, then on to India by train. “Fear was there, definitely,” Anand recalls. “But fortunately, we ended up in India.”

“I was taken back to my village, and although there were a lot of changes, I felt at home,” Anand says of his virtual visit to his hometown in December 2020.
Project Dastaan

Anand was lucky in that he witnessed no violence on his journey. But like many refugees, his experience of leaving home was traumatic, and in conversation his answers are short and circumspect, even 73 years later.

For Project Dastaan, ethical questions of how to deal with trauma in interviews with survivors are paramount. “One of the key things about our project is this exploration of trauma, but in a sense, what we’re trying to do is give people closure, rather than re-traumatize them,” Gardezi, the Project Dastaan co-founder, says. “Our interviews focus on finding those memories that we can build on as shared cultural heritage or shared experiences, rather than specific questions about violence or the trauma that they felt.”

Project Dastaan was founded by three former students at the University of Oxford, two of whom—Sparsh Ahuja and Gardezi—have grandparents who migrated in opposite directions during Partition. They describe the project as a peacebuilding initiative aimed at bolstering cross-cultural dialogue between India and Pakistan. Though many Indians and Pakistanis speak the same languages and share a common history, the relations between the two countries mean that mutual understanding can be hard to achieve. “We know in our lifetimes we may not be able to create peace between India and Pakistan with Project Dastaan,” Gardezi says. “But it’s about goodwill, finding the shared connections. And if we can use that as the base, maybe we can have a dialogue between the peoples of India and Pakistan at a very human level.”

Read more: As India’s Constitution Turns 70, Opposing Sides Fight to Claim Its Author as One of Their Own

When they began talking to Partition survivors about not just their journeys but their lives beforehand, Project Dastaan’s founders realized the common narrative of widespread religious animosity was not the full picture. “What we’ve learned is, when you start interviewing someone, they’re very nationalistic,” says Gardezi, referring to the preliminary interviews that Project Dastaan does with survivors before the VR experience. “But when you start talking about their story, and their experiences, they also try to clarify—saying our Hindu friend helped us, or our Sikh friend helped us, and somebody hid us in their house and risked their lives for us. And that we have no animosity towards the people that we left behind in our villages and our communities.”

That was Anand’s experience. When he finally met up with his parents again, in Bombay (now Mumbai), he heard the story of their final hours spent in Dharukna. A Muslim neighbor had heard about a conspiracy to kill them in the night, they told him, and warned them to leave. “Amongst the Hindus and Muslims, the confidence was so much that my parents gave the keys of our house to a Muslim who was very close to them,” Anand says, “with the confidence that we would come back.”

‘There were tears in his eyes’

This image from the virtual reality tour of Dharukna—in what is now Pakistan's Punjab province—shows a home near where Hari Krishan Lal Anand grew up.
Project Dastaan

On Dec. 13, a Project Dastaan volunteer wearing personal protective equipment met Anand in his house in Chandigarh, and presented him with a VR headset.

Days previously, a different volunteer on the Pakistani side of the border had traveled to Dharukna with a 360-degree video camera and—with Anand giving her directions via WhatsApp—filmed Anand’s home, the school where he studied for seven years and the village pond. When the filming was complete, the volunteer in Pakistan sent the footage to others in India, who drove it to Anand’s home.

Slipping the headset over his eyes, Anand was transported seven decades back in time. The first things he saw were two lines of text: “Happy 90th birthday, Uncle. Welcome back home.”

Then, immersion. Surrounded on all sides by moving images, he felt as if he was walking around in his village, seeing familiar sights that for years had only existed in his mind’s eye. Lots had changed, he noticed, but they seemed to be good changes. “It is an improvement,” he says. “I like that my village has improved a lot.”

For Shah Umair Ansari, the Project Dastaan volunteer in the room, the change in Anand’s demeanor before and after the experience was profound. The nonagenarian was not very expressive at first. “But slowly and gradually, he told us a lot of things about the migration,” says Ansari. “It triggered that emotion where he wanted to speak about it, wanted to feel about what’s actually been seen there.”

“He was emotional,” Ansari says. “There were tears in his eyes.”

The approach has implications for historians, says Sam Dalrymple, another of Project Dastaan’s co-founders and the author of a forthcoming history book, Five Partitions: The Making of Modern Asia. Not only does it give survivors a sense of closure, but it gives their offspring—second and third-generation refugees—a chance to add some color to their parents’ stories, and perhaps understand their own origins a little better. Plus, when children begin asking their parents questions, Partition survivors are often more forthcoming, Dalrymple says. “When it comes from the children, they answer these questions in a different way than they would to us.” Project Dastaan then records those answers for history.

Now, with COVID-19 vaccines on the horizon, Project Dastaan is planning expansion. The project has VR experiences for 16 more refugees in the works, including its first four in Bangladesh—which Dalrymple says is a “a fascinating and often neglected part of the Partition story.”

The emotional impact on refugees themselves is already evident. Back in Chandigarh, Anand says that the experience has satisfied his desire to return to his home village for one last time. “That ambition has been there all the time,” he says. “But now having seen it, it is enough for me.” 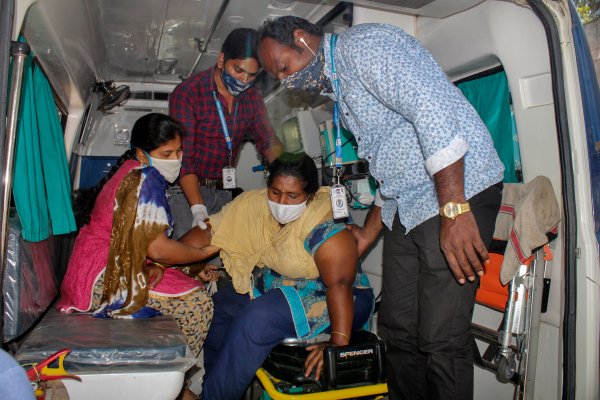 Mysterious Illness Sickens 500 in India
Next Up: Editor's Pick