U.S. President-elect Joe Biden arrives at the Queen Theater for a virtual appearance on the Late Show with Stephen Colbert in Wilmington, Delaware, on Dec. 17, 2020.
Joshua Roberts—Getty Images
By Brian Bennett

When Franklin Delano Roosevelt took the oath of office on a chilly March day in 1933, he told Americans in the grip of the Great Depression there is “nothing to fear but fear itself.” What’s been largely forgotten is the threat that came next. “In the event that Congress shall fail,” Roosevelt said — speaking to a Congress that was controlled by his fellow Democrats — he was prepared to use “broad executive power to wage a war against the emergency, as great as the power that would be given to me if we were in fact invaded by a foreign foe.”

While preparing to take office from the study in his home in Wilmington, incoming President Joe Biden has been reading up on FDR’s first 100 days in office. Biden spent 36 years in the Senate and has long spoken about the importance of relying on Congress to go through the often painful and drawn-out process of debating legislation to drive major policy changes. Now Biden is under pressure from Democrats to sprint ahead on Day One of his administration with a raft of presidential actions that don’t require any new laws to be passed — just Biden’s own signature as the 46th President.

Some argue the expansive use of presidential power is, as FDR once argued, justified as the nation faces a dire health crisis and mounting economic fallout from the pandemic, with months to go before a vaccine is distributed widely enough to allow businesses and jobs to bounce back. Adding pressure is the recent precedent set by the last incoming Commander-in-Chief: President Donald Trump proudly governed with robust and muscular use of executive orders from his first week in office, expanding the power of the presidency, often in haphazard and slapdash ways that faced legal challenges.

Biden faces a choice on whether to course correct or continue to expand on the use of presidential power. He has told advisors he’s reluctant to do a lot without Congress. But for some steps, progressive members of Biden’s party are losing patience to wait for lawmakers to act. Even if Democrats manage to win two Senate seats in Georgia, the vote margin in the Senate would be razor thin during Biden’s first two years in office. Biden is facing pressure from Democrats to take bold executive actions in his first 100 days on heath measures, reducing fossil fuel emissions, and reversing Trump’s restrictions on legal immigration.

Among Biden’s advisors, those actions are being weighed against Biden’s own, ongoing effort to get Congress to act. Biden has been trying to build a bridge to Republicans in the Senate to get big legislation and funding passed early on in his administration. He has already told friends he wants to work with Republicans to get laws that boost funding for pandemic response and relief, seed infrastructure projects designed to repair aging transportation corridors and create jobs, and roll back corporate tax cuts. He also wants Congress to send him a bill that bans police chokeholds and blocks sales of surplus military equipment to police departments.

Biden “feels the sense of time” to get legislation passed on economic relief, climate change and racial justice reforms, says a person who speaks regularly to the President-elect. “It’s a short window,” the person says.

For other actions, Biden isn’t planning to wait at all. Aides are already drafting plans to roll back a raft of Trump actions soon after Biden steps foot in the Oval Office on Jan. 20. During a call with state governors on Dec. 16, Biden said he wants to push forward with executive actions requiring people wear masks on federal lands and in federal buildings. Aides are also drafting plans to increase federal funding for drive-through COVID-19 testing sites, provide funding to make classroom sizes smaller, improve school building ventilation, and other steps that would encourage communities to open schools at the end his first 100 days in office, which would be the end of April.

Biden has also signaled he will halt border wall construction, increase the number of refugees allowed to immigrate to the U.S. each year, and roll out new environmental rules and rejoin the Paris accords, among other actions that would be a combination of executive orders, presidential memoranda and federal rule making.

When Biden moves into the Oval Office, he will sit where Trump frequently signed executive orders, and held them — tagged with his jagged signature in black Sharpie — to pose for press cameras. In Trump’s first days in the White House, he issued a broad order restricting legal immigration and visas from seven Muslim majority countries, aimed at delivering on a campaign trail promise to impose a “total and complete shutdown of Muslims entering the United States.”

Trump went on to sign some 195 executive orders during his four years in office so far, exceeding the counts of recent presidents who have also used the power liberally to sidestep Congress. Barack Obama issued 147 such actions in his first term, George W. Bush penned 173 in his first four years, and Bill Clinton put out 200 in that time, according to a tally kept by The American Presidency Project at UC Santa Barbara. Trump used executive orders to surge domestic energy production and limit environmental protections, as well as strip away job security protections for civil servants and issued an order blocking “critical race theory” from being taught in training for federal workers.

Trump’s aides point out that he issued executive orders also aimed at less incendiary goals, including jump starting the space program, speeding approvals of infrastructure projects, removing roadblocks to producing medical supplies during the pandemic, and reducing drug prices. “President Trump has never shied away from using his lawful executive authority to advance bold policies and fulfill his promises,” White House spokesman Judd Deere says. “As a former businessman, President Trump understands that the American people should not be held hostage by their government when Congressional Democrats fail to do their jobs and obstruct.”

When Roosevelt came into office in 1933, his own party controlled both houses of Congress, and his Inauguration speech was meant to spur them to address the economic crisis with bold and urgent action. It worked. Within 100 days, Congress passed, and Roosevelt signed, the first major legislation of the New Deal, including the Emergency Banking Act and establishing the Civilian Conservation Corps.

For major actions on economic relief, Biden has told aides he wants to work with Senate Republicans first, to see if he can get a bipartisan effort. “If he is engaged in big executive actions, it will be the result of a failure to build a bipartisan bridge,” says Timothy Naftali, a historian at New York University. “But he’ll try to build it first.”

The original version of this story misstated the month during which President Franklin Delano Roosevelt took the oath of office. It was March of 1933, not January. 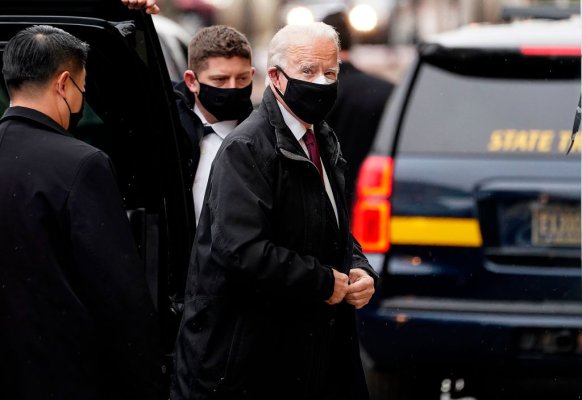 How Biden Can Repair the Justice Department's Reputation
Next Up: Editor's Pick