The Trump Administration says miscommunication was to blame for a rift between the federal government and state governors who complained of receiving fewer COVID-19 vaccine doses than they were initially promised for next week’s round of deliveries.

“There was some confusion between planning and training numbers provided in mid-November and actual official weekly allocations, which are only available the week prior to distribution shipping because they are based on the number of releasable vaccine doses available,” the U.S. Department of Health and Human Services (HHS) said in a statement on Friday. “We are working on clearing up any misunderstanding with the governors and jurisdictions.”

The explanation comes a day after governors and health leaders in more than a dozen states criticized Washington for inexplicably reducing the number of Pfizer/BioNTech vaccine doses planned to be shipped from what was originally projected. The bait-and-switch was particularly disruptive, the officials said, because the country is in the darkest time yet in the COVID-19 pandemic, with intensive care units being pushed beyond the breaking point and the death toll at more than 3,000 a day nation-wide.

Washington Governor Jay Inslee, a Democrat, took to Twitter on Thursday after learning from the Centers for Disease Control and Prevention, which falls under HHS, that his state’s vaccine allocation in the next shipment would be cut by 40%. “This is disruptive and frustrating,” he said. “We need accurate, predictable numbers to plan and ensure on-the-ground success.”

Mike Faulk, Inslee’s spokesman, dismissed the notion that the HHS number was from mid-November saying Friday it was “provided multiple times in multiple forms—by phone, email and in the federal database” as recently as last week.

But HHS insists the problem had more to do with communication issues than with changes in distribution or manufacturing capacity. To keep track of COVID-19 vaccine and distribution, the U.S. government developed a new software platform called Tiberius. It enables states and federal agencies to see their orders and track vaccine shipments. The program covers 50 states, eight territories, the Veterans Health Administration, the Bureau of Prisons, the Indian Health Service and the departments of Defense and State.

After vaccine producers inform the federal vaccine task force, dubbed Operation Warp Speed (OWS), how many doses are available for distribution in the upcoming week. Each state then has the opportunity to place an order up to a certain amount allocated by OWS. Once approved, that order is locked into Tiberius. And yet, state officials coast-to-coast were all led to believe they were slated to receive significantly more doses than what was actually coming their way.

“Idaho, with many other states, has received word that our allotment of the Pfizer vaccine for next week has been reduced from 17,550 to 9,750 doses,” Idaho’s Department of Health and Welfare said on Twitter. “We don’t know why it was reduced. But our focus doesn’t change—healthcare workers will continue to receive the vaccine.”

Florida Governor Ron DeSantis, a Republican, said Wednesday that his state wasn’t “sure about additional Pfizer vaccine for the rest of December,” citing production issues. That sentiment was echoed by HHS Secretary Alex Azar, who told CNBC on Thursday that Pfizer may “need help… on their manufacturing,” which could impact on-time deliveries.

The pharmaceutical giant fired back Thursday saying it doesn’t have any “production issues” and, in fact, it has “millions more doses sitting in our warehouse,” awaiting shipping instructions from the federal government.

But U.S. officials say the storage was the plan all along. The government says it won’t send out first doses without having the second dose in reserve. In this week’s push of the vaccine, for example, 2.9 million doses were delivered to the states while another 3 million were held back for patients to receive their second dose, as required, 21 days later.

The Trump Administration remains confident it will reach its self-imposed goal for about 20 million Americans to receive their first vaccine doses before the end of the month. But that’s only if everything goes as planned and Moderna receives the FDA’s emergency use authorization, which is expected before next week. 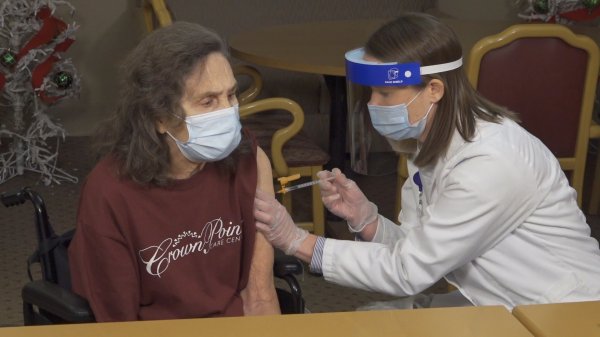 Inside the First COVID-19 Vaccinations Given at Long-Term Care Centers in the U.S.
Next Up: Editor's Pick