I Rejected the Native Grieving Ceremonies My Mother Taught Me When She Died. But Losing Friends During the Pandemic Changed That

I cut a fistful of hair over the bathroom sink in tears. This is how our people have mourned for generations. Nlaka’pamux women, my mother taught me, would cut their hair. They swallowed a spoonful of oil. They prayed and stopped harvesting for a year when a loved one died. There are stories about a woman who tried to pick berries after the death of a child, and the bush dried up, never grew back.

We grieve with ceremony—we have practices and traditions that go back thousands of years, before borders were created, before colonization, before smallpox brought more stories about devastation that made our healthy children skeletal and wiped out whole communities. Grief is honor work, and if you don’t follow instructions, it could hurt your family, hurt the dead trying to pass over into the next life.

I used to watch my mother cut her hair when someone died. I remember her dull, chewing scissors, her squinting black eyes and angular face. She was crow medicine, willful and perceptive. She was steady and certain. Maybe because she had done it so many times. She did outreach work, worked in shelters and group homes and helped people in our community. Her hair was always short.

When she died years ago, I willfully denied all ceremony—picked berries, left my hair untouched and condemned our ways, because I resented how often Indian women are asked to mourn. I didn’t want short hair like my mother. I thought I could will death away by denying my roots. But the pandemic has changed that.

I had five friends in the world when this crisis began, all Indigenous. I lost two. Statistics are always bad for Indians. Our death rates, suicide rates and poverty numbers have been omnipresent in my life since before the pandemic. In the numbers I see the people I know, whose lives are often reduced into stigmatizing pie charts and graphs, if they are represented at all. When researchers began examining COVID-19 and racial demographics, I wondered how we’d fare, but I rarely saw us talked about. What was happening, away from the news, was me losing people who mattered. And the Indigenous people I loved were losing grandparents and language speakers, cousins, aunties and sisters: whole parts of our communities, from death both related and unrelated to the virus.

In April, after I lost someone dear, I felt compelled to cut my hair as best I could, without my mother. That day, all I could manage was the lone clump in the sink and a sense that I wasn’t doing it right. But soon, ceremony would become my savior.

When the pandemic began, my closest friend was told she had a month to live. Candice had three young kids who needed her. She was Northern Tutchone, Wolf Clan, and it had been a painful year of treatment, chemotherapy and surgery, but none of us were ready for her to be gone. She was terrified of death and told me many times. I wanted to console her and say goodbye, but the Canadian border between us closed. My ticket out of Indiana was canceled. I was left with a flight credit and a hopeless feeling, as we learned to ration toilet paper and live with looming threat.

Candice passed away on April 16. She was 35. I was one of the few who could watch the funeral, live-streamed. I promised that the moment I could fly and we could all be together, I’d help her family with a feast and memorial. They buried her in moccasins with beaded purple butterflies that her cousin had made by hand, size seven. Her eldest son wore a buckskin jacket with arrows on its back, and it would have made her proud. Candice was about Native Pride, because she knew the stories of her people and how hard they fought to keep traditions and their languages alive. The last time I hugged her, she put sweet grass in my hand and told me to be good.

Read More: ‘We Know What Is Best for Us.’ Indigenous Groups Around the World Are Taking COVID-19 Responses Into Their Own Hands

Candice and I had worked hard to be more than the statistics against us. We dreamed of being away from men who hurt us. Financial independence meant freedom from cheaters and abusers. It had felt good to see us becoming. She drove a Dodge Journey with a sunroof top and leather seats that were too big for her. We bonded over upgrades like that—with every new thing we could afford, we’d laugh about our old lives. Our last visit, before cancer, we went cruising after one of my book events.

“Look at you living!” I marveled at her wide dashboard and satellite radio.

She was one of the few true witnesses to my struggle, and I hers. When she died, I considered how much she had survived. She knew the long haul of bringing our traditional ways back, and wanted to heal from genocide and all the things our parents and ancestors had lived through. I knew the only thing I could do with my grief was honor Candice’s conviction to know our roots. I was a rez girl from Seabird Island Band. I grew up with a sweat lodge in my backyard, and a mother who would fast for four days on a mountain alone.

I moved deeper into my people’s ways. Cut my hair, swallowed oil. I prayed every day. I tried to live how I thought Candice would want me to. She was always the one to tell me we were Indian women, and that meant we could do anything, bear anything, recover from trauma, live for our children.

Then, in the summer, my friend Bryan descended into a lonely place. We had graduated together from the Institute of American Indian Arts. I met him at a reading, where he read a poem about his sister and him, surviving through negligence and poverty, experiencing hardships that reminded me of my own. We bonded in the dorms.

The isolation of the pandemic was getting to him. He messaged me that he was “slipping into a bad space.” I called him and told him, if he died, I couldn’t bear it. I got him to talk about his poems, and about his manuscript, and thought that was enough. He sounded hopeful, and okay.

Weeks later, he was gone. An overdose. He was self-medicating. Hospitals turned him away, and he sent me cries for help, but I didn’t call the police, because a wellness check could kill an Indigenous person. I should have seen the signs. He had booked a flight to Vegas, and told me he knew it would be a risk, but tickets were only $28, round trip. He was immunocompromised, after years of dialysis and a kidney transplant. This was my closest friend after Candice. The only one who answered my midnight texts, and the first person I showed my work to. He sent me weekly poems like gifts, with lines like, “A thousand yellow florets, burning–The Sun.” He was Ojibwe. His favorite stories were about underdogs. He loved Gossip Girl, Endymion by John Keats, Natalie Diaz, poker, pull-tabs and Modelo.

His funeral was eight hours away, and the COVID-19 numbers were scary. I prayed to my mother about it. I decided, if I had missed one opportunity to say goodbye to a friend, I wouldn’t miss another. My husband and I drove to the funeral on little sleep and no food.

As we pulled into the graveyard, I took a sleeping pill by accident instead of my antidepressant. I thought I would feel hollow and numb, but Bryan’s sister sobered me when she asked for a hug and I couldn’t say no. I have to admit it was healing to touch someone who knew him that deeply. I saw Bryan’s face in his little cousins and listened to the remarkable wisdom of his family and his people, who held him like a beloved and gave firm instruction about how to honor him. We were to make a fire, make him a plate of food and pray for him. We were to let go of fear and grief—to feel good things because what we felt below, he’d feel above.

These instructions felt as firm as my mother’s teachings. I felt honored to carry them out. But when my brother, husband and I made Bryan’s fire, we argued over which way the four directions were before we prayed. We call on the directions for power. My mother would have bopped us on the head when we had to use the compass on a phone. The three of us finished offering Bryan’s plate to the fire. When we came back inside, the leftovers—green chile enchiladas and beans—were on the stovetop, and my son had eaten some.

“You let Isaiah eat the spirit food?” I asked my husband.

We cleansed ourselves, burning sage given to me by a cousin. I wasn’t sure if we needed to cleanse our basset hound and shih-tzu before we let them in the house. My brother agreed it couldn’t hurt.

“I think they’re more sacred now,” I told him. And the dogs did seem more Indian.

Our mistakes and uncertainties seemed huge in the moment. The next day, though, my mother’s best friend Gerry assured us it was about the intention and heart. I imagined my elders would be proud, because these practices, our ceremonies and feasts, were all forbidden during a time by the Canadian and U.S. governments. I am no less Indian for forgetting the tenses and syllables of a prayer because my grandmother was no less Indian for having those teachings beaten out of her in Indian boarding school. I’d like to believe my mother stumbled during her first fasts and ceremonies.

After that night, we all felt closer to Bryan and to our people. I thought of the medicine man who gave me my name, and how he taught me about entropy—the way a body holds our origins and stars—and how, after he built our sweat lodge, willow and tie by willow and tie, he ended the day by watching Die Hard. He always asked me to “put on something with explosions!” My mother held this duality, too, carrying ancient practices when it’s easy to forget them, and so would I. We would stumble, in this new life, but find congruence and ceremony for our dead. I imagined how my great-great-grandmother might have felt, carrying ceremony for those who passed during the smallpox epidemic, and how unnatural it might have felt, to mourn so much death.

All of my people do this, as our ancestors did before: hold the new world and our own in both hands, with collective grief and love. 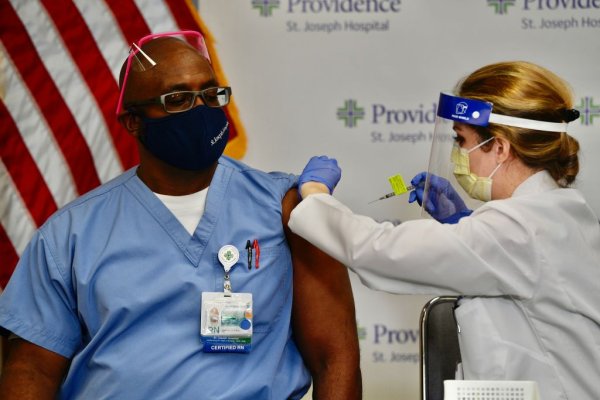 Why Black Americans Distrust the New COVID-19 Vaccines
Next Up: Editor's Pick