Sometimes a downer of a movie can make you feel a little better about life, serving as a reminder that things aren’t as bad as they could be. The Midnight Sky, a glum science-fiction reverie directed by George Clooney—and based on Lily Brooks-Dalton’s novel Good Morning, Midnight—may serve that function for some people. At its best, the film shimmers with a thoughtful, poetic moodiness. At its worst, it’s pretty damn slow. But Clooney—who also stars, as a crabby, obsessive scientist bearing the comically hifalutin name Augustine Lofthouse—is at the very least a thoughtful filmmaker, and The Midnight Sky is made with obvious care. What’s more, he’s modest enough to make himself a fairly muted presence, allowing his supporting players to shine.

As The Midnight Sky opens, a cataclysmic event—it goes unnamed and undescribed, a spooky touch—has destroyed most of the Earth’s population. Nearly every inhabitant of an Arctic scientific-research station has evacuated in advance of encroaching danger, but grizzle-bearded Augustine, who is gravely ill, has stayed behind. His passion has always been seeking out new planets that might prove sustainable to Earthlings, though his devotion to science is so dogged that he’s had little use for actual human beings. But as life on Earth, including his own, slouches toward an end, he feels bound to warn a returning space-exploration crew that they’re better off staying in space. The signal at the station isn’t powerful enough to reach them; he must set out in the frigid cold for another base, miles away, that might have a stronger antenna. The twist is that although he believes he’s alone at his deserted outpost, a stowaway suddenly appears, a young girl who hasn’t gone off with the others. She doesn’t speak, but the two learn to communicate, and grudging affection ensues. Augustine learns that the girl’s name is Iris. (She’s played by Caoilinn Springall.) Together, the two set off on their perilous journey.

Meanwhile, we learn a little more about that ship, the Aether, and its crew, Adewole (David Oyelowo), Sully (Felicity Jones), Sanchez (Demián Bichir), Mitchell (Kyle Chandler) and Maya (Tiffany Boone), the least experienced of those aboard. The scenes aboard the Aether have a kind of lost-in-space cozy warmth, and it becomes easy to see these astronauts as individuals with deeply human anxieties and longings. Sanchez is especially fond of sweet Maya, who reminds him of his daughter. Sully is pregnant, and though she seems perfectly cool with the idea of having a tiny human being inside her while she’s floating around in nowheresville, Jones’ aura of no-nonsense practicality suggests she knows how high the stakes are. Best of all is Chandler as the deeply homesick Mitchell: in one scene, he has breakfast with his family, rendered as holograms—they chat and laugh and flutter around him, as he sits there eating his sad bowl of space oats. Mitchell’s heartsickness is like a spirit-ghost that sticks close by him, so intense you can almost see it. Chandler, always a wonderful actor, takes this small role and turns in one of the finest performances of the year, tucked into a movie that doesn’t measure up to him.

Clooney certainly cares a lot about every project he takes on. As a director, maybe he sometimes even cares too much. His overly cerebral approach can result in seriously unleavened movies (like the dirty-politics parable The Ides of March, from 2011), though a less conscientious guy couldn’t have made the elegant, fiery Good Night, and Good Luck (2005), an account of journalist Edward R. Murrow’s tireless battle to bring down anti-Communist crusader Joseph McCarthy. In The Midnight Sky, Clooney’s portrayal of Augustine has a great deal of somber dignity; he’s brainy all right, but with none of the groovy jauntiness of the astronaut Clooney played in Alfonso Cuaron’s Gravity. Clooney is both a fine actor and an immensely charismatic presence. But even if he has every right to take on grave, serious-minded roles, there’s something dispiriting about seeing him as a forlorn, graying, beaten-down survivor, a brilliant scientist left alone to ponder the mess he’s made of his personal life—albeit with a tiny sprig of hope at the movie’s end. But maybe Augustine’s purpose is to cheer us up in a perverse way. Our lives could be worse; we could be him, a sad-sack scientist who looks like a woodcarving in a medieval cathedral, or a bummed-out Santa who’s let himself go. This is George Clooney, bona fide movie star, at the close of 2020. Maybe the end of the world really is upon us. 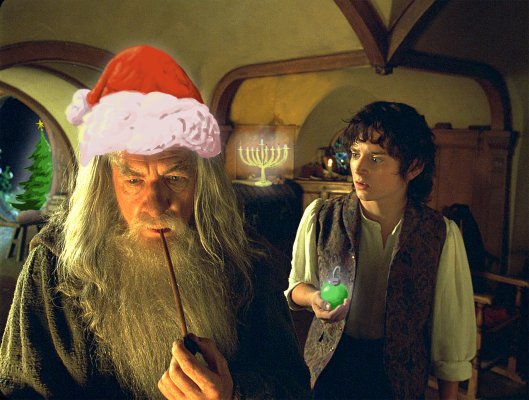 Why the 'Lord of the Rings' Movies Are Holiday Movies
Next Up: Editor's Pick