Wonder Woman 1984 isn’t great and it isn’t terrible. It’s a movie that has simply arrived at a time when people need a diversion, and following a summer devoid of blockbusters. Everybody could use some fun, and the studio behind the film, Warner Bros., has made the responsible decision to release it in U.S. theaters and on HBO Max on the same day, Dec. 25. Even if it’s not nearly as much fun to watch a superhero movie at home on the small screen—even on a large-ish small screen—it’s a safe option at a precarious time.

Superhero movies are supposed to be mindless fun, or they’re supposed to be inspirational tools for living, depending on whom you ask. But either way, it’s hard to know how to read them right now, and Wonder Woman 1984, directed by Patty Jenkins, doesn’t solve that problem. The plot is elaborate but undistinguished: in this film’s predecessor—the 2017 Wonder Woman, also directed by Jenkins and also starring Gal Gadot in the title role—Amazon princess Diana Prince, in her superhero guise, stopped World War I and also fell in love with the first man she ever met (sweet, brave American pilot Steve Trevor, played by Chris Pine). Wonder Woman 1984 finds Diana living in Washington, working as an anthropologist and archaeologist at the Smithsonian, the quintessential single woman who’s devoted to her career: Steve, the love of her life, is dead. In what may be the movie’s best moment, a delicate and unlabored one, Diana sits alone at an outdoor café table, and after ascertaining that no one is joining her, the waiter whisks the extra menu away. Especially when you outlive the ones you love, being a superhero is not always so super.

Read more: 2020 Was Supposed to Be a Banner Year for Women Directors. Then COVID-19 Hit

But Diana does make a new friend when nerdy fellow anthropologist Barbara Minerva (Kristen Wiig) comes to work at the museum. At the same time, a curious relic shows up in the department’s collection of ancient stone gewgaws. Barbara dismisses it as a useless novelty carved from a hunk of citrine, but it turns out to have mysterious, wish-granting properties. Diana benefits, inadvertently, from this stone’s sacred hoo-hah: it brings Steve back to her. But its powers also wreak havoc when down-and-out TV motivational speaker-type and wanna-be oil tycoon Maxwell Lord (Pedro Pascal, from Game of Thrones and Narcos) gets a hold of it. Soon, there’s a megalomaniacal nutjob in the White House—as if that’s never happened.

The stone also confers some scary gifts upon Barbara, transforming her from a gangly, brainy, funny academic into a far less interesting supervillain, the Cheetah. As Maxwell Lord’s power increases—a mega-metaphor for 1980s-era greed and selfishness—the world begins to fall apart. Diana, thrilled to have Steve at her side to help, has to step in to save it, armed with her zinger crown and other superhero accouterments.

Maybe it’s time to consider just how workaday the superhero-movie version of saving the world really is. Gadot is a charming, vital presence: you’d have to be made of concrete not to respond to her. Yet even though she looks stunning in her red-and-blue Wonder Woman garb—and at one point shows up in a suit of golden armor that transforms her into a glorious art deco bird—Gadot is most engaging as Diana Prince. Her human weaknesses are her most compelling feature. But just being a woman is never enough for anybody. In addition to saving the world, Diana-as-Wonder Woman is frequently tasked with saving little girls from danger—she whisks them to safety with a wink, and they beam at her appreciatively, so grateful that at last they have a superhero of their own.

Why do we always have to be reminded of Wonder Woman’s purpose? Why can’t she just be? The 2017 Wonder Woman held some promise that a new breed of superhero movies directed by women, and starring women, might actually be less formulaic than the guy-centric ones. Jenkins and Gadot built some wit into the thing: Diana, having been raised in a society of fiercely self-sufficient women athletes and warriors, had never seen a man before Steve Trevor dropped into her sights, and she had some fun figuring out the mysteries of this adorably inferior creature. Now, in addition to swinging her magic lasso around now and then, she’s saddled with a few too many dull, lofty speeches about truth. This, apparently, is the equality we fought for.

I can hear the outcry now: “But my daughter loves Wonder Woman! She feels empowered when she puts on her Wonder Woman costume!” All of that is fine, as far as it goes: Who wants to stomp on little girls’ fun? But little girls also deserve better movies, not just dutiful, sanctimonious versions of the testosterone-fueled ones. As an amusement designed to take the world’s mind off its problems for a few hours, Wonder Woman 1984 is perfectly suitable. But it’s also OK to wish for less noise and more wonder, especially in a world that’s filled with the former and sorely in need of the latter. 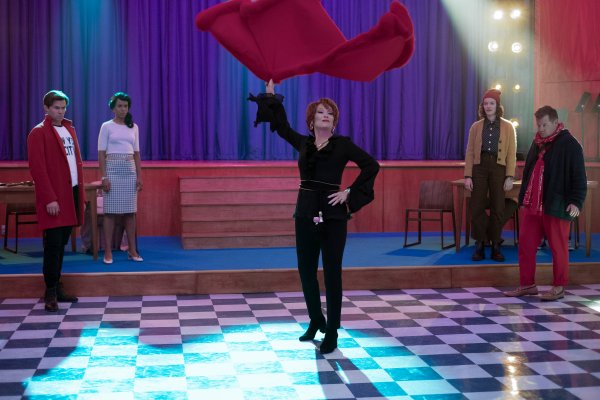 Meryl Streep Has Nothing Left to Prove. The Results Are Downright Delightful
Next Up: Editor's Pick