People Are Finally Downloading COVID-19 Exposure Notification Apps. Will They Make a Difference?

Notify CA app will send notifications to a user's cell phone alerting them if they have been in close proximity to someone who has tested positive for coronavirus.
Leonard Ortiz—MediaNews Group/Orange County Register/Getty Images
By Alejandro de la Garza

In the early weeks of the U.S. COVID-19 outbreak this spring, technologists pushed forward an idea to help bring the spread of the new virus under control: smartphones could notify users who had potentially been exposed to others with COVID-19, transforming millions of devices into the world’s most efficient army of public health contact tracers. Big tech got on board, with Apple and Google jointly releasing software in May that enabled state and national public health departments to build such “exposure notification” (EN) apps.

But as the pandemic burned through the country, slow development, sparse public outreach and suspicion of the new software from both states and users stymied the effort for months. Over the summer, only six states released apps using the software; just four more joined by October. Even in states that released EN apps, adoption was often agonizingly slow, with downloads far outpaced by similar efforts in countries like Ireland, where around a third of adults were using COVID-19-tracking apps as of November. In Alabama, only 3% of the state’s adult population had downloaded the state’s EN app by late October, more than two months after launch; by early December, that number was still just 4.6%. North Carolina and Pennsylvania, which both launched EN apps in late September, each managed to get around 6% of their adult populations on board as of early December.

But EN app adoption rates in some states are now skyrocketing by comparison, thanks in part to a new approach from Apple and Google. States using the new protocol, called Exposure Notifications Express (EN Express) and launched in September, can quickly and easily deploy a basic, pre-formatted version of the Apple/Google-enabled contact tracing apps, saving costs and development time. EN Express also lets states send push notifications encouraging residents to opt in, a feature that appears to be driving faster adoption.

Some states that recently launched apps with the updated approach have leapt ahead in sign ups, offering a glimmer of hope that smartphone-based exposure notification technology might finally start helping to mitigate the spread of COVID-19 in the U.S. Colorado, which launched EN Express in late October, signed up the equivalent of more than 28% of adults by the end of November. In Washington state, which launched EN Express on Nov. 30, nearly 17% of the state’s adults enabled the software in just four days. Adoption of Connecticut’s EN Express app topped 20% less than a week after it launched in mid-November. California’s state health department estimates that 13% of adults opted in within a day after it launched an EX Express app on Dec. 10. And in Nevada, where only 5% of adults were using an app published in late August, the launch of a complimentary EN Express service on Dec. 10 led to adoption of more than 9% in just four days.

Nowhere is the contrast between the old and new systems sharper than in Maryland and Virginia. Virginia launched the first U.S. Exposure Notifications app in August, and slowly accumulated users through aggressive outreach in what had been one of the country’s most successful adoption efforts so far; 13% of Virginia adults were signed up by December. Just across the border in Maryland, officials launched the state’s first exposure notification app, using EN Express, in mid-November. By month’s end, more than a quarter of the state’s adults had signed up, leapfrogging Virginia’s months-long effort in just weeks.

“Our delay was somewhat intentional,” says Kathleen Feldman, chief public health scientist at Maryland’s Department of Health. While Virginia was rushing to deploy a contact tracing app this summer, Maryland public health officials put their resources toward traditional contact tracing efforts while waiting to see how newer digital efforts worked out elsewhere, Feldman says. When Maryland’s program finally launched, they were able to take advantage of EN Express, which was not available when Virginia launched its app.

Colorado officials also intentionally waited to deploy an Exposure Notifications app. “When EN Express became an option, it was clear to us that the technology had matured,” says Sarah Tuneberg, leader of Colorado’s Coronavirus Innovation Response Team. Among the factors that helped spur adoption, Tuneberg cites the simpler user experience (on iPhones, for instance, users can turn on EN Express in their settings instead of downloading an app) as well as the fact that the state didn’t need to contract a private developer to build its app, and could devote those resources toward outreach instead.

“We know that states don’t have great adoption of apps you have to download from an app store,” says Tuneberg. “There was a service that didn’t require us to pay six, seven, eight figures…it just made it the right time for us.”

In Virginia, officials are planning to launch EN Express to supplement their contact tracing app (the two approaches are intercompatible, and both use the same underlying system). But other states, like North Carolina, Alabama and Delaware, which have released coronavirus-tracking apps but where adoption has been slower than that of many states using EN Express, still don’t have plans to use the newer tool. Representatives at Apple say they recommend all states adopt EN Express, even if they have already built their own app.

Still, even in states with high adoption rates, it’s difficult to tell how much difference the software is making in the fight against the pandemic. Health officials and technologists often argue that 15% adoption could reduce COVID-19 infections by 15% and deaths by 11%, a statistic based on modeling published by Oxford University and Google this fall. Either way, with EN Express substantially reducing the upfront investment for state governments, it seems likely that more states will get on board. “I think [EN Express] is helping,” says Tuneberg of Colorado. “The funny thing about a global pandemic is that you don’t have a control group, so we won’t ever know exactly how efficacious it was. But it’s not harming anything.” 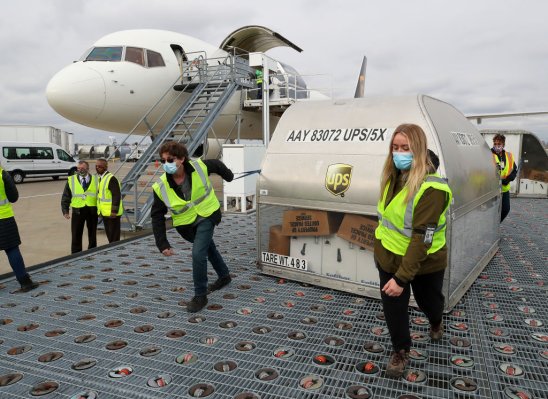 The Trump Administration's 'Operation Warp Speed' Has Spent $12.4 Billion on Vaccines. How Much Is That, Really?
Next Up: Editor's Pick