The Trump Administration's 'Operation Warp Speed' Has Spent $12.4 Billion on Vaccines. How Much Is That, Really?

In mid-July, the U.S. federal government made an agreement with Pfizer, one of several pharmaceutical companies working to develop a COVID-19 vaccine. The $1.95 billion deal would finance the production and nationwide delivery of 100 million doses of the vaccine, should it be approved by the U.S. Food and Drug Administration.

That approval came on Dec. 11, when the Pifzer vaccine, co-developed with German biotechnology firm BioNTech, became the first in the U.S. to receive emergency use authorization from the FDA. The first batches are now being distributed, per that July agreement. But in the days leading up to the authorization, revelations about the terms of that initial deal raised questions about why the government did not agree to secure more than 100 million doses, which, because recipients need two doses spaced three weeks apart, is only enough to inoculate 50 million of the country’s roughly 328 million residents, at most.

The New York Times reported on Dec. 7 that the U.S. declined Pfizer’s offers for additional doses. The company went on to ink contracts with other governments, including the European Union, which secured 200 million doses. On Dec. 8, Pfizer board member and former FDA head Scott Gottlieb confirmed the Times’ reporting on CNBC.

In response to that reporting, the U.S. Department of Health and Human Services (HHS) has pointed out that the U.S. has several irons in the vaccine fire. The federal government has invested in a portfolio of six promising vaccine candidates through its Operation Warp Speed program, which is aiming to begin delivery of 300 million vaccine doses by next month. Moreover, there was no guarantee that the Pfizer vaccine, which is based on an experimental mRNA technique, would be approved, or that it would be as effective as studies have shown that it is.

Other pharmaceutical companies, including Johnson & Johnson, AstraZeneca and Moderna (whose vaccine is currently being evaluated for FDA emergency use authorization) all received U.S. government money for vaccine development and entered into approval-based acquisition agreements like Pfizer’s. Neither Pfizer nor BioNTech took funds from the government to develop its vaccine, only to manufacture and distribute it when and if approved.

HHS, which signed Pfizer’s July contract along with the U.S. Department of Defense, says the Trump Administration committed to 100 million doses because Pfizer had offered a delivery schedule for those doses, and negotiations with the company for more are ongoing. The agency added that the government never declined Pfizer’s subsequent offers and that it “has been asking Pfizer for a delivery schedule for doses in excess of the original 100 million so that we could finalize an updated agreement.” Last month, Pfizer said it would ship 50 million doses worldwide by the end of the year, about half of its earlier estimates. Of those, about 20 million would go to the U.S., Gottlieb said, and the remainder of the U.S. order would be fulfilled by March.

Regardless of whether the government declined Pfizer’s offers, or whether Pfizer has failed to provide delivery assurances, it’s becoming clear that the U.S. may not have committed to enough doses to put itself ahead of other economically advanced countries, despite that the Operation Warp Speed program allocated more than $12 billion to vaccine makers.

But it is comparable to other recent federal initiatives, like the $12 billion 2018 farmer relief package to offset losses from the U.S.-China trade war, or the $11 billion acquisition of 98 F-35 strike fighter aircraft this year, or the roughly $14 billion average annual spending in response to hurricanes and wildfires since 2017:

A Bloomberg analysis of 80 agreements between vaccine manufacturers and governments found that the U.S. ranked 32nd in per-capita vaccine reservations. (Canada, the U.K. and Australia are at the top of the list, followed by 27 European Union countries and Chile.) However, after that analysis, and on the same day that the FDA approved the Pfizer vaccine, the U.S. government purchased 100 million doses from Moderna, doubling its initial commitment from August and bringing the Moderna total up to 200 million doses. (Moderna’s vaccine, like Pfizer’s, requires two doses per person.)

To be sure, the breakneck pace of COVID-19 vaccine development is a major accomplishment, given that such a process normally takes years—and certainly much credit goes to the Operation Warp Speed investments. To get a winning vaccine as fast as possible, the government placed wide-ranging bets, and secured 900 million doses between all six companies, which is more than enough for the U.S. population, assuming they all produce a winner.

If additional vaccines get FDA approval, that strategy may very well pay off. If not, then once the initial Pfizer vaccine supplies are distributed to high-priority groups like front line health care workers and nursing home residents, the rest of the U.S. will have to wait for Pfizer and the government to come to an agreement, while waiting in line with both their fellow Americans and citizens elsewhere. 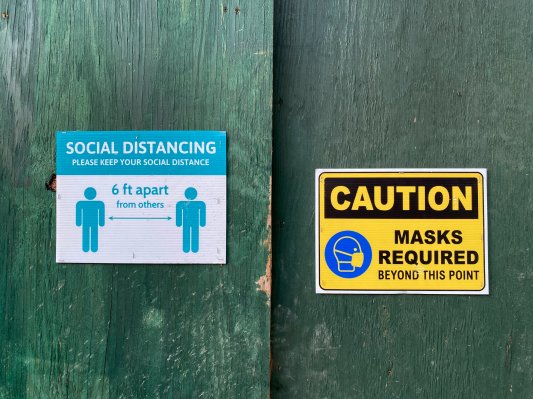