Democratic Hawaii Rep. and former 2020 Presidential candidate Tulsi Gabbard introduced a bill into the U.S. House of Representatives on Thursday that would dictate Title IX protections for female athletes be based on biological sex—a term often used to refer to gender assigned to a person at birth—thats advocate have decried as inherently transphobic.

Title IX prohibits discrimination on the basis of sex in any educational program or activity that receives federal funding, and is well known for its requirement that women’s sports programming receive equal support to men’s programming.

Gabbard, who declined to run for re-election in 2020 and is in the final days of her Congressional term, introduced the bill, titled the “Protect Women’s Sports Act,” with Republican Oklahoma Rep. Markwayne Mullin. Republican Georgia Sen. Kelly Loeffler introduced a similar bill, titled “the Protection of Women and Girls in Sports Act,” into the Senate in September. (Loeffler’s bill has not been taken up for a vote.)

“Title IX is being weakened by some states who are misinterpreting [it], creating uncertainty, undue hardship and lost opportunities for female athletes,” Rep. Gabbard said in a statement. “Our legislation protects Title IX’s original intent which was based on the general biological distinction between men and women athletes based on sex.”

“Title IX was designed to give women and girls an equal chance to succeed, including in sports,” said Rep. Mullin in a statement of his own. “Allowing biological males to compete in women’s sports diminishes that equality and takes away from the original intent of Title IX.”

If implemented into law, the bill would deny federal funding to schools that “permit a person whose biological sex at birth is male to participate in an athletic program or activity that is designated for women or girls.” It was immediately decried by LGBTQ+ advocates.

“It’s shameful that one of Rep. Gabbard’s last acts in Congress is to attack trans youth,” said Chase Strangio, deputy director for Trans Justice with the ACLU LGBT & HIV Project in a statement provided to TIME. “While this bill will not advance, it has already sent a dangerous message to trans youth and is spreading the same lies that are fueling attacks on trans youth in state legislatures.”

“Rep. Gabbard’s harmful and unnecessary bill is not about protecting girls and women’s sports. There’s no evidence in the 18 states with policies that allow transgender athletes to participate on teams consistent with their gender identity that inclusion negatively impacts athletic programs,” added GLAAD’s Alex Schmider, Associate Director Transgender Representation. “This is more about opportunistic people like Rep. Gabbard who, under false pretense, claim to be protecting girl’s sports to justify discrimination.”

Mara Keisling, executive director of the National Center for Transgender Equality, concurred, describing Gabbard’s “play for attention” as “embarrassing” in a statement. “She should be ashamed of trying to burnish her right-wing credentials with attacks on transgender student athletes,” Keisling’s statement continued. “It’s just a hurtful attempt to get on TV without any regard to the damage such rhetoric does to transgender kids.”

Gabbard did not immediately respond to TIME’s request for comment on the backlash.

Gabbard’s record on LGBTQ+ rights received increased scrutiny during her 2020 presidential campaign. In the early 2000s, she worked for her father, Hawaii state Senator Mike Gabbard, and his anti-gay organization The Alliance for Traditional Marriage, that campaigned against the legalization of same-sex marriage in Hawaii. She has since publicly reversed her position and signed an amicus brief challenging the Defense of Marriage Act in 2013.

“In my past I said and believed things that were wrong, and worse, they were very hurtful to people in the LGBTQ community and to their loved ones,” Gabbard said in a video apology posted shortly after she announced her presidential candidacy. “My views have changed significantly since then and my record in Congress over the last six years reflects what is in my heart: a strong and ongoing commitment to fighting for LGBTQ rights.”

Yet advocates argue the introduction of “Protect Women’s Sports Act” goes directly against those commitments.

A number of state legislatures have tried to pass legislation over the past year aimed at prohibiting trans women and girls from participating in female sports teams. Idaho Gov. Brad Little signed the “Fairness in Women’s Sports Act” into law in March, which said no female sports teams could be open to “students of the male sex” and a “dispute” could be resolved by presenting a signed physician’s statement on the student’s sex based on their “internal and external reproductive anatomy.” A federal judge struck down the law in March, writing that the state had not provided a “legitimate interest” the Act served “other than an invalid interest of excluding transgender women and girls from women’s sports entirely, regardless of their physiological characteristics.”

“This is a victory for all women and girls in Idaho,” the ACLU tweeted at the time. “Trans people belong in sports.” 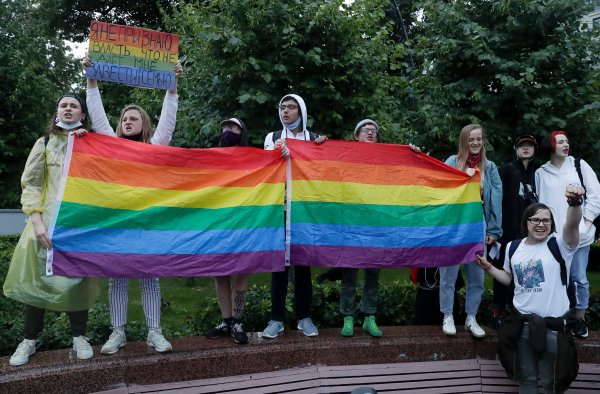