A new adaptation of Stephen King’s classic novel The Stand is set to debut on Dec. 17. Whether or not we can handle it in 2020 is another question.

Nine hour-long episodes on CBS All Access will attempt to tackle King’s massive novel from 1978 about ye olde struggle of good versus evil. This expansive story takes place against the backdrop of a pandemic in which seven billion people die from a grisly disease. The survivors among the U.S. population converge upon two locations to rebuild—and wage war on one another. Some are called to a benevolent Mother Abigail, played by a solemn Whoopi Goldberg, who says she has a direct line to God. Some are driven to the devilish Randall Flagg, played by a pompadoured Alexander Skarsgård, who promises to make people whole if they worship him.

The Stand is perhaps the most influential story about a pandemic from the 20th century, and some might question the decision to launch it in the middle of an actual pandemic. But showrunner and co-creator Benjamin Cavell maintains that the heart of the story does not lie in a deadly viral outbreak like the one which has killed more than 300,000 Americans.

Read more: Stephen King on Doctor Sleep Donald Trump and Why He Often Writes About Children

“For me, The Stand is not really a book about a pandemic,” Cavell tells TIME. “Of course it features a pandemic in it, but really it’s about what comes after and this kind of elemental struggle for the soul of what’s left and the soul of humanity.”

That perspective is understandable given the larger text. But in the four episodes made available to screen in advance, at least, the gruesome “Captain Trips” pandemic is central. As the show progresses, assuming that it follows the book, that’s sure to change. The time it takes to get there, however, can be an uncomfortable viewing experience given the year we’ve all had.

The show, which also stars James Marsden, Amber Heard, Jovan Adepo and Greg Kinnear, finds its own tone after an episode or two, becoming an engrossing tale. You just have to wade through the now-shockingly familiar empty streets of New York City with Adepo’s Larry Underwood to get there.

The onset of the COVID-19 pandemic significantly impacted the production and post-production of The Stand; Cavell says it would be “ridiculous” to suggest otherwise. In fact, filming wrapped at daybreak on March 12, just a few days before states began enacting shelter in place orders. As post-production work began and the pandemic grew more severe, there was even a discussion about whether to mention the novel coronavirus in the show.

“There was a suggestion that maybe someone should reference ‘This is even worse than COVID,'” Cavell said. “And the idea, frankly, of trying to make a show about a world that had been through COVID and come out on the other side, but was [currently] being hit by this, it just seemed so dishonest to us.”

But even back in 2018, as production began for the adaptation and before COVID had become a household term, Cavell found King’s novel to be prescient. “I thought the book was eerily relevant,” Cavell said. “It is asking really fundamental questions about civilization. What are the underpinnings of human society? What are the agreements that a society makes with the individuals who make it up? What does a society owe to those individuals?”

According to Cavell, the story for this adaptation was also constructed to focus less on what comes after the outbreak. Instead of telling a linear tale, it jumps around between a world slowly succumbing to the apocalypse, one in which characters are slowly uniting and the eventual process of rebuilding society.

The challenges of adapting The Stand did not end with creative choices around depicting a public health emergency. King’s book contains a number of issues and characterizations that don’t sit well in 2020, if they ever did at all. The few people of color in the story are overwhelmingly characterized by their race, including Mother Abigail, who can be seen as a quintessential deployment of the “magical negro” trope. The story contains multiple characters with physical or intellectual disabilities, often depicted solely through the lens of said disabilities.

The full brunt of these issues can be seen in the novel’s 1994 TV adaptation. That miniseries, which starred Gary Sinise, Molly Ringwald and Rob Lowe, attempted a straightforward telling of King’s story, hewing very close to the source material. It makes for a cringe-inducing rewatch. Cavell quickly recognized the issues both within the text and in the ’90s miniseries, and says the team behind the new series worked to avoid the same pitfalls. In fact, he says they decided not to revisit the old adaptation at all, fearing that it would hold too much influence over their own process.

To Cavell, it was top of mind to rework at least some of King’s characters and to bring greater, more thoughtful representation to the 40-year-old story.

“It was hugely important to us that if we were updating this book for 2020, then the characters had to look like the America of 2020,” Cavell said. “We did that in part by being open in terms of casting a bunch of characters who in the book are all white and male. And certainly a character like Mother Abigail, you get an enormous amount of mileage out of casting Whoopi Goldberg because she has so much heft and gravitas and humor and self-effacement and intelligence and all those things that she just brings with her.”

He credits Goldberg for keeping her character away from an unbelievable, regressive stereotype.

“She was adamant about avoiding what she calls the ‘magical negro’ trope that I think we’re all aware of,” Cavell said. “As Whoopi would say to me, ‘[Mother Abigail has] buried husbands, she’s cheated on people, she’s run around, she’s sowed her oats, she’s gambled, she’s been drunk, she’s lived.’ You feel that from Whoopi, but I do think it contributes to her not being this messenger, messianic figure, but a real person.”

Withstanding the test of time

Cavell also revisited the novel’s Christian themes. In the book, Mother Abigail claims to be a messenger of God and often quotes from the Bible, but that might not be the whole story, according to this adaptation’s co-creator.

The book’s many fans should take heart in both Cavell’s effusive fandom of King’s work and the fact that the author himself wrote a new ending specifically for this adaptation—which is welcome news given that many find the novel’s original ending to be lackluster.

Perhaps most importantly, Cavell says he understands the lofty place The Stand holds in contemporary genre fiction. It’s certainly one of King’s most popular works. But more than that, it has singularly inspired many great stories told in the 40 years since its publication, which have gone on to influence their own successors.

“Without The Stand, and [Damon] Lindelof has said this a million times, there is no Lost,” Cavell says of the acclaimed creator of Lost, The Leftovers and Watchmen.

It’s this respect for the legacy of The Stand, in all its imperfection, that makes this adaptation an interesting coda to 2020. Whether the later episodes move past the challenge of immersing viewers in a reality that may hit too close to home might just determine its place in the vast universe of interpretations of King’s stories. 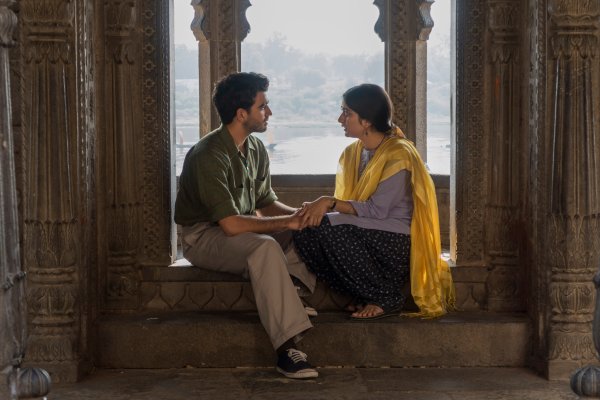