A Mysterious Illness Has Sickened 500 People in India. Here's What We Know – and What We Don't

A patient is assisted by others to get down from an ambulance at the district government hospital in Eluru, Andhra Pradesh state, India, Tuesday, Dec. 8, 2020. Health officials and experts are still baffled by a mysterious illness that has left over 500 people hospitalized and one person dead in this southern Indian state.
AP
By Abhishyant Kidangoor

The headlines have been startling: More than 500 people sickened by a mysterious illness in the southern Indian state of Andhra Pradesh—and doctors can’t figure out what is causing it.

The news has spread across the world in viral fashion, not least because it bears faint echoes of the initial reports—nearly one year ago—of a “mysterious pneumonia-like virus” in the Chinese city of Wuhan. That illness, of course, became the COVID-19 pandemic, which is still raging across the world, having killed 1.5 million people.

But in Andhra Pradesh, the situation is starting to look less dire—though still troubling. On Dec. 7, the state’s health minister ruled out viral infection, as well as air and water contamination. Initial fears of the new illness overwhelming the health system have subsided.

Doctors in Eluru, the city where the illnesses were reported, have told the Indian Express that the number of cases have declined in the past two days and that patients have been recovering quickly. Along with government teams, experts from the World Health Organization are also on the ground. Door to door surveys have been ordered to monitor the health conditions of people as investigation into possible causes continue.

Here’s what we know so far about the mysterious illness sickening people in Andhra Pradesh.

Sai was out with his friends on Sunday when he developed seizures before falling unconscious on the road in his coastal hometown of Eluru. The 21-year-old, who preferred to use only his first name, felt tired and weak when he woke up in the hospital a few hours later. He was back home two days later and has not had any illness since.

“It was so unexpected that I feel like I imagined this whole episode,” he tells TIME.

Eluru has recorded more than 500 such cases of the unidentified illness since Dec. 5, leaving experts baffled and prompting the government to send in experts.

Patients have reported symptoms ranging from nausea, seizures, dizziness and loss of consciousness. The mysterious disease has so far claimed one life in the city, which is home to more than 250,000 people.

What is causing the illnesses?

Doctors still aren’t certain what has caused people to get sick, but they’re starting to form an idea.

A report by India’s top medical body has indicated heavy metal poisoning as the probable cause. Traces of lead and nickel were found in blood samples of 10 patients. However, the source of contamination is yet to be determined.

This comes as India battles the COVID-19 pandemic with the second highest caseload in the world. Andhra Pradesh, where Eluru is located, is one of the worst-hit states and has the third highest number of cases in the country.

Read more: How the Pandemic Is Reshaping India

G. V. L. Narasimha Rao, a federal lawmaker from the state, has tweeted that organochlorines, toxic substances used in pesticides, might be the cause. He said his comments were based on his conversations with senior health officials. In an interview with the Associated Press, Dr. Geeta Prasadini, a senior health official from the state, said that tests are underway to determine if the poisoning happened through contaminated vegetables.

If proved true, this won’t be the first instance of mass pesticide poisoning in India. Three years back, more than 700 farmers in the western state of Maharashtra were hospitalized after exposure to toxic pesticides. And in another case that got international attention, at least 22 children died in a school in eastern India in 2013 after being served contaminated food. Heavy metal contamination is also common with a 2019 report finding that more than 40 million Indians in rural areas consume water contaminated with metals, arsenic and nitrate. 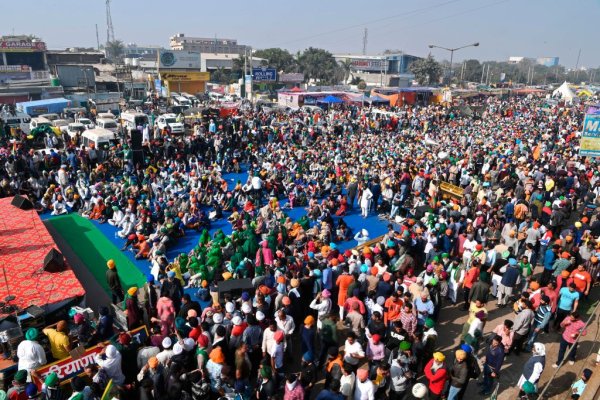 What to Know About India's Farmer Protests
Next Up: Editor's Pick