On Dec. 14, the U.S. death toll from COVID-19 reached a grim, new milestone: 300,000 Americans killed. That’s nearly half of the 675,000 Americans killed a century ago during the 1918 flu, the deadliest pandemic in the 20th century, as historian Christopher Nichols pointed out on Twitter. The current wave of COVID-19 infections is the worst it’s been nationwide and, as TIME reported, cases are expected to continue to rise after Christmas and New Year’s Eve.

The rapid spread today is in stark contrast to this time more than a century ago in 1918. After a first wave in the spring, a deadlier and more contagious second wave hit in early fall. Cities that quickly implemented control measures (mask mandates, closures of schools and public places, etc.) and kept them in place longer, saw lower death rates compared to cities that took fewer of these steps and for a shorter amount of time, a 2007 JAMA study found. In cities in the Northeast and parts of the Midwest, the virus seemed much less threatening by the 1918 holidays, to the point where Americans thought they could gather safely. In the western U.S. however, the virus hit later in the fall, and so the 1918 flu posed a bigger threat to those on the West Coast than the East Coast in November and December.

When looking at the parallels between the COVID-19 pandemic and the 1918 flu pandemic, history offers several lessons on how —and how to not— spend these holidays.

“History is not a perfect template,” says J. Alexander Navarro, Assistant Director of the Center for the History of Medicine at the University of Michigan and the Co-Editor in Chief of The American Influenza Epidemic of 1918-1919: A Digital Encyclopedia. “These are different epidemics, different timelines, and two very different diseases. Although they are both respiratory diseases, COVID is much more contagious than 1918 influenza was… By 1918 when you get to Thanksgiving and then Christmas, the worst of it is over, the large-scale gathering bans and business closures, closing places of public amusements are essentially over. Most communities went ahead and had Christmas services.”

Despite the fact that the two viruses are very different, then, as now, spikes occurred after small family holiday gatherings.

Columbus, Ohio, health officials traced a 27-case flare-up to a Thanksgiving dinner hosted by an elderly woman and attended by her seven married sons and daughters. The Dec. 5 Ohio State Journal reported that the acting state health commissioner said the flu was “one-fourth” as fatal as it was in that October, and mostly appearing in children, attributing the decreased fatality rate to “People have learned how to treat an attack, namely, by going to bed and staying there until fully recovered.”

Public health officials also urged those who did gather in person to keep their distance. “You want to be a little careful whose relatives you kiss, is the state health commissioner’s Christmas advice to girls,” reported the Dec. 21, 1918, Ohio State Journal article headlined “Flu Fighters for Kissless Holiday: Beware of Mistletoe and Be Careful in Osculatory Indulgence, Health Chief Warns.” “His counsel to young men is the same, except a little more emphatic, because more important—some girls still adhering to the custom of ante-feminist days of letting the fellow make the first move. Beware the mistletoe, is his warning to all.”

“Public health officials figured out what tools worked in 1918,” says Christopher Nichols, director of the Oregon State University Center for the Humanities. “They are being cautious about unduly leaping in or being too proactive. They’re following data and disease much better than before, you can see that in the city records. They’ve learned what works and what doesn’t work.”

“It is not in the crowded street cars especially that danger lies, but in the indiscriminate visiting to homes in which there are or have been persons ill with influenza,” Dr. M. Victor Safford of Boston’s health department said in a Dec. 12, 1918 Boston Globe article. “Most of the influenza cases reported in Boston today are traceable to visits to homes of persons who have been or are ill with influenza.”

“Do the people of Milwaukee want a Christmas this year?” was the lede of the Dec. 16 Milwaukee Sentinel. The city’s health commissioner George Ruhland said, “‘Because the health department did not specifically rule against such social gatherings, some people seem to think they are at liberty to follow their own wishes. This is unfair. It means seeking private pleasure when the health of the community is at stake.'”

“To me, the most cogent lesson is that most people in 1918 did celebrate Christmas holidays with their family. And to me, the result was the so-called third wave that began in mid-January,” says Howard Markel, physician and director of the Center for the History of Medicine at the University of Michigan and the Co-Editor in Chief of The American Influenza Epidemic of 1918-1919: A Digital Encyclopedia. “[G]athering while that virus was still circulating was not a good thing. It led to more cases and more deaths. And similarly today, you gather not only at your own risk, but also at the risk of many others around you.”

He also points out that people weren’t getting on airplanes to travel, as many families lived in the same town and multigenerational homes.

Though 1918 health officials didn’t know if they were fighting a virus or a bacterial infection, they did know that masks, when combined with social distancing and frequent hand-washing, slowed the spread of the virus.

That knowledge is clear in the (featured above) cartoon, published on Dec. 6, 1918, on the front page of Indiana’s Fort Wayne Sentinel, which shows two flu bugs unable to infect masked holiday shoppers. The Chicago Tribune also published the below guidelines for shoppers in the Dec. 16, 1918, issue:

There was a surge of shoppers weary of wartime rationing and quarantining in Salt Lake City, the Dec. 21, 1918, Salt Lake Tribune reported: “Thrift and economy have been practiced to a very considerable extent during the past year, and the Spanish influenza hurt business to an almost alarming extent. But the holiday spirit is abroad in the land, and the ‘flu’ is not so much of a menace as it was a few weeks ago.”

In Los Angeles, the health commissioner blamed Christmas shopping for a surge of new cases.

“No special uneasiness may be felt over the increase in the number of cases—in fact the local health authorities predicted it and are pleased that it is no larger,” the Los Angeles Times reported on Dec. 28, 1918. “After Thanksgiving, before the quarantine law went into effect, the cases nearly doubled for a few days. The quarantine has shown its effectiveness in controlling the situation here and a strict observance of its rules will soon bring the bugs to time again.”

Similarly, the format of New Year’s Eve celebrations ranged depending on the state of the epidemic in a given city. Social clubs in Denver cancelled New Year’s Eve balls and holiday parties. In Dayton, Ohio, the newspapers reported that life carried on as if the flu hadn’t happened; cabarets, theaters, and hotels flung open their doors, per the Dec. 31 edition of the Dayton Daily News. The Dec. 31 edition of Omaha Daily Bee reported that “New Year’s Eve will be gay with watch parties” because the city was lifting the bans on parties, but keeping a ban on dancing, and social clubs hurried to organize gatherings to entertain soldiers.

While Americans had much to celebrate over the 1918 holidays, between the perceived containment of the virus and the armistice of World War I, not everyone could muster the usual holiday cheer with empty place settings at holiday dinners, either because of those serving abroad, or loved ones who had passed away in the pandemic.

The day after Christmas, the Salt Lake Tribune reported that, “Observance of the day was possessed of a quiet dignity everywhere that reflected the deep feeling of the city’s dwellers. Not [a] few homes were saddened to a degree darker than their history had before recorded because of the ravages of the influenza epidemic.”

Because the greatest number of 1918 flu deaths were in the 20-40 age range, many children had lost their parents by Christmas. “On a special train, 100 real, live, Christmas dolls were dispatched from New York the other day to many homes throughout the West,” read the caption for a group of children holding their toys that ran on the front-page of the Dec. 13 Indianapolis Star article “Tots Made Orphans by Ravages of ‘Flu’ Come as Christmas Gifts to New Homes.”

The 1918 flu dragged on through the winter of 1919, and some cities facing spikes of new cases after the holidays reimposed public mask mandates.

In San Francisco, an “Anti-Mask League” formed in mid-January 1919 in response to one such a mandate imposed after 600 new influenza cases were reported on January 10. While some people were definitely fed up with wearing masks, it wasn’t as politicized as it is today.

“People are [currently] rejecting these recommendations,” Tom Ewing, professor of History at Virginia Tech, says. “Not because they have any scientific basis for doing so. But because they don’t like either being told what to do, or they don’t believe the people who are saying this, or there’s a political motivation. And that was not the case in 1918. There’s only people who didn’t follow instructions. And there were people who said, ‘the government can’t tell me what to do,’ but not in this organized way that we’re seeing in 2020.”

Globally, about 500 million people were infected with the 1918 flu— or about a third of the population— and at least 50 million died. As Markel and Navarro previously told TIME, the 1918-1919 pandemic is believed to have ended because of what’s referred to today as “herd immunity,” meaning that the virus had infected enough people so that there weren’t enough susceptible people for the virus to continue spreading at pandemic levels.

Though COVID-19 vaccines are beginning to be administered worldwide, many will have to wait several months to be vaccinated. Public health officials are urging Americans to keep up mask-wearing and social distancing, so that as many Americans as possible can celebrate the holidays next year. Mask-wearing, social-distancing, and avoiding indoor gatherings small and large were crucial to slowing the spread of the virus in 1918.

As Nichols puts it, “The December holiday season was a culmination of lessons learned in 1918. The implicit subtext of that is, shouldn’t it be in 2020?” 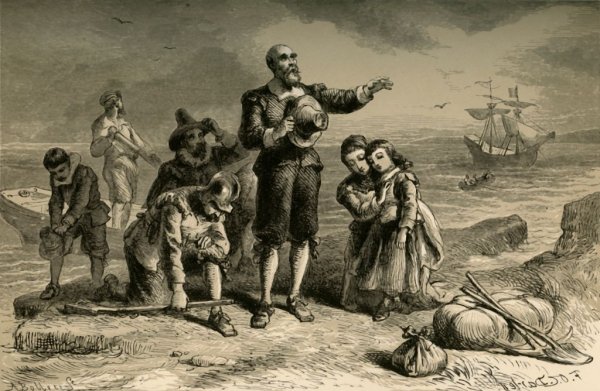 The Evolving Meaning of the Pilgrims and Plymouth
Next Up: Editor's Pick