America's Past Has Shown the Power of 'We.' Here's How We Can Revive It

Trump supporters face off with counter­protesters near the Supreme Court, on Nov. 14 in Washington
Amy Harris—Shutterstock
Ideas
By Robert D. Putnam and Shaylyn Romney Garrett
Putnam and Romney Garrett are the authors of The Upswing: How America Came Together a Century Ago and How We Can Do It Again. Putnam is the Malkin Research Professor of Public Policy at Harvard University and a former Dean of the John F. Kennedy School of Government. Romney Garrett is a writer and award-winning social entrepreneur. She is a founding contributor to "Weave: The Social Fabric Project," an Aspen Institute initiative.

Unprecedented political polarization; deep and accelerating inequality; vitriolic public discourse; a fraying social fabric; public and private self-centeredness–Americans today seem to agree on only one thing: this is the worst of times. But we’ve been here before. The Gilded Age of the late 1800s was much like today.

America then was highly individualistic, starkly unequal, fiercely polarized and deeply fragmented–what we might call an “I” society. However, as the 20th century opened, ordinary Americans, joined by a few extraordinary leaders, bent the course of history, putting America on a “we” trajectory, which produced clear and measurable progress toward greater equality, bipartisanship, connection and altruism.

But sometime during the 1960s, we turned sharply back toward “I,” and the resulting downturn has landed us today right back where the 20th century started. Economic inequality in this country is worse than in more than a century, and politics is more polarized than in any other period since the Civil War. Americans are increasingly aware of their social isolation. The pandemic has also revealed how self-centered we have become, as many of us shun masks and social distancing, sacrificing shared benefits in favor of individual liberties. But our history shows us how we can rekindle a sense of togetherness.

The protagonists who drove the last upswing–when “I” gave way to “we”–came to be called Progressives. They were a diverse coalition whose factions often disagreed about ends and means but who shared a galvanizing belief in the power of ordinary citizens to change the course of history. Drawing lessons from that period could be a game changer for America in this time of transition.

The Progressive Era was characterized by a widespread moral awakening in which the social Darwinist culture of the Gilded Age was roundly rejected. Soul-searching effort on the part of reformers revealed their own complicity in the national crisis. Their moral critique was directed not just outward but also inward. Reformers today who worry about the long run would be wise to emulate that self-critical stance.

Moreover, voices preaching the evangelical Social Gospel and its equivalent in other religious denominations were crucial in triggering that Progressive Era moral awakening. Pope Francis, the Rev. William J. Barber II and religious leaders like them can again play an outsize role in moving us toward a “we” society. Secular small-p progressives today should not shun the power of religious narratives and moral messaging.

Change began at the grassroots. Ambitious new federal programs were the caboose rather than the engine of change. The first truly public high schools in the world were invented around 1910 in small towns in the Midwest, and within two decades this innovation spread to virtually every community in America. Today’s reformers should begin at the state, local and even neighborhood levels. Young people like labor and feminist activist Frances Perkins, municipal reformer Tom Johnson and anti-lynching crusader Ida B. Wells were crucial to reform in the last upswing, and their youthful counterparts, like Greta Thunberg and Alicia Garza, will be today.

Political leaders such as Teddy Roosevelt ushered in national reforms like consumer protection, child-labor laws, anti-monopoly regulation and environmental conservation, but they built on sturdy foundations laid by bipartisan and nonpartisan civic activists at the state and local levels. We should not be looking to charismatic “I alone” politicians to lead us to salvation.

Association was both a goal and a tactic of Progressives, who actively fought the hyper-individualism of the age by inventing new ways to bring people together. Settlement houses, service clubs and civic organizations created vast new stores of social capital that fueled the upswing for decades. Public and private initiatives modeled after them that draw Americans out of their echo chambers will be important now.

The final lesson from the Progressive Era is perhaps the most important: with few exceptions, the “we” the Progressives built was mostly white and delimited by racism. The needs of people of color were largely sacrificed on the altar of progress, a mistake we cannot make again today.

A “we” society is more focused on our responsibilities to one another and less focused on our narrower self-interest. Political differences are kept within reasonable bounds; economic inequalities are minimized; people are connected and willing to cooperate, and share a sense of common destiny.

The history of the 20th century shows that unlike a physical pendulum, pulled by gravity, the societal pendulum between individualism and community–between I and we–does not swing automatically. It is controlled by our choices.

Putnam and Romney Garrett are the authors of The Upswing: How America Came Together a Century Ago and How We Can Do It Again 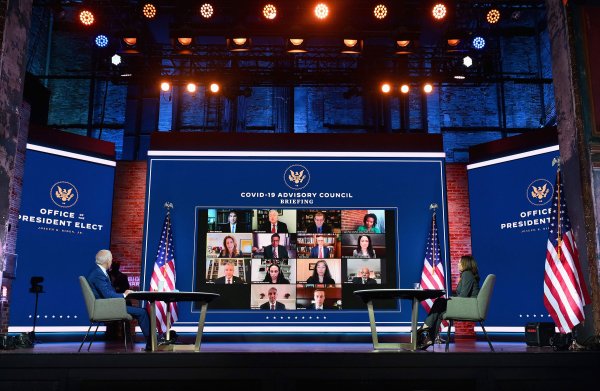 What Biden Needs To Do To Fight COVID-19
Next Up: Editor's Pick