'Undoubtedly' the Greatest: Why the World Is Mourning Soccer Legend Diego Maradona

Diego Maradona is about to dribble through two English defenders in the quarterfinals of soccer’s 1986 World Cup in Mexico. On a whim, however, he spins, somehow keeping the ball attached to his left foot, as if it were a toy and he the child who won’t let it go. And then he’s off—now moving past midfield, a trio of England defenders trailing in his wake. Here comes another English player to stop him; there goes Maradona right by him.

He slips between two more defenders before finishing off the greatest 70-yard charge in World Cup history, culminating in the so-called “Goal Of The Century” that still hasn’t been replicated in this one. England goalkeeper Peter Shilton is the last line of defense: Maradona shimmies to his right, the ball still somehow on his left foot. Shilton slides right past him, before Maradona punches in the goal, giving Argentina a 2-0 lead it would hold onto in this quarterfinal, en route to Argentina’s second World Cup title. The soccer-mad country still awaits a third.

“His greatest achievement, that goal, will forever live in my memory,” says Telemundo broadcaster Andrés Cantor, who has called every World Cup since 1990. Cantor, who grew up in Argentina, was in Mexico at the Argentina-England game in 1986 working in the press box as a correspondent for a Argentine magazine.

“I remember who sat next to me, what we did, how we cried together,” says Cantor. “We could not believe what we had just witnessed. Because I don’t believe we will ever see such an accomplishment in a World Cup. And yes, there were tears of joy, not just from myself, but all of the Argentinian contingent. There was not one person not crying.”

Maradona netted the most jaw-dropping goal in World Cup history just four minutes after scoring the most controversial one. He and Shilton had both jumped for a ball near the net. Maradona knocked in a goal via an illegal handball. “A little with the head of Maradona and a little with the hand of God,” Maradona said, cheekily, of that goal.

How Maradona united the world of soccer

L’Equipe, the French sports newspaper, commemorated Maradona’s death, of a heart attack Wednesday at 60, with a headline on its cover: Dieu Est Mort. “God Is Dead.”

At least a million people are expected to pay their respects in Buenos Aires Thursday as Maradona’s coffin lies in state at the Casa Rosada (“Pink House”) presidential palace. In Naples, where Maradona led Napoli to Italian league championships in 1987 and 1990, thousands of people congregated in streets and in front of the Stadio San Paolo to sing, swap stories and mourn.

“He was the first power figure that united the world of football,” says Cantor. “Everyone, regardless of their nationality, wanted to see him play because of his magic. He made Argentina famous around the world. He made Napoli famous around the world. It’s very hard for any reader to understand what he meant for Napoli. The very poor southern city in Italy that no one paid attention to. And suddenly this kid put Napoli on the map playing soccer and rebelled against the industrial north and beat the powerhouses of Milan and Juventus and Inter who were the more important and powerful teams not only in Italy but in the world and Europe especially.”

Maradona hailed from a shantytown on the outskirts of Buenos Aires and made his professional debut with the club Argentinos Juniors when he was 15.

“I was in the stadium for his first game,” says Enrique Mehl, a Florida psychologist who grew up in Buenos Aires. “Now, that’s become a myth: a million people now say they were there. But I really was. I promise.” Mehl talked to his niece in Buenos Aires on Wednesday. She said the streets were eerily silent, like a cemetery, during the day of Maradona’s death.

The 1986 Argentina-England World Cup quarterfinal, the game in which Maradona certified his legend, carried particular significance for Argentina following the 1982 Falklands War. England prevailed in the military conflict with Argentina over sovereignty of the archipelago some 300 miles off of Argentina’s southern coast.

“Maradona scoring the first goal with the Hand of God, and the second goal being the greatest goal in history, it gave the Argentinians some type or redemption against the English,” says Cantor.

On the World Cup stage, Maradona could not replicate the 1986 title. While he was still brilliant at the 1990 World Cup, Argentina lost to West Germany in the final; in 1994, in the United States, he was kicked out of the tournament for testing positive for ephedrine. Maradona’s demons were well documented: he struggled with drug addiction and voracious appetites. Before Wednesday, he dodged several near-death experiences.

“Diego had died so many times before,” says Cantor. “It’s incredible that he lived this long.”

Despite his imperfections, Maradona will be mourned the world over. Champions League games had moments of silence: one coach recommended that Maradona’s number 10 be retired throughout world soccer. The Vatican announced that Pope Francis was keeping Maradona in his prayers.

“Undoubtedly, for me, he is the greatest player of all time,” says Cantor. “He played in an era much different than today. It was a more physical game. He was butchered in every single game that he played. And he excelled. He had the ball glued to his left foot. His center of gravity was so low. He was just a magician with the ball. An artist. Poetry in motion.” 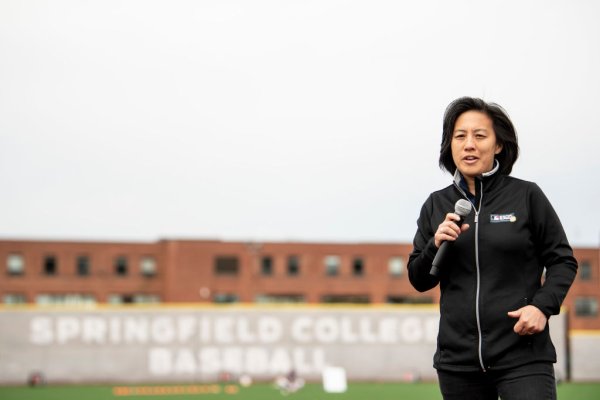 'It's About Time.' For Women Working in Men's Sports, Kim Ng's Historic Hiring Means Everything
Next Up: Editor's Pick