A protester holding a flag chants slogans on a megaphone during the demonstration. A group of approximately 25 people in support of Donald Trump marched around Public Square shouting "Stop the Steal" and demanding a recount of votes in Pennsylvania.
Aimee Dilger–SOPA Images/LightRocket/Getty Images
By Erik Larson / Bloomberg

The Trump campaign is trying to get a federal appeals court to revive a third version of its complaint after voluntarily withdrawing the first one and then seeing U.S. District Judge Matthew Brann issue a scathing dismissal of the second one. Brann refused to let the campaign file yet another complaint, and it is asking the appeals court to overturn that decision. They shouldn’t get a third shot, Democrats Abroad, a group representing overseas voters, said in a filing on Tuesday.

“The attorneys for the President of the United States should not need ‘three last chances’ to coherently state a cause of action,” the group said. “Yet, apparently, that third, last chance is all they seek from this Court.”

The sketch, which begins with the catchphrase “Nobody expects the Spanish Inquisition!” has the British comics playing inquisitors who repeatedly trip over their words as they attempt to tell an elderly woman that she has “three last chances” to admit her guilt before being tortured by silly and innocuous household items.

The filing also noted the irony of the campaign seeking permission to file a third complaint to fix what it says were a number of errors when the suit itself demands that about 70,000 mail-in ballots in Pennsylvania be invalidated based on minor errors made by otherwise qualified voters. Moreover, the group said, the campaign has failed to present “one iota of proof” to back voter-fraud conspiracy theories Trump has been tweeting “for months.” 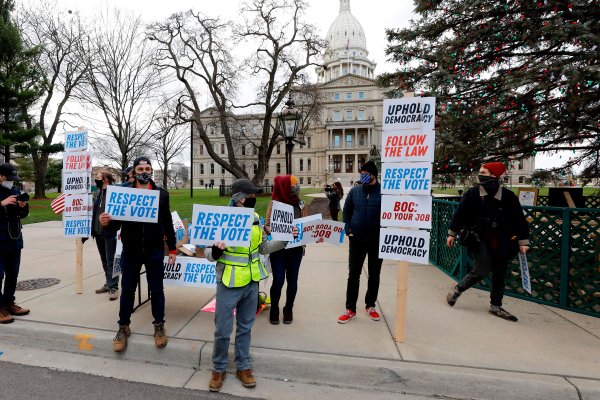 Trump’s Path to Change the Election Shrinks
Next Up: Editor's Pick