I Helped Negotiate the Iran Nuclear Deal. Here's How Joe Biden Could Revive It

Catherine Ashton (L), High Representative of the Union of Foreign Affairs and Security Policy for the European Union, and Iranian Foreign Minister Mohammad Javad Zarif attend the second day of the second round of P5+1 talks with Iran at the UN headquarters in Vienna, Austria on March 19, 2014
Dieter Nagl—AFP via Getty Images
Ideas
By Catherine Ashton

Baroness Catherine Ashton served as the E.U.’s first High Representative for Foreign Affairs and Security Policy, and led the P5+1 talks on Iran’s nuclear program. She is currently Global Europe Chair at the Woodrow Wilson Center in Washington D.C., and a member of the UK’s House of Lords.

A common expression we used during the negotiations over the Iran nuclear deal of 2015 was cautious optimism. It aptly sums up what will be felt in Brussels, Paris, London and Berlin on reports that President-elect Biden plans to re-join the Joint Comprehensive Plan of Action (JCPOA), as it is formally called.

It won’t be easy for a Biden administration to get back to the deal that President Donald Trump withdrew the U.S. from in 2018, despite huge amounts of good will from Europe. For starters, many members of Congress never warmed to the idea of an agreement with Iran. Even at the moment we reached an interim agreement in 2013, some wanted to put new sanctions on Iran. This would have killed the deal before it began. Nearly all the Republican candidates for President in 2016 said they would either toughen the JCPOA or scrap it altogether.

The Iranians were aware of the hostility; they raised their concerns during negotiations about whether a new administration would honor the agreement. The answer was there was no reason to believe an effective deal would be abandoned. Therein lies the problem. For some, “effective” did not include allowing Iran to have a civil programme. For others, it required Iran to change its behavior in the region. Yet others said the agreement or individual parts of it was too short-term: they wanted Iran tied for longer to a non-nuclear future.

Biden understands all this. He has an experienced team to plan what to do and can call on the expertise of many who were involved in negotiating the JCPOA. Still, it won’t be easy. Finding a way to get support in Congress will be challenging when, as things stand, the Democrats may not have control of the Senate. To put a revived JCPOA on firm foundations, he needs to be able to guarantee that if Iran sticks to its part of the bargain, the U.S. will too.

There is also a question of the other parties to the deal that make up the “P5 + 1” of Russia, China, Britain, France, Germany. The JCPOA belongs to all of them, and any discussions will need to include them. I had high hopes for this unique grouping — it seemed well placed to take on other challenges, and I was optimistic the deal would lead to other projects in which the P5+1 would work together to produce a safer world.

Those hopes have now been dashed, and not just by President Trump. Trust was never simple between everyone, and relationships have changed dramatically over the last four years. The U.K. has left the E.U. China’s influence has grown. Russia is more assertive. There will be resistance to further “asks” of Iran — especially if the U.S. is not offering more in return.

Yet the Iranians will be relieved to have survived the Trump administration’s “maximum pressure” campaign — and undoubtedly many will hope Biden’s election represents the opening of a new chapter. But there will be little appetite in Tehran to do more, if asked. Iran will expect a revived JCPOA to recognize what economic damage has been done over the past two years. While moderates in the country will be relieved and pleased that the agreement may return in some form, other Iranians will not. There will be hardline voices arguing that the Americans cannot be trusted.

So, what should the President-elect do? Here is a possible agenda:

1. Shore up the team

Get the European Union to convene the P5+1. Speak to the leaders of each country specifically on this and ask them to get their Foreign Ministers ready to meet with the new U.S. Secretary of State. Decide who is going to lead negotiations.

2. Position the JCPOA as the first deal, not the last.

The 2015 agreement was never meant to be the endpoint for negotiations. It addressed one huge, specific concern—Iran’s uranium enrichment program—and rather successfully. Until President Trump withdrew the U.S. from the deal, Iran kept to its side of the bargain. All of us were aware of the many other issues that needed tackling, from ballistic missile systems to its ambitions in the region, but this was the boulder in the doorway that had to be moved before we could walk through and solve the rest. Biden and his team need to paint the picture of how this can fit into a bigger regional strategy — taking into account the recently-agreed Abraham Accords between Israel and Arab nations.

3. Put the JCPOA on a stronger footing.

That will mean working with Congress, finding ways to give certainty to the agreement as long as everyone abides by it, and establishing longer-term objectives as a means to gain support. Returning to the JCPOA with only Presidential authority to keep it in place might work for the short term, but it is not a sustainable approach.

None of this will be easy, but all of it will be worthwhile. Reducing tension in the region, putting the U.S. back at the heart of resolving international issues and making us all a little safer: these are worthwhile objectives for a new year. 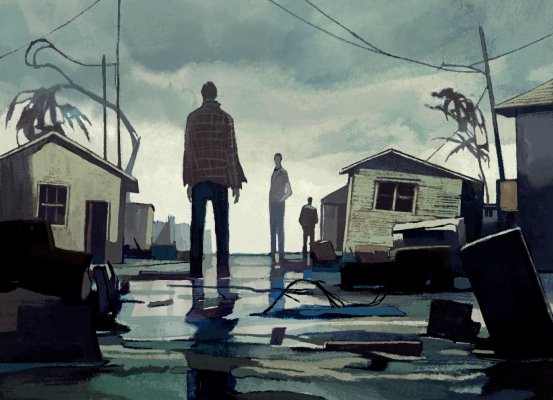 "When the Rain Stops": a Short Story by Bryan Washington
Next Up: Editor's Pick