Audrey Glover, Head Ambassador of the OSCE/ODIHR, opens the Office for Democratic Institutions and Human Rights Election Observation Mission in Turkey for the Early Presidential and Parliamentary Elections of 2018, during a press conference at the Sheraton Hotel in Ankara, Turkey, on 24 May 2018.
Diego Cupolo/NurPhoto via Getty Images
By Laignee Barron

Amid the gloomy post-election analysis about the damage caused to America’s national fabric, at least one international observer remains refreshingly optimistic.

Dame Audrey Glover, a prominent human rights lawyer and seasoned election monitor, is no stranger to many of the issues currently prompting a stream of dreary forecasts from within the beltway.

As the head of the U.S. observation mission for the Organization for Security and Co-operation in Europe (OSCE) in 2016, she witnessed Donald Trump’s improbable rise to the White House full and its contempt for democratic norms. Her team’s reports noted the misogynistic language on the campaign trial and Trump’s attempts to depict anything short of his resounding victory as “rigged.”

This year, she watched the race slowly unfold during a pandemic, a blizzard of misinformation and a whole lot of what she calls “vituperative language” deepening the partisan divide. But she’s relatively sanguine about it all.

“It is quite a serious election, this one… but I don’t think that just because of one election you can start saying, ‘Oh my goodness, you’re not going to have any more good elections.’ I don’t think that’s true,” she tells TIME by phone from the U.K. “I think the American people are pretty strong and tough and basically sensible. I’m quite sure they will be able to produce good elections in the future.”

Before the Nov. 3 vote Glover—who has more than 15 years’ experience monitoring elections around the world including hotly contested ones in Ukraine and Tunisia—was one of many observers raising concerns about voter confidence in the U.S. electoral process. As Trump ramped up his baseless attacks on the integrity of mail-in voting, and coronavirus surged, Glover wondered whether people could be prevented from casting their ballots. But instead, the record turnout allayed her fears.

“When you consider that in this election there was a greater turnout by voters than ever before, than in the whole history of U.S. voting and elections…and the fact that the president-elect won more votes than anyone had won before, I think if you look at that then there must be confidence in the electoral system,” she says.

This poll was very different from any Glover says she’s seen in the past. The virus posed an unprecedented challenge, causing last-minute changes to protect voters and poll workers and leaving some locations short-staffed as they tallied a daunting haul of mail ballots. Trump’s insistence on malfeasance, without evidence, only added another hurdle. And yet the administrators still managed, as Glover says, “to produce a very good election.” (The top election security official was fired by Trump this week after a statement called it “the most secure in American history.”)

Of course, the cycle is not over yet. Two months and a blitzkrieg of litigation remain as the Trump campaign puts up an increasingly unsuccessful fight to deny Joe Biden’s Jan. 20 inauguration. With judges around the country dismissing these lawsuits, the long-shot odds of this pathway are disappearing.

But the president’s refusal to initiate a peaceful transition, and attempt to subvert the results, could still have real lasting consequences—not least as his legions of supporters echo his claims of fraud.

“The United States has always prided itself on being democratic and now this is rather giving a bad example, not only for the people in the United States themselves, but for the rest of the world,” says Glover.

Still, “there are laws in the United States which deal with this situation and they need to be implemented,” she says.

That’s not to say Glover doesn’t see room for improvement. Her mission in 2016 laid out recommendations for bolstering the next poll in a 40-page report, many to do with voter rights for minorities and ex-felons. Few of them have been implemented.

The current OSCE U.S. election observation mission is due to release its final recommendations in January next year. The preliminary conclusions, released the day the polls closed, noted the polls “were competitive and well managed despite legal uncertainties and logistical challenges”

“I think people will need to look at this election very closely and analyze what has happened,” says Glover. Still, she believes “the voting population in the United States, particularly if it’s increased in any way, is strong enough to withstand any problems.” 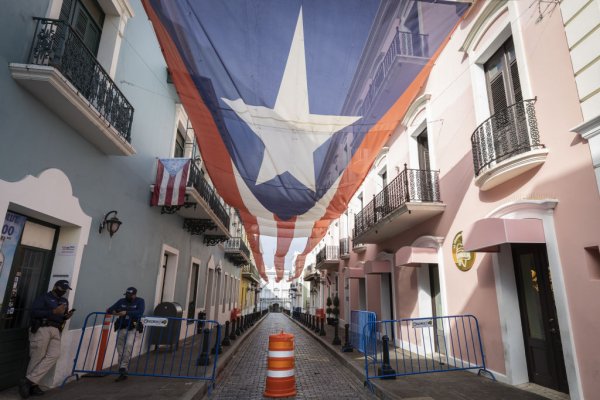 ‘We’re Literally Fighting For Our Lives.’ A New Political Movement Emerges Outside Puerto Rico’s Two-Party System
Next Up: Editor's Pick