The Puerto Rican flag is seen outside the Governor's residence as Puerto Ricans vote in the general election in San Juan, Puerto Rico on November 03, 2020.
Alejandro Granadillo—Anadolu Agency/Getty Images
By Mariah Espada

Alexandra Marie Figueroa-Miranda spent days counting ballots after the contentious Nov. 3 election. But, as a resident of Puerto Rico, she wasn’t counting any votes for Donald Trump or Joe Biden. She and the millions of other Americans living in the commonwealth can’t vote in U.S. presidential elections, despite their contributions to federal taxes and status as U.S. citizens.

The question of Puerto Rico’s colonial status and how best Puerto Ricans can exercise their rights as American citizens has been at the heart of every election on the island in recent memory, including this one. For the third time in 53 years, Puerto Ricans voted in favor of becoming a U.S. state in a non-binding referendum on the ballot, and elected a new governor from the island’s main pro-statehood party.

But, for the first time, a constellation of new parties that attracted large numbers of younger voters could signal a new direction for the territory entirely.

“We’re literally fighting for our lives,” says Figueroa-Miranda, founder of La Clara, a political youth advocacy group. “These elections have been so important because for the last four years, we’ve been improvising a country.”

For decades, Puerto Ricans have faced a series of competing economic and political crises. But in the last four years, things have gotten worse. Student strikes over austerity measures, the devastation of back-to-back Hurricanes Irma and Maria, destructive earthquakes, a climbing fiscal debt and the local impact of climate change has brought the island to a crossroads.

Many Puerto Ricans blame the territory’s two-party political system for the current state of affairs. For the last fifty years, control of the island has swung between the two dominant parties that represent competing philosophies on the future of the island: the New Progressive Party (NPP), which advocates for full U.S. statehood, and the Popular Democratic Party (PPD), which favors retaining the current commonwealth status.

Now several smaller parties are gaining popularity with younger Puerto Ricans who have watched multiple bungled federal responses to disasters and aren’t necessarily interested in becoming the 51st state. They’re touting alternate visions for the island that could bring greater autonomy and improve economic conditions, such as seeking full independence from the U.S., or becoming a sovereign nation in “free association” with the U.S., like its relationship with the Marshall Islands.

“For the newer generations, all of their life what they have seen is Puerto Rico in an economic recession,” says Edil Sepúlveda Carl, a lawyer based in the Washington D.C. area who engages with the federal government on issues of Puerto Rican self-determination.“ They have seen the very awful response from the federal government after Hurricane Irma, Hurricane Maria and the earthquakes…. We’ve had a feeling that there’s some kind of transition happening in Puerto Rico, especially with young people being more anti-statehood.”

While 52% of the island voted in favor of statehood on Nov. 3, turnout was relatively low, with only about 53% of eligible voters participating. The NPP, which spent millions to include the issue on the ballot after Attorney General William Barr refused to appropriate federal funds for the plebiscite, heralded the outcome as a victory for the statehood cause. But many see the referendum simply as a political tool for the party to get supporters to the polls, and question whether the results reflect what most Puerto Ricans actually want to see happen.

“Irrespective of your positions on statehood for Puerto Rico, to say “A clear majority of Puerto Ricans support statehood” is factually inaccurate,’” tweeted Nuyorican researcher and filmmaker Andrew J. Padilla days after the vote. “The island needs to come together and create a process and determination that can really garner a true consensus of the population,” he later told TIME.

The election also delivered a slim win to the NPP, which has held the Governor’s seat since 2016. Critics have accused the party of mishandling federal emergency aid, and the party’s members have regularly faced corruption probes. Last year, hundreds of thousands of Puerto Ricans took to the streets to demand the resignation of the scandal-plagued NPP governor at the time, Ricardo Rosselló, who eventually stepped down. This month, the NPP’s Pedro Pierluisi won the gubernatorial race with 32.93% of the vote, the lowest support of any winning governor on the island, while the PPD candidate trailed with just 17,000 fewer votes.

Pierlusi’s small margin of victory is indicative of the growing support for parties outside of the traditional system, including the Puerto Rican Independence Party (PIP), and the newly registered anti-colonial Citizen’s Victory Movement (CVM) and anti-corruption Project Dignity parties. More voters came out for the three together than for the NPP and PPD, accounting for nearly 35% of the vote.

The new direction of the voters from these parties were also able to historically gain six seats in the House and Senate of the Legislative Assembly of Puerto Rico. Now the PPD, which comprises the majority of the legislature, will likely have to work in tandem with some minority representatives moving forward.

Those who went to the polls ready to say goodbye to the NPP are disappointed by the outcome. In the eleven days since the party won re-election, an NPP lawmaker has already been arrested by FBI officials on corruption charges. Thousands of uncounted votes from various precincts were found days after the election, according to the New York Times, with some alleging the ruling party is involved. An NPP representative on their election council has since denied these claims, asserting that the party is prioritizing a fair election, the NYT reports.

Figueroa-Miranda of La Clara also blames the NPP for that and other election irregularities. Like other young Puerto Ricans, the 27-year-old has grown wary of the territory’s political system and isn’t confident in the official results. “I’m scared that the numbers don’t represent what actually happened here on Nov. 3,” she says.

As Puerto Ricans combat the island’s extreme financial troubles, with millions going without power or running water for months at-a-time, many have tried relocating to the mainland U.S. The island’s population has been steadily declining for the last decade, and hit a new low after Hurricanes Maria and Irma in 2018.

For Sepúlveda, the lawyer in Washington, moving to the U.S. after going to law school on the island not only offered a better future, but the chance to advocate for Puerto Rico in America. In 2017, in the wake of Hurricane Maria, Sepúlveda co-founded Boricuas Unidos en la Diáspora, a network of Puerto Rican professionals that have been lobbying Congress to implement a serious self determination and decolonization process.

Puerto Rico’s status has been a disputed topic in Washington for several administrations. In 2016, Congress and former President Barack Obama passed a bill known as PROMESA, a plan set to tackle the island’s looming debt crisis through a financial committee that oversees the island’s budget, referenced colloquially in Puerto Rico as “la junta.” Many on the island have been critical of the oversight, saying it fails to address the unjust conditions of their day-to-day life.

During Trump’s term, he called the U.S. territory “one of the most corrupt places on Earth” and made it clear statehood for Puerto Rico would be an “absolute no” for him if the current mayor of San Juan, Carmen Yulín Cruz, remains in office. He and Cruz began feuding after she was critical of his handling of Hurricane Maria, including his infamous tossing of paper towels into a crowd of hurricane survivors in 2017.

Last month, former interim governor Wanda Vázquez of the NPP endorsed Trump for re-election, a decision that could have potentially helped the incumbent gain momentum with the Latino vote in Florida, where more than one million Puerto Ricans live. Now as President-elect Joe Biden takes office, he has signaled he’d be supporting statehood for Puerto Rico and has proposed a comprehensive recovery plan for his administration to deal with the island’s issues.

Sepúlveda’s group backed the Puerto Rico Self-Determination Act that Rep. Nydia Velázquez and Rep. Alexandria Ocasio-Cortez proposed in August, which would start negotiations between Congress and a body of representatives elected by Puerto Ricans to come to a decision about the future of the island’s status.

The bill, which was not endorsed by the pro-statehood NPP, remains in limbo as the Committee on Natural Resources has yet to pass it to the House floor. Though they did not publicly say why they didn’t back the bill, Sepúlveda and others suggest it may be because they want to remain in control of the statehood process.

Democratic Rep. Charlie Crist and Rep. Darren Soto of Florida, a state with a rising population of Puerto Ricans, have said they will introduce more bipartisan resolutions to the floor in support of the Nov. 3 referendum’s result. But with no clear sign that Congress will be weighing in on the many issues that Puerto Ricans face anytime soon, many feel like the future of the island is in their own hands.

“You can not wait for a government to help you,” says Sepúlveda, adding, “Solo el pueblo salva al pueblo.” Only the people save the people. 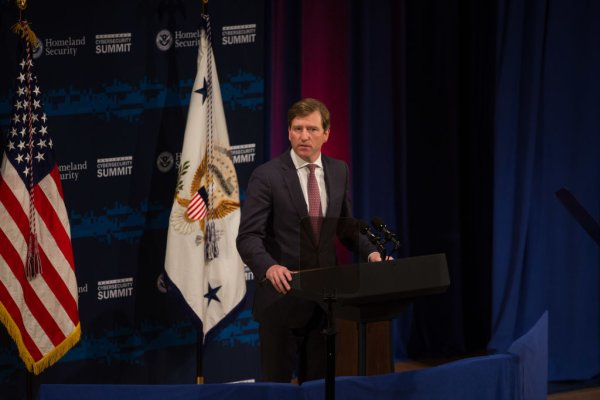 Trump's Own Government Debunks Fraud Claims
Next Up: Editor's Pick