In a bizarre, unsettling, and oftentimes downright frightening year, video games became a port of refuge for many—be they longtime gamers, old-school veterans picking the controller back up after a break, or first-timers looking for a novel way to safely have fun or connect with friends during pandemic lockdowns. It’s a small blessing, then, that it was also a banner year for excellent games to play.

Nostalgia is big business right now, but reworking old joy rarely delivers that original thrill. Enter Tony Hawk’s Pro Skater 1 + 2. Against all odds, this remake recaptures the magic of these early aughts skateboarding games while refreshing them for modern consoles and audiences. Playing these games unlocks long-forgotten muscle memory, the hunger for high scores and the itch to jump on a skateboard—not to mention comfort during a difficult year. —Peter Allen Clark

Available on PlayStation, Xbox and PC

What happens when you combine the minigame mania of Mario Party with the battle royale, lose-and-you’re-out pressure of Fortnite? Fall Guys, that’s what. Its delightfully simple multiplayer mayhem was a welcome reprieve during our pandemic summer, and the fact that players often need to cooperate to secure individual victory belies a deeper message than its cartoonish stylings might suggest. Moreover, like Animal Crossing, it’s a welcome repudiation of the idea that games need to be hard to be enjoyable—they need only be fun. —Alex Fitzpatrick

Available on PlayStation and PC

Microsoft’s Flight Simulator series has been the definitive virtual piloting experience for nearly 40 years, inspiring many players to pursue real-world flight training while offering a taste of the skies to countless more. The latest entrant in the series continues that proud tradition, combining true-to-life flight physics, downright gorgeous graphics and the most realistic facsimile of planet Earth to ever grace a video game for a must-play experience. Challenge yourself to some of the hardest commercial jet takeoffs or landings the world has to offer, or putt-putt over your hometown in a slow-moving Cub, marveling at the view—the choice is yours. —Alex Fitzpatrick

Available on PC; an Xbox version is in development

A free add-on to 2019’s Call of Duty: Modern Warfare, Warzone is a Fortnite-style battle royale shooter, with just enough original ideas to feel fresh. Most Fortnite clones have come up short, but Warzone’s systems, strategies and progressions provided dozens and dozens of hours of distraction as we adjusted to spending more time at home during lockdown. And developer Infinity Ward has continued to support the experience with robust seasons, map changes and new ways to play this intense, addictive game. —Peter Allen Clark

Available on PlayStation, Xbox and PC

6. Ori and the Will of the Wisps

The much-anticipated sequel to Moon Studios’ Ori and the Blind Forest does exactly what a sequel should, building on its predecessor’s foundation to create a more complex, more colorful and bigger world. In the game’s prelude, Ori and a host of other adorable characters adopt and raise a baby owl. But tragedy strikes when Ori and the baby bird are separated. The player then traverses a gorgeously-rendered landscape and solves a series of wicked little puzzles in a heart-wrenching reunification quest. The sheer scale of the game compared to its predecessor means some details get lost in the mix, like the player easily missing some important skills. But the challenges demand creativity and the backdrop inspires awe. —Eliana Dockterman

The unofficial game of springtime pandemic lockdowns, Animal Crossing: New Horizons is the latest entry in Nintendo’s long-running life simulator franchise. This time, you’re dropped on an island where you (and a few anthropomorphic animal residents) set out to construct a community—and pay off your debt to the cheeseparing capitalist raccoon-dog that brought you there. When you’re not building items for your home, you can enjoy New Horizons’ huge community of players partying, playing the turnip-powered “stalk market,” and even hosting talk shows all on their own custom-made virtual islands. —Patrick Lucas Austin

Deception is the name of the game in Among Us, a kind of digital Clue in which you’re tasked with “sussing” out the impostor on your starship. Some players, called “Crewmates,” are assigned to minigame-style repair jobs around the ship, while the “Impostor” sets out to quietly disrupt and kill the Crewmates. Suspicious of someone? Call a meeting to discuss who might be an Impostor, then vote to throw them into the cold vacuum of space—just be careful, because you could be wrong. Among Us’ childish, hand-drawn looks and PG-rated violence evoke early web games, and its spike in popularity among younger gamers has led high-profile figures like U.S. congresswoman Alexandria Ocasio-Cortez to use the game as a platform to meet voters where they’re at. Part social deduction, part mob rule, Among Us may have been released back in 2018, but it’s no wonder why it’s found widespread popularity this year. —Patrick Lucas Austin

The post-apocalyptic The Last of Us Part II takes a lot of big swings that will surprise, frustrate and even enrage many players—but they are thought-provoking risks. The sequel follows Ellie, all grown up and still immune to the virus that has transformed much of humanity into zombies, as she struggles with the consequences of a morally dubious decision made by her father figure Joel in the first game. Ellie is often on her own, which is a shame since creator Naughty Dog has historically excelled at building relationships through banter in both The Last of Us and the Uncharted series. But her loneliness serves a greater story: as Ellie loses human connection and becomes obsessed with vengeance, her enemies simultaneously evolve into more human figures. With sympathies divided, the player is faced with a series of devastating moral quandaries. The end will sit with you for months, if not years, to come. —Eliana Dockterman

When you think of Spider-Man, you might be thinking of a nerdy white guy called Peter Parker. But there’s a second webslinger in New York, and this time he’s grabbing the mic and taking center stage. Spider-Man: Miles Morales expands on the 2018 hit Spider-Man, putting you in the shoes of the titular Black-Puerto Rican teen after he moves from Brooklyn to Harlem, protecting the city while his mentor is on vacation. The game captures the feeling of zipping from building to building and fighting criminals in a wintery New York as Morales navigates the heartbreak of an evolving friendship, his relationship with his mother, and his new mandate to keep Harlem (and the rest of the city) safe from evildoers. —Patrick Lucas Austin

So-called “Rogue-like” games, which focus on difficulty, replayability and repeated deaths, have been in vogue for the past decade, but Hades marks the sub-genre’s highest peak yet. In this spectacular run-based game, players take on the role of Hades’ son Zagreus as he attempts to escape the Greek underworld, battling notable heroes and receiving support from the whole of the Pantheon. The art is stellar, the varied combat is delightful and the progression systems are inspired. Hades reinvents how a story can unfold in a game meant to be played over and over again. —Peter Allen Clark

The original version of this story misstated the availability of Hades. It is available on Nintendo Switch, MacOS, and PC, not PlayStation and Xbox. 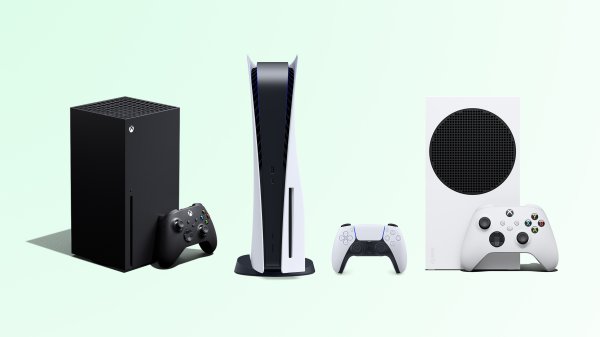 Should You Get a PlayStation 5, Xbox Series X, or Xbox Series S? Here's How to Decide
Next Up: Editor's Pick