The best toys of 2020 perfectly encapsulate this year’s events—from Monopoly House Divided, a state-of-the-nation take on the classic board game, to Playmobil’s Large Hospital play set, which introduces kids to what goes on inside a hospital. Other top toys serve as an escape from the chaos of 2020—think drawing with chocolate, creating illuminated woodland creatures and training a quirky robotic balloon dog to do tricks. Here, the editors of TIME for Kids round up the best of this year’s toys.

If your kids have been begging you to get a puppy throughout the pandemic, Squeakee the Balloon Dog, by Moose Toys, might be the next best thing. He sits, stands, relieves himself and responds to touch and voice commands. Train him to do tricks using his squeaker toy; pop him with his plastic pin, and he will deflate to the ground. But have no fear: Squeakee can be reinflated with his plastic pump. He may not be an actual dog —or even a balloon dog—but he acts like both. (Ages 5+)

FROM LEFT: THE LEGO GROUP; HASBRO

These toys will have kids playing politics well after the 2020 election. Hasbro’s Monopoly House Divided is based on the traditional version of the game, but instead of building hotels, the object is to build campaign headquarters and win states. Players wrangle for votes while collecting rent to fund their race towards the ultimate prize: the White House. For a less competitive course to the seat of power, there’s Lego Architecture: The White House. With this building-block set, families can recreate the historic home of the U.S. president, complete with gardens and a fountain. (Monopoly House Divided, ages 8+; Lego Architecture: The White House, ages 18+)

Creatto Light Up Crafting Kit comes with punch-out plastic tiles, connectors, LED lights and instructions for making a variety of whimsical creatures. It’s a 3D puzzle with no additional pieces or hardware needed. With Magical Moose & Forest Friends, kids can follow along with the manual to create a shark, octopus, seagull or fish—or create something of their own. Once the pieces are assembled, LED lights can be strung through the puzzle to create an illuminated creature, perfect for brightening up a kid’s bedroom. Thames & Kosmos offers multiple Creatto sets, including Shimmer Shark & Ocean Pals and Sparkle Unicorn & Friends. (Magical Moose & Forest Friends, ages 6+; Shimmer Shark & Ocean Pals, ages 9+; Sparkle Unicorn & Friends, ages 9+)

Kids can flex their creative muscles with these sunny open-ended play sets. Lego® Classic Bricks Bricks Plates includes more than 1,500 Lego pieces in a variety of colors and shapes, plus four square bases that hold bricks at any angle—even upside down. For sensory play, Horizon Group USA’s Rainbow Mixy Squish Deluxe Pack features air-dry clay in 12 bright colors and tactile mixers like confetti and foam balls. When kids have had their fill, leaving the clay out for 24 to 48 hours will transform their creations into soft sculptures. (Lego® Classic Bricks Bricks Plates, ages 4+; Rainbow Mixy Squish Deluxe Pack, ages 3+)

Need an extra hand? Try a hydraulic one that can help with everyday tasks. Mega Cyborg Hand, by Thames & Kosmos, comes with more than 200 pieces and a step-by-step assembly manual for building the robotic hand—while learning about hydraulics and pneumatics along the way. The toy simulates the movements of a human hand, with no electricity required. Once assembled, it slips on like a glove. (Ages 7+)

Back to the Classics

This year marks the 60th anniversary of Etch A Sketch, and next year is the 50th anniversary of Uno. Celebrate these milestones with two new twists on the timeless, kid-approved classics. Spin Master’s Etch A Sketch Revolution is built for sketching perfect circles on its shake-to-erase screen. Mattel’s Uno Showdown enlivens the popular matching card game by requiring quick reflexes. The new iteration has become even more interactive: Playing a Showdown wild card means challenging another player to a face-off. The first person to push the paddle wins the round. (Etch A Sketch Revolution, ages 5+; Uno Showdown, ages 7+)

These mesmerizing low-tech kits combine the fundamentals of STEM with the arts. The Smartivity Music Machine is a DIY creativity kit that allows kids to build a self-playing xylophone machine without glue or tools. Once the instrument is assembled, kids can crank out their own songs. The Smartivity Kaleidoscope is another wooden construction kit—focusing on patterns and colors. When the kaleidoscope is completed, it can be filled with some of the 60 included beads or other small items from around the house. (Smartivity Music Machine, ages 8+; Smartivity Kaleidoscope, ages 8+)

Many would agree that the real star of The Mandalorian is actually the Child. The creature—also known as Baby Yoda for its resemblance to the classic Star Wars character—could be waddling its way into your home. Hasbro’s Star Wars: The Child Animatronic Edition toy is beyond cuddly; it blinks and makes adorable sounds. Mattel’s The Child: Real Moves Plush goes even further with its remote-control and ability to move across the floor. For building-enthusiasts, Lego® Star Wars™: The Child might be the best choice. Sit down with the family and assemble the cutest kid in the galaxy. (The Child: Real Moves Plush, ages 3+; Star Wars: The Child Animatronic Edition, ages 4+; Lego Star Wars: The Child, ages 10+)

Family game night just got a lot more active. Hands Full, by WowWee, is best described as a Twister-meets–Bop It game, consisting of tying yourself up in knots and responding to commands. Grab, jump, high-five, twist, and more—but don’t mess up or the game is over. Vango’s The #UpsideDownChallenge Game will turn your world upside down—literally. Sure, you know how to high-five a friend, draw a tree and pour water from one cup to another. But what happens when you try to complete these tasks wearing upside-down goggles? (Hands Full, ages 8+; The #UpsideDownChallenge Game, 8+)

Playmobil’s Large Hospital brings toy doctor kits into the modern era. This two-story medical center has rolling hospital beds, an elevator for transporting patients and an operating room with an illuminated wall monitor. It comes with mini medical devices, including a stethoscope and reflex hammer. The waiting room is complete with magazines and an espresso machine. Large Hospital is a great toy to introduce kids to health-care professions—particularly during these times. It’s also useful for helping children work through anxiety they might have about visiting a hospital or doctor. (Ages 3+)

Enter the world of delicious and imaginative crafting. With Chocolate Pen, by Skyrocket, the pigment of choice is melted confectioner’s chocolate in a variety of colors. Kids can write tasty messages or melt chocolate into molds to create rainbows, animals and more. With Super Duper Bubble Gum Lab, by Thames & Kosmos, kids can create their own chewing gum in watermelon, orange and classic bubble gum flavors. Once the gum is concocted, it’s not just tasty to chew; it can also be used in a variety of science experiments, which are included in the kit’s instructional manual. (Chocolate Pen, ages 6+; Super Duper Bubble Gum Lab, ages 6+)

Ready to race to the finish line? PlayMonster’s Drone Home is the first-ever game featuring a real flying drone. Players launch aliens in the drone to help them escape. The first player to send home all of his or her aliens wins. Power Treads, by WowWee, is a speedy vehicle that can move on nearly all surfaces, perfect for the home. It comes with a modular track set that can be used to create different courses, built around obstacles and more. (Drone Home, ages 8+; Power Treads, ages 5+) 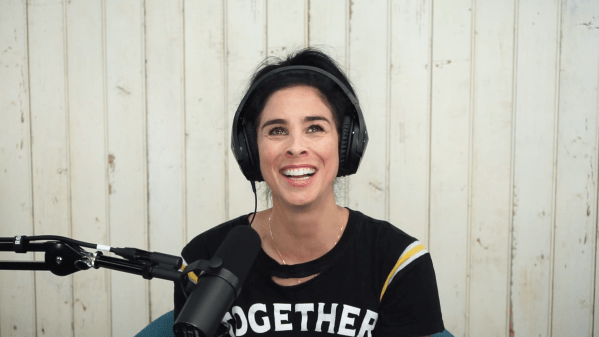 It's Not Just...Sarah Silverman on Changing Hearts Before Minds, It's Also the Science of Uncertainty
Next Up: Editor's Pick