After seven years, millions of consoles sold, and a generation of users clamoring for an upgraded graphical experience, Sony and Microsoft are finally releasing the next version of their iconic Xbox and PlayStation consoles.

With both the PlayStation 5 and Xbox Series X (and Series S) going on sale this week, you might be wondering which one to pick. Here’s what sets each of them apart from the others.

While the PlayStation 5 and Xbox Series X have 4K capability, the diminutive Xbox Series S is designed to bring next-gen gaming to your current, non-4K setup—consider it the entry-level console for this generation’s gaming needs.

The Xbox Series X is great if you only have a 1080p TV, but can also display games at a slightly higher 1440p resolution should you be using something like a game-friendly computer monitor. If you’re playing on a 4K TV, the Series S will “upscale” your content, letting you play games in what amounts to a simulation of real 4K resolution (some games, like Ori and the Will of the Wisp, will be displayed in native 4K)—but don’t expect it to look particularly extravagant.

Even if the Xbox Series S can’t do true 4K gaming, it does stream movies in native 4K, so you’ll still be able to watch high-def flicks. But be warned: the lack of a disc drive means you won’t be playing any Ultra HD Blu-Ray movies as you could with the Xbox Series X, nor will you be able to purchase physical games. That also means you may be hamstrung by its smaller 512GB internal storage, though that’s expandable with a proprietary 1TB storage option (like a camera memory card, but for your Xbox).

Get the Xbox Series S if: You don’t care about being on the cutting edge of gaming, and just want a console that’ll get you access to hundreds of games and 4K movies without breaking the bank; it’s also a great lower-cost option for parents shopping for their young kids.

The Xbox Series X: Going hard on the graphics

Where the Xbox Series S brings next-gen gaming to lower-resolution screens, the Xbox Series X is built for gamers who want to see every pixel pop on their 4K display and purchase games with little hassle, be they physical or digital versions.

The Xbox Series X plays games at their native 4K resolution, can run certain titles at 120 frames per second, and includes an Ultra HD Blu-Ray drive, which the cheaper Series S lacks. Its 1TB of storage (expandable like the Series S) lets you pack more games in your console, while the disc drive makes it easier to delete and re-install games at will.

Both the Xbox Series S and Series X work with Microsoft’s subscription service, Game Pass, which offers access to hundreds of Xbox games past and present for $9 per month, playable either on your console or your PC—think of it as Netflix for games. You can play select Xbox and Xbox 360 games using Game Pass, as well as current-day Xbox Series games like Destiny and Gears 5. For $15 per month, there’s Game Pass Ultimate, which nets you the same number of games, but also lets you play or stream them on your Android smartphone, among other perks.

To get more people in the Xbox ecosystem without requiring they drop hundreds of bucks up front, Microsoft has also created the Xbox All Access subscription, which bundles either an Xbox Series S or Series X console with Game Pass Ultimate for $24.99 (Series S) or $34.99 per month (Series X) for two years.

Get the Xbox Series X if: You want a powerful console that can fully take advantage of your 4K TV and home theater setup, and an Ultra HD Blu-Ray player for your growing library of physical media. Paired with a service like Game Pass Ultimate, the Xbox Series X is the console for older gamers with fond memories of their first Xbox.

Available in two versions, a $399 digital-only version and a $499 model with a built-in Ultra HD Blu-Ray drive, Sony’s PlayStation 5 carries on the legacy of the PlayStation 4 with a focus on exclusivity—a strategy that helped Sony sell twice as many consoles as rival Microsoft. The company is betting you’ll love titles like Spider-Man: Miles Morales, already available, and upcoming exclusives like the remastered Demon Souls and Rachet and Clank: Rift Apart, both set to hit the PS5 within the next year. All PS5 games are presented in 4K resolution, and load quickly thanks to the internal 1TB SSD (expandable with a Sony-approved SSD expansion card).

There’s also the new DualSense controller, which features a familiar layout for PlayStation owners while adding new features like pressure-sensitive triggers able to recreate the feeling of, for example, shooting an arrow or playing with a zipper. Titles like Astro’s Playroom and Call of Duty: Black Ops Cold War take advantage of the haptic features, but it remains to be seen whether developers making games for multiple consoles will spend time and resources utilizing features available on just one.

While there aren’t many games available at launch, the PlayStation 5 is backwards-compatible with your PS4 library. There’s also Sony’s PlayStation Now game streaming service, letting you play hundreds of PS2, PS3, and PS4 games on your PlayStation 5 or PC for $10 per month.

Get the PlayStation 5 if: You’re already invested in Sony’s library of exclusive games on the PlayStation 4, and want to play games with a more advanced controller that immerses you in the action. Also, if you don’t mind displaying the console prominently, the PlayStation 5 might serve as an artistic talking point when you’re not playing with it. 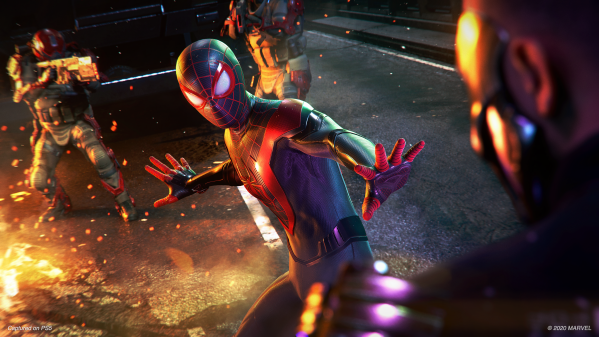