Georgia’s Runoffs Are About So Much More Than Senate Power

The balance of power in the U.S. Senate now hinges on whether Republicans can hold onto two seats in Georgia that are heading toward a January runoff. But the story is so much bigger.

Georgia Democrats have been shut out of the Senate for the last 15 years as the unofficial capital of the New South has faced a shift to the right that has come at the expense of Black voters’ power. Now that seems to be changing, partly thanks to Democratic rock star Stacey Abrams, who has marshaled the power of Black voters, and because the Democratic Party as a whole got serious about a state with shifting demographics and moderate voters.

As of today, Raphael Warnock, one of the Democratic contenders in the state’s two Senate races, is ahead of his GOP opponent, and Democrat Jon Ossoff is trailing. But because neither race saw a candidate top 50% of the vote in crowded races, they now head to a Jan. 5 runoff that — if everything else holds — will decide whether Democrats will control the Upper Chamber for the first time since the 2014 elections tipped the power to the GOP. If both Georgia Democrats win, Vice President-elect Kamala Harris will break the Senate’s 50-50 tie on votes and Democrats will have control. If one or neither does, Republicans will keep their control, and their ability to jam up President-elect Joe Biden’s agenda for the next two years.

That means whoever wields power in Biden’s Washington come Jan. 20 will pivot on whether Georgia Republicans or Georgia Democrats can better sustain their energy for the next 55 days. The stakes are high, and the price tag on each side, according to strategists on both sides, could reach a half-billion dollars or more. Democrats will have the White House — despite Trump’s insistence otherwise — and the U.S. House. And while the Senate Democrats’ majority would be narrow and susceptible to Republican filibuster and Democratic Sen. Joe Manchin’s centrist whims, it would still pose a serious threat to Republicans. GOP donors are opening their pocketbooks with abandon after seeing last week’s elections give them inroads in the House and one Governor’s Mansion in Montana, but not the promised White House. Democratic donors are still not exhausted.

It is against this backdrop that we catch up with Senate Majority Leader Mitch McConnell. The canny Kentucky Republican is fighting to hold onto the gavels in the Senate. McConnell alone controls the Senate floor and he has shown since his elevation to that job in 2015 that he’s a master of the Upper Chamber’s arcane rules and procedures to muster his conservative agenda. In order to hold onto that power, he needs to keep his majority — which means he needs his incumbents in Georgia, Sens. David Purdue and Kelly Loeffler, to eke out their victories. In raw numbers of voters, that means McConnell needs the almost 2.5 million Georgians who voted for Trump to show up again in two months with the same level of enthusiasm.

Biden appears to be leading Trump in Georgia, although The Associated Press hasn’t yet called the race. There’s no rush, really. Biden has secured enough electoral votes to be named President-elect, and Georgia cannot countermand that math whatever direction it goes. Still, Trump’s campaign is busy fighting. It may be less about getting Trump to hold power — although he very much would like to do so — as it is to keep voter intensity from dropping off. On Wednesday, Georgia Secretary of State Brad Raffensperger announced the presidential results would get a hand recount, further adding to the reality show-style drama the President thrives on.

Georgia’s politics are a curious thing. Biden and Trump ran about even among the almost 5 million votes cast last week. But down-ballot, there were drop-offs in the Senate race, albeit a relatively small 47,000 total ballots that weighed on the presidential race but skipped past the race between Purdue and Ossoff. As of writing, Perdue, a first-term Senator, was ahead by fewer than 87,000 votes.

The second Senate race on the ticket was more complicated. Loeffler, the GOP incumbent, was appointed to her seat by Republican Governor Brian Kemp after Sen. Johnny Isakson left the Senate for health reasons at the end of 2019. She’s running against the Democrats’ Warnock to fulfill the rest of Isakson’s term, but almost 308,000 Trump voters skipped right past Loeffler and the other Republican on the ballot in this special election. In other words, Trump voters weren’t interested in this race and sat it out.

Which brings us the outsized impact these Georgia races are having on U.S. politics. To stay in control of the Senate, McConnell needs those Trump voters to stick with Purdue and fall in line behind Loeffler, a businesswoman who owns Atlanta’s WNBA team and is the richest member of the Senate. He needs Trump to continue to campaign in the state, and so he cannot risk standing up to the President, who has refused to acknowledge his electoral loss. Most other Republicans with an interest in keeping power have done the same, while others like Sen. Mitt Romney and former President George W. Bush who are in their last acts in politics have congratulated President-elect Biden.

McConnell knows the math. History has shown runoffs never attract the same intensity as the first round of voting. In 2008, as Barack Obama won re-election and lost Georgia, almost 3.8 million votes were cast in the first round of voting. When a December runoff arrived, 2,1 million voters showed up, a 45% drop-off. But among Republicans, the drop-off was just 41% to Democrats’ 63%. Republicans came back while Democrats did not, according to The D.C. Brief’s analysis.

So McConnell’s still got a chance. There have been seven statewide runoffs in Georgia since 1988; Democrats have won just one. An engaged Trump may keep Georgia Republicans on the field. So McConnell may have good reason to believe he doesn’t have to get on the phone to congratulate President-elect Biden — yet. If McConnell can simultaneously keep Trump’s supporters in the mix and preserve his Senate majority, he can make nice with Biden when they reunite as two of the most powerful men in Washington next year. 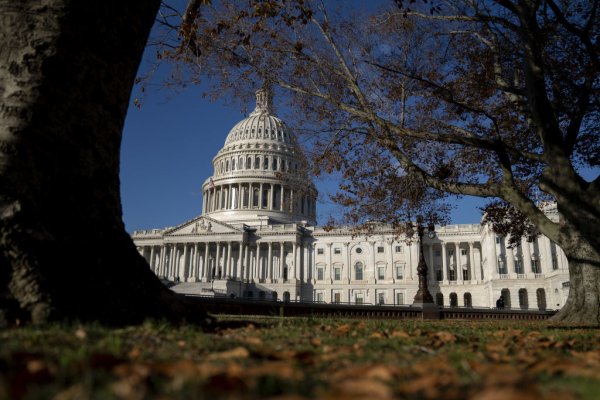 GOP State Wins Are a Problem for Congressional Dems
Next Up: Editor's Pick