The Good, the Bad and the Thirsty: How News Anchors Became the Breakout Stars of Election Week 2020

As the results of the 2020 presidential election slowly rolled in over the course of election week, Americans seemed to be glued to cable news like never before. And now, with the benefit of hindsight and the declaration of a winner, it seems like the right time to take stock of how news anchors shaped one of the longest weeks in a very long year.

Ahead of President-elect Joe Biden winning the election on Saturday, the main reason for many people’s network news obsession was, of course, to get minute-by-minute updates on the race between Biden and President Donald Trump. But there was an additional draw that came as a surprise to some viewers: the reassuring presence of some of the election news anchors themselves.

From CNN’s John King to MSNBC’s Steve Kornacki, news anchors spent the week tirelessly breaking down votes in battleground states on huge touchscreens. As multiple states remained uncalled for days on end, many anchors became the surprise stars, both famously and infamously, of the election.

On social media sites like Twitter and TikTok, memes, criticism and even so-called “thirst” posts about these anchors’ commitment to delivering viewers the most up-to-date election information began inundating people’s feeds. And while cable news favorites like CNN’s Anderson Cooper and MSNBC’s Rachel Maddow had their moments, it was the “chartthrobs” like King and Kornacki who kept viewers coming back for more data-driven analysis of the electoral map.

But the week wasn’t a home run for every cable network host. Over on Fox News, Fox Business anchor Maria Bartiromo’s attempts to elevate baseless claims about voter fraud being pushed by the Trump campaign were at odds with comments made by some of her own colleagues. And Cooper received pushback for a comment he made about Trump following the President’s Nov. 5 TV appearance.

Through it all, from comedy to controversy, America kept watching. News media was the one place that showed most people where the race stood, day or night. Even if anchors had no new results, for five days viewers could see their own anxieties and impatience reflected on the people having to fill time on news programs. And during this pandemic, when in-person socialization is rare, the news anchors, combined with the internet, became America’s pop-up watch party for election week 2020.

King and Kornacki get meme’d

Seeing the votes laid out by the numbers in every state, city and county across the country seemed to be a comfort to some viewers tuning in to watch election news —which is why data experts John King and Steve Kornacki became the anchors of the hour (er, week). As the tide turned in favor of Biden over the course of several days, King and Kornacki were there to explain not only why, but also what was likely to be the ultimate result in a number of key swing states.

And so the people of the internet did what they usually do: turned to comedy to process their newfound reverence for the pair.

No rest for data experts

Both King and Kornacki were near constant features of their respective network’s election coverage, prompting people to wonder if they ever took breaks, let alone slept. On Thursday, King told the Los Angeles Times in a statement that he had slept 6.5 hours since Tuesday. “I’ve been on air 12-14 hours both Tuesday and Wednesday,” he said. “Tuesday night I got 2.5 hours sleep; Wednesday night 4. Happy to do as much as I can.”

Debate over whether or not the clip was real even inspired King himself to weigh in on the fake. In response to one Twitter user’s request for the CNN anchor to verify the video, King tweeted that it had been created by “some clown taking time away from lying about something else apparently because they don’t like math.”

Meanwhile, over on MSNBC, Kornacki was awake for 45 hours straight, from 5 a.m. Tuesday morning until 2 a.m. Thursday morning. During that time period, he reportedly didn’t even take his first break until noon on Wednesday, when his colleague Ali Velshi stepped in. “We have removed him forcibly from the building,” Velshi told anchor Ari Melber. “He’s in a room with pillows, blankets and warm milk.”

As the week wore on, some people’s admiration for cable news’ election map men escalated into “map daddy” and “chartthrob” territory. Social media was thirsty.

Kornacki even caught the eye of several celebrities, with former Saturday Night Live cast member Leslie Jones leading the charge, growing increasingly infatuated with running Twitter commentary. “This is how I like my reporters to look: disheveled and concerned,” she said in one of her first videos. “I love this dude.”

Now that the dust has (mostly) settled, Kornacki told TIME that he’s still wrapping his head around becoming an internet “hearththrob.”

“It took a couple days to realize that stuff like that was happening,” he said. “I did not know, I didn’t recognize anything about it election night or probably the day after. But I started getting family or friends sending me things. There are worse fates in life than that—but some of it made me a little squeamish, but it was all coming from a good place.”

And last Saturday, Kornacki thanked his new fan base with a short video, vastly underselling his appeal by dubbing the internet’s intense lust “friendly.”

Outside the world of memes, one of the most notable moments of cable news election coverage came when Fox News called Arizona for Biden at 11:20 p.m. on Nov. 3, with just 73 percent of the state’s vote reportedly counted. The call drew the ire of the Trump campaign, prompting Jason Miller, a senior campaign adviser, to dispute its accuracy on Twitter and reportedly call the network to request a retraction that was not granted.

Instead, Arnon Mishkin, the head of the Fox decision desk, appeared on air to defend the call. Given the nature of Fox News’ coverage of Trump over the course of his presidency, the decision came as a surprise to some watching. As of Wednesday morning, the presidential race in Arizona remains uncalled by some outlets—although its 11 electoral votes won’t change the outcome of the election, as Pennsylvania’s 20 electoral votes have been called for Biden.

Trump gave an appearance from the White House briefing room on Thursday, making a number of unsubstantiated allegations of widespread voter fraud and claiming victory in the election. Afterwards, CNN anchor Anderson Cooper appeared on live TV to debunk the President’s claims.

“That is the President of the United States,” Cooper said. “That is the most powerful person in the world. And we see him like an obese turtle on his back flailing in the hot sun, realizing his time is over.”

Video footage of the moment quickly went viral, with some praising Cooper while others criticized him for invoking Trump’s weight in his punchline.

Cooper later apologized for the comment on air. “I regret using those words, because that’s not the person I really want to be,” he said on Saturday. “It was in the heat of the moment, and I regret it.”

In the wake of the Trump campaign launching a series of unsubstantiated allegations of election fraud, including improper mail sorting, lack of access to oversee ballot counting, and Trump posting a number of false and misleading tweets, Fox Business anchor Maria Bartiromo began pushing the campaign’s conspiracy theories on her show, Mornings with Maria Bartiromo.

“Do you feel that the administration has the policing in place to make sure that America will feel that we have gotten a safe and fair election?” she asked Fox News contributor and former GOP congressman Jason Chaffetz, her guest on Nov. 4, in response to his baseless claim that the Biden campaign was working to “try to steal this thing.”

Her remarks came after head of the Fox decision desk Mishkin defended the decision to call Arizona for Biden and Fox News anchor Chris Wallace condemned Trump falsely claiming that he had defeated Biden.

“This is an extremely flammable situation and the President just threw a match into it. He hasn’t won these states, nobody is saying he’s won these states,” Wallace said. “There’s no question that all these states can continue to count votes for days, they don’t have to certify for weeks who has won the state.”

Bartiromo doubled down on her remarks on Twitter, sharing a number of tweets that were flagged as containing disputed and potentially misleading content. She later announced that she was planning on leaving Twitter for the right-wing social media platform Parler, where she has amassed more than 700,000 followers, but has continued tweeting in the days since.

After the Associated Press called Pennsylvania for Biden on Saturday, pushing the former vice president over the required 270 elector votes needed to win the election, CNN anchor Van Jones broke down on air discussing Biden’s victory over Trump.

“It’s easier to be a parent this morning, it’s easier to be a dad. It’s easier to tell your kids character matters, it matters. Tell them the truth matters. Being a good person matters,” he said while openly crying. “And it’s easier for a whole lot of people. If you’re Muslim in this country, you don’t have to worry if the President doesn’t want you here. If you’re an immigrant, you don’t have to worry if the President’s going to be happy to have babies snatched away or send DREAMers back for no reason. It’s vindication for a lot of people who have really suffered.”

But while some were moved by Jones’ tears, others dismissed them due to the history of the CNN anchor’s relationship with the Trump White House.

With additional reporting by Abby Vesoulis. 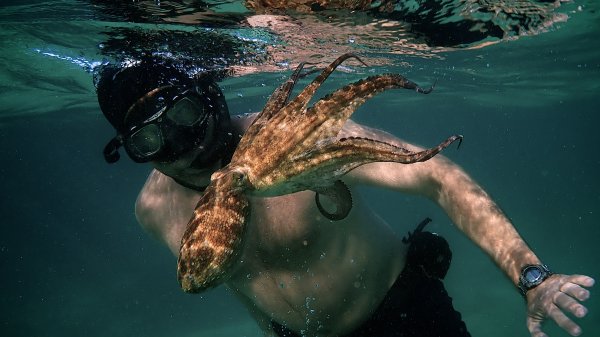 My Octopus Teacher Became a Viral Sensation on Netflix. Its Human Star Craig Foster Wants the Film to Inspire Change
Next Up: Editor's Pick