Hair is important to 18-year-old Jay, from Kansas City, Mo. Before the age of 12, he was severely bullied in school for having long hair and wearing clothing typically marketed to boys. “Cutting my hair was one of the biggest things that happened to me through the transition because it made me feel like I am me,” he says. “I am Jay.”

The new HBO documentary Transhood, out Nov. 12, follows four transgender children and their families over the course of five years. In the film, viewers see how Jay expresses his identity, particularly in two scenes with his barber, who is also a trans man. It’s these scenes that help to normalize, for viewers, the transition process for children and young people, emphasizing that it is a social process first, during which they may alter their hairstyle, clothing or pronoun preference before considering medical changes.

The four young people director Sharon Liese followed in her hometown between 2014 and 2019 show different facets of what it can mean to be trans or gender fluid. Viewers follow Leena, 15 when filming began, and her family as they navigate her later adolescence, the disappointments of her first relationship and her goal to have gender confirmation surgery when she turns 19. Liese also follows Avery, who was 7 when filming began, as she sits for a portrait for the cover of National Geographic’s 2017 “Gender Revolution” issue and faces the pressure that comes with media attention. And in the story of Phoenix, who was 4 when Liese started filming, we see how children’s relationships with their gender identity are not always clear-cut. Phoenix initially says they are a “girl-boy” and later identifies as a girl, before identifying as male at age 7, and Transhood follows Phoenix’s parents as they respond to their child’s evolving identity.

“It’s not unusual that kids know [that they are trans] when they are young,” says Liese. “People ask me, how do kids know when they are four years old? I quickly realized that is not the question. The question is, how do you not believe them?” This was true for Jay, who says he understands why people might have these questions, but who knew that he was trans when he was 5. “It’s not something you just decide. It’s something you discover about yourself,” he says.

“These stories really weren’t being told”

As a Kansas City native, Liese knows the midwestern city well and was able to deeply embed with the four families she followed. The location was also a backdrop for the shifting attitudes around and support networks for trans people. While the Midwest, broadly speaking, is a more politically and religiously conservative part of the U.S., Kansas City, like many urban areas, is more progressive, and is also home to the Transgender Institute, an organization that provides resources and support for transgender people and their families.

Through the Institute, Liese met Jay and his mother Bryce, as well as Avery and her mother Debi, who was raised as a Southern Baptist conservative and never expected to become an advocate for LGBTQ rights. “I just realized that these stories really weren’t being told and there wasn’t that kind of trans representation, over time, about kids,” says Liese. While depictions of transgender people onscreen appear to be evolving for the better, with more transgender people both in front of and behind the camera in critically acclaimed films and series including Orange Is the New Black, A Fantastic Woman and Pose, they largely focus on transgender adults.

Following the families over several years allowed Liese to see the young people as they grew up and experienced different triumphs and challenges. A pivotal moment in the film shows Jay and Bryce on the phone to Jay’s girlfriend Mildred, after photographs of Jay pre-transition circulate on social media. The storyline shows the difficult decisions trans people often make about disclosing their identities. “A lot of trans people do hide. That’s our natural thing to do, because we are so scared,” says Jay. “It is definitely hard to come out to someone that you care about. You wonder if they are going to run or stay.” Although Jay and Mildred, who was one of Jay’s first relationships, part ways after that scene in the film, Jay says Mildred contacted him after recently watching the film and told him how much she enjoyed it. “It was definitely the hardest thing I think, to come out to her during the film, and that was the first person I ever told,” he says.

Liese says that this scene with Jay was “such a pivotal and huge moment for the film, because it can represent what can happen, and what happens frequently” when trans people disclose their identities. “There’s no good guidelines other than ‘when you want to’ when it comes to disclosure. It’s not cut and dry,” she says.

“You can never go wrong by affirming your child”

Avery, one of the subjects of 'Transhood,' with her mother Debi
Courtesy of HBO

As well as hoping that more trans and non-binary youth see themselves represented onscreen in Transhood, Liese also wants the film to show parents and others how to be allies and support people through transition. Jay agrees, leaning into the relationship he has with his mom, and hoping that the film can show parents of trans children that it’s important to check in with them and ensure that they are heard. Through Phoenix’s story, Liese shows that every journey is unique when it comes to gender. Although Phoenix’s parents eventually divorce and have different views on parenting Phoenix, Liese says that the message from that story “is that you really just need to love your kids, and let them lead, and that you can never go wrong by affirming your child.”

As is the case with children who identify as a different gender than the one they were assigned at birth, Phoenix had a social transition before puberty, changing aspects of his identity like pronouns and clothing. Some older children make the decision along with parents and doctors, like Jay did when he was 12, to take hormone blockers to delay puberty. These hormones effectively suspend puberty, and their effects are reversible if a person decides to stop taking them; if a person goes through puberty, physical developments like breast and hair growth are more difficult to reverse. According to the U.S. Centers for Disease Control and Prevention, one in three transgender youth has experienced a suicide attempt. A study published earlier this year indicated that that if transgender youth have access to puberty blockers, their chances of suicide and mental health issues in both the immediate and long-term decline significantly. Toward the end of the documentary, Leena, who was 19 when filming ended, discusses future plans for gender confirmation surgery with her parents and gender affirmation surgeon Dr. Marci Bowers.

For the parents featured in Transhood, navigating their child’s transition as a family is often uncharted territory. “When we started with Avery and her transition, we didn’t feel like there was anywhere to turn to, we didn’t know who to talk to or where to go, and we felt desperately lost,” says Tom, Avery’s dad, during the film. A landmark study by Dr Kristina Olson in 2019 showed that gender-nonconforming kids who go on to transition already have a strong sense of their true identity—one that differs from their assigned gender. The findings of Olson’s study emphasize the importance of affirmative models of care recommended by both the American Academy of Pediatrics and the American Academy of Family Physicians, which are focused on understanding and appreciating a young person’s gender experience in a non-judgemental way. These organizations also stress the importance of supportive parenting and social environments, as Leena and Jay experienced, when making decisions about their healthcare from their families and medical professionals. Transgender Institute also runs support groups, therapy and mentoring for its young trans community in Kansas City.

A call to action at a critical moment

Leena, whose later adolescence is documented in 'Transhood'
Courtesy of HBO

Ultimately, the film is as much a call to action to advocate for legislation protecting trans rights as it is a portrayal of the complexity of transgender lives. During President Donald Trump’s tenure, various levels of government have enacted major changes impacting the rights of transgender people and LGBTQ people more broadly, including a declaration that requires schools in Connecticut to ban transgender students from participating in school sports and the rollback of an Obama-era federal rule that protected transgender people from discrimination by homeless shelters and other housing services.

Looking back on the film now, a year since filming ended, Jay feels he has changed a lot. He now feels more outgoing, and more open to talking about the documentary. He sees the film as a broader coming out, where more of the people he went to community college and graduated with will learn that he is trans and understand more about his experience. “I’m excited, and now I have the mindset that if people don’t like it, that’s O.K.,” he says. He also sees it as vital to show different aspects of what it means to be trans, and dispel some of the intolerance and misperceptions about trans people. “I can’t make everyone like me and understand, but at least they can watch this film, and hopefully they can see that [being trans] is O.K. and they don’t need to judge me for it,” he says. “I hope that the documentary opens people’s eyes and opens people’s minds.” 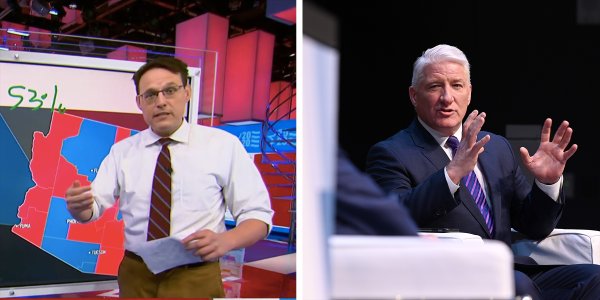 How News Anchors Took Over Election Week
Next Up: Editor's Pick