My Octopus Teacher Became a Viral Sensation on Netflix. Its Human Star Craig Foster Wants the Film to Inspire Change

The dense kelp forest off the southern tip of South Africa is home to an unparalleled diversity of sea animals including sharks, rays, and, once upon a time, a common octopus that has just had an uncommon run as the star of the new Netflix documentary, My Octopus Teacher.

Her onetime den lies a couple of dozen feet off the coast of Cape Town suburb Simon’s Town. The Octopus is long gone—octopuses rarely survive more than 18 months in the wild—but her co-star and “student,” filmmaker Craig Foster, still visits her former home in daily dives that are as much about pilgrimage as they are about science. “When an animal has such an influence on you… you can’t help but love the environment that made her,” he says, gazing down at her kelp-forest cove from the picture window of his cliffside bungalow. “Going there feels like going home.”

Foster’s land-based home is laden with treasures brought back from his own hunting expeditions. Shells and sea glass colonize the flat surfaces. Stacks of abalone shells the size of dinner plates teeter in a corner. The skin of a small shark wraps around a driftwood pillar. It’s as if, piece by piece, he is trying to bring the ocean into his living room.

Since it premiered on the streaming platform in September, the documentary has become a viral hit. Although Netflix does not release viewer data, it says it has been a global success, in the top 10 most watched in Israel, South Africa and Australia. Amy Schumer recommended it to her 10.2 million Instagram followers.

With the same introspective cadences of the film’s voiceover, Foster muses that in a time of growing separation from nature, the film has triggered a fundamental human longing to reconnect with our origins. “Just under the skin we’re still fully wild. And I think this touches on what it’s like to glimpse that.”

How a filmmaker became a student

My Octopus Teacher tells the story of the unusual bond between Foster and a wild octopus he encounters while freediving. For more than a year Foster follows her on daily dives as she hunts for prey and evades her predators with an uncanny ingenuity that calls into question human assumptions of superior intelligence.

But Foster is no detached observer. He also documents his own efforts to understand her world and how that quest led to emotional and intellectual growth. “She taught me humility,” he says, while grazing on a post-dive snack of wholegrain toast with butter. “She taught me compassion. She opened my mind to just how complex and precious wild creatures are.”

Celebrated for his groundbreaking 2000 film, The Great Dance, about the San bush-hunters of the Kalahari desert, Foster found himself in 2011 burnt out and physically wrecked by the stress of trying to survive as a nature documentary filmmaker. He felt like he had lost his connection to the world around him, he says, and even to his own family. He recalled the San hunters’ deep immersion in nature and realized that was what was missing in his life. “I desperately wanted to have that feeling,” he says. “If I could spend every day in a wild environment, how well could I get to know it? Could I learn to read tracks like the hunters in the Kalahari? Could I predict animals’ behavior?”

Rather than go to the desert, he turned to the sea at his front door, and vowed to himself to free-dive every single day for ten years. Braving frigid waters and epic storms, Foster has rigidly kept that commitment. The experience has been transformative, he says. “The cold calms you. It fills your brain with these feel-good chemicals. And then you’re in this golden forest, this liquid environment that hasn’t any gravity. And that becomes your underwater home, especially if you’re visiting it every day.”

It was only several years in that the strange behavior of a small speckled octopus sparked his curiosity, and kept his attention for the duration of her short life. By studying her actions and observing her learn, play and recover from injury, he applied lessons to his own life — even knitting together a fractured relationship with his son.

While Foster documented every dive with a video camera, he did not set out with a plan to make a film. His goal was to better understand the complex ecosystem at his front door, and in doing so, draw attention to what he calls the Great African Sea Forest, a 1200-kilometer-long stand of golden sea bamboo, or kelp, along Africa’s southwestern coast. One of only eight kelp forests in the world, it is vital for ocean biodiversity but little known outside of conservation circles.

In order to safeguard the region, Foster cofounded The SeaChange Project in 2012. “The idea was to get this great African Sea Forest, the home of the octopus teacher, recognized as a global icon, like the Serengeti or the Great Barrier Reef.” He is hoping that the success of My Octopus Teacher, which was backed by his NGO, will effectively brand the sea forest in the popular consciousness. “You have to name a place in order for people to care about and protect it,” he says.

His snack finished, Foster gets up to give a tour of his collections. An old library card catalogue has been repurposed as a specimen case, each drawer containing shells found in the abandoned den of a single octopus. Some octopuses were urchin specialists, others hunted giant turbo snails. As Foster points out a tiny hole in an abalone shell that shows where an octopus has drilled down to get at the creature inside, his quiet reserve disappears. Each item has a story, and he starts tripping over his words in an attempt to tell them all. “This is a helmet shell snail,” he says, picking up a creamy orange spiral. It took him two years of dedicated tracking to figure out how it killed sea urchins, something, he says “even scientists didn’t know.”

One doesn’t need an exotic location (or an octopus) to reconnect with nature, Foster says. While he was fortunate to have the ocean at his doorstep, wildlife teachers can be found anywhere, even in the middle of a city. “If you suddenly took one tree in New York and figured out how that tree changed over 365 days and what animals interacted with it, what insects live in there, how that tree is surviving, I think that could have quite a large effect on your life.”

For Foster, it’s that intimate knowledge that offers real transformation. Just a few months shy of completing his ten-year vow, Foster says he can’t imagine ever giving up his daily dives. He’s not even tempted to dive anywhere else. “The amazing thing is that when you get to know this kelp forest like I have, it’s the most exciting place to dive on earth because you’re just about to solve ten amazing mysteries. You know that crab. You know that octopus, and you just can’t wait to know them better. So I’d actually rather be here than in some exotic place.”

And the discoveries keep coming. Just this morning he found an unusual sea star, one that was blue when it should have been orange. Is it an aberration? A mutation? Or a whole new species? He doesn’t know, but he can’t wait to get back into the water to learn more. As with the octopus that changed his life, “It always starts with these little mysteries… all these mysteries you’re trying to figure out.” With any luck, that sea star may become his next teacher. 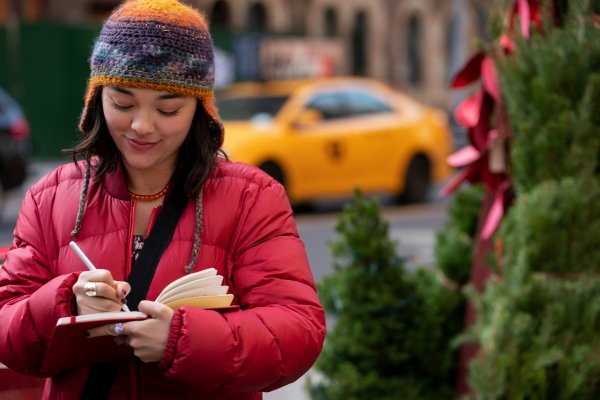 Whether You Loved Emily in Paris or Hated It, Dash & Lily Is Your Next Escapist Netflix Binge
Next Up: Editor's Pick