I Knew Alex Trebek for 16 Years. He Wasn’t Just a TV Host—He Was Part of America’s Family

Alex Trebek hosted Jeopardy! every weeknight, every season, for more than 36 years, an astonishing uninterrupted run of over eight thousand shows. (The only asterisk: April 1, 1997, when he swapped in as the host of Wheel of Fortune instead, as an April Fools’ gag.) Over that span, he asked contestants almost half a million questions—er, answers. No one in the history of television has hosted more game shows, according to Guinness.

As a Jeopardy! contestant, I knew Alex, who died Sunday from pancreatic cancer, for 16 years. But I watched him almost my whole life. When I was a kid living overseas in South Korea, the U.S. Armed Forces TV network aired Jeopardy! in the afternoons, and I would run home every day after school to see it. All my friends watched it religiously. For English speakers, there was literally nothing else on.

Jeopardy!, the beloved 1960s quiz show, had been relaunched in syndication in 1984, and we could immediately tell there was something different about the host. Alex was something of an exotic presence in the game show ecosystem then: the Canadian accent, the curly hair, the mustache. And he didn’t grin and bound around the stage like a stereotypical game show host. He was a cool, authoritative character. Toward the contestants, he could be stern, even a little prickly. He ran a tight ship.

Later, watching Alex host the show from up close, I understood the persona better. Running a fast-paced show like Jeopardy! is a harder job than viewers realize; the host is not only moderating the game for the three contestants, but he’s also interpreting it for viewers. In sports terms, he’s the referee and the broadcast booth all at once. Alex wasn’t aloof; he was just busy. But he always made it look easy. And despite that daunting job description, he was never introduced, as Art Fleming had been in the 1960s, as “the star of Jeopardy!” At Alex’s own insistence, he was always just “the host of Jeopardy!” The star of the show, he always maintained, was the game itself.

Alex was a natural for the erudite, dignified Jeopardy! vibe, and he enjoyed the fact that his singular job description turned him into a familiar figure in popular culture and comedy. But he was always in on the joke; he was playing Alex Trebek. The off-camera Alex was the son of an immigrant family from working-class Sudbury, Ontario, and after Jeopardy! tapings I would often see him in a baseball cap and dad jeans, heading for his pickup truck. Sometimes one of his kids was in tow. He was on his way home to work on one of his endless DIY projects around the house: the roof, the plumbing, the pool. Alex was a throwback to a generation of self-reliant, self-taught generalists—curious about everything, eager to try everything for himself.

As Jeopardy! aged into a TV institution, Alex became an elder statesman. He sometimes seemed like a visitor from another time, quizzing players about Chopin études and the War of 1812 in defiance of the Real Housewives marathon just a remote-click away. He was such a reassuring figure if you cared about facts and learning—particularly if you were a kid who cared about facts and learning. “Eleven-year-old me felt like he was Gandalf,” my Jeopardy! All-Stars teammate Monica Thieu once commented. “He was just this emblem of… I don’t know. Wisdom?”

I’ve compared Alex to Walter Cronkite before, and sometimes that’s met with pearl-clutching about what it means for our era that a mere quiz emcee might be our heir to one of the great newsmen of the century. But I never meant to equate the two men in terms of their importance, or even their gravitas. Alex was, rather, the last Cronkite of reliability. He was part of the fabric of America’s evening—the center of a gathering place for the whole country, even as media was balkanizing into a million little niches everywhere else. People invited him over every night for decades, just to hear the calming sound of his voice. He wasn’t just a broadcaster. He was part of the family.

Hollywood honors Alex Trebek on the Walk of Fame after the announcement of his death on Nov. 8, 2020.
GC Images—2020 Bauer-Griffin

The wonderful secret of Jeopardy! is that it’s exactly what you expect, every evening. The show that aired last night is the same format as one that aired in 1985, almost down to the second. People lean on that. It’s been 16 years since my streak on the show, and strangers still stop all the time to tell me stories about what Jeopardy! means to them. It’s almost always a multigenerational tradition, a fond memory. It reminds them of their college student who still FaceTimes home to play Jeopardy! against Dad, like she’s been doing since she was little. Or the parent they know never to call during Jeopardy!, because no one will pick up the phone during that hallowed half hour. Or the grandparent they watched with every night in the hospital, right up until the end. Jeopardy! was one of the first shows back in the studio after this year’s COVID-19 shutdown, providing a daily slice of normalcy when America needed it most.

Alex was the face of all of that, and as a result, his announcement in March 2019 that he had stage 4 pancreatic cancer—a simple on-set video in which he explained his diagnosis in the same matter-of-fact, unflappable tone with which he might read a Daily Double clue—was met with an avalanche of shock and concern. Hundreds of thousands of people sent messages of love and support. He was surprised, and touched. “Most people don’t get to hear all that nice stuff during their lifetime,” he told me. “Their families hear it after they go.” He meant so much to people, and he had no idea. Towards the end, he finally got the chance to see it firsthand.

Aside from January’s “Greatest of All Time” tournament, the last time I saw Alex host the show in person was the final taping of Jeopardy!‘s 35th season, last year. He had recently announced his diagnosis, and the studio audience was packed with former contestants and other friends of the show. Jeopardy! tapes a week’s worth of shows, five games, back to back in a single afternoon, so those can be long days. Alex had been hosting through quite a bit of pain in recent weeks, but on that Saturday afternoon he felt pretty good. Backstage, he looked tired from the chemotherapy, maybe a little more worn than usual. But once the music started and the announcer called his name, he could turn it on and stride onstage with the old, cool confidence. He could turn into Alex Trebek.

At the end of every set of shows, Alex always returned to the stage to thank the studio audience and give them a warm, funny little goodbye speech. “When this program airs, make sure you watch it with someone who doesn’t know you were there, and impress them by knowing all the answers,” he might say. “Maybe place a little side bet.”

Alex would go on to host Jeopardy! for another season and a half, but after the final shows of that afternoon, when he came back out to say goodbye, he was clearly wondering if this might be the last time. “Thank you,” he said hoarsely, after a long pause. Then, too emotional to add anything more, he turned and walked upstage. The standing ovation continued for over a minute, but he was gone. 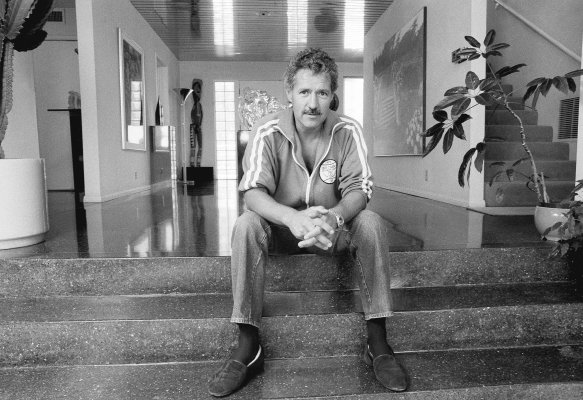