As Biden Wins the Presidency, Trump Digs in for a Fight

By Tessa Berenson and Brian Bennett

Donald Trump lost the presidency while he was at one of his golf courses.

The news came on an unseasonably warm and sunny fall day in Washington, and as major networks and the Associated Press called the presidential race for Joe Biden after nearly five days of vote counting, Trump was playing a round of golf at his course in Sterling, Va. More than five hours after the race was called for Biden, after he had returned to the White House, Trump tweeted, “I WON THE ELECTION,” and perpetuated baseless claims of fraud. Trump then tweeted that he had received nearly 71 million votes, without mentioning that Biden has received nearly 75 million. (The count is ongoing, as is typical so soon after a presidential election, and it will be weeks until state and local election officials certify the final results.)

A statement from the Trump campaign on Saturday morning suggested their fight will continue. “The simple fact is this election is far from over,” read the statement, attributed to Trump himself. “Joe Biden has not been certified as the winner of any states, let alone any of the highly contested states headed for mandatory recounts, or states where our campaign has valid and legitimate legal challenges that could determine the ultimate victor.” Starting on Monday, the statement read, Trump’s campaign will press forward “prosecuting our case in court to ensure election laws are fully upheld and the rightful winner is seated.”

During the week of the election, the Trump campaign filed roughly a dozen lawsuits in battleground states around the country, but election experts tell TIME that none are likely to change the outcome of the race. Trump’s aides inside the White House are settling in for days of legal challenges to give Trump’s supporters more certainty in the result.

“Do all the court challenges, all the recounts, so that there’s a consensus at the end of the process so everybody says we know for certain that one guy lost and one guy won and we can all be big boys and girls and move on,” says a White House official. “Let’s get this done right, now,” the official says, otherwise “you leave this as a wound to fester.” The official thinks that Trump will concede if he doesn’t win after his legal challenges are exhausted.

For the moment, Trump’s mood is black. “He’s ripsh-t,” a former White House official still in touch with Trump’s inner circle said on Friday, before the race was officially called by the AP. “He thinks that they stole it, and he wants it to play out in the legal fights,” the former official says. Despite Trump’s repeated claims, there is no evidence of wide-spread voter fraud in the election.

A White House spokesperson did not answer when asked Saturday afternoon whether Trump has spoken to Biden today, or whether he plans to concede, instead pointing to the statement the Trump campaign had released earlier in the day. Just before 4 p.m. ET, the White House signaled that Trump would not make any public appearances for the rest of the evening.

When asked about Trump not conceding the race on Saturday, Symone Sanders, senior advisor to Biden’s campaign, said, “Donald Trump does not get to decide the winner of elections. The people decide, voters in the country decide— as we have long said— and voters have made their choice very clear.”

If Trump refuses to concede, it would be historic. “There is no precedent for a defeated candidate in a presidential election to refuse a concession,” says Timothy Naftali, a history professor at New York University. There’s no rule that says a defeated incumbent has to concede, and refusing to concede doesn’t change the outcome of the race. But it has symbolic importance.

“Rituals have a purpose, and traditions have a purpose,” says Naftali. “The reason here is that what you want most of all is for the person who’s elected to be viewed legitimately by all Americans as their head of state. And if you have a candidate who doesn’t concede, it’s as if he’s saying, to in this case over 70 million people, you were cheated.”

While Trump has refused so far to publicly accept the results, the city around him has. Cars honked, music blared and people took to the streets in D.C. around the White House to celebrate his defeat on Saturday.

Fault lines quickly emerged among other Republican leaders over whether to support Trump’s inaccurate claims of a corrupt process and unwillingness to accept the reality of a loss. Ambassador John Bolton, Trump’s former national security advisor, called it a “character test” for Republicans. “Any candidate is entitled to pursue appropriate election-law remedies if they feel there has been misconduct or error,” he said in a statement. “But no one, especially a sitting President, should disparage our electoral system without hard facts.” In a Wall Street Journal op-ed, former White House chief of staff Mick Mulvaney wrote that Trump would commit to a peaceful transition of power, but noted that he will “will fight like a gladiator until the election is conclusively determined.”

“I’m afraid it could be a long couple of months, but I’m hopeful it won’t be,” says Republican Maryland Gov. Larry Hogan. “If there are legitimate concerns—there’s always going to be a few abnormalities, if it’s within the margin for a recount that’s perfectly legitimate and a part of the process. What we want to avoid is frivolous lawsuits that drag out the result of the election and continue to keep us divided at a time when we need to come together.”

So far, Trump has given no indication that he’ll work to bridge that divide. 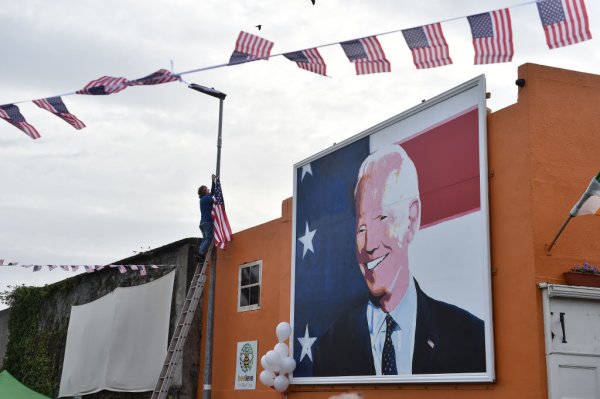 Joe Biden's Election Win, by the Numbers
Next Up: Editor's Pick