If President Donald Trump’s fact-free rant late Thursday in the White House briefing room tested the elasticity of the imagination, then it snapped some Republicans’ patience with a man whose time leading their party may be coming to its end.

Trump declared yesterday — without evidence — that he was simultaneously the victor in Tuesday’s election and the victim of a vast conspiracy by deep-pocketed donors, the media and tech companies who were in cahoots to deny him his rightful second term. He asserted — again, without evidence — that pollsters had released bunk surveys so that Republicans wouldn’t show up. For good measure, he claimed without evidence that states were manufacturing ballots for Biden. And he promised that he had evidence of it all that he would use in court challenges, which to this point have given Trump few meaningful rulings. He just wasn’t sharing it with the reporters at the White House that time.

As my TIME colleague Brian Bennett explains: “State and local officials run the counting of votes, and the certification of election results, not the President.” The headline on his dispatch: “President Trump Is Struggling to Face the Possibility That He Lost.”

Trump’s behavior suggests he knows things are not going well for his bid to stay in power. Biden is within striking distance of a win. A victory in any of four states — Nevada, Georgia, North Carolina or Pennsylvania — could put Biden over the 270 Electoral College votes any President needs. Trump needs to win all four to stay in office, which helps to explain why he has lawyers trying to stop the vote counting in those states. As he spoke, Trump was ahead in three of the four as election officials were turning to mailed-in ballots in the big cities, possibly giving Biden the chance to narrow his deficits and possibly overtake Trump.

“If you count the legal votes I easily win. If you count the illegal votes they can try to steal the election from us,” Trump said, providing no evidence that mail-in or absentee ballots were being cast or tallied illegally. To Trump’s mind, apparently any votes not counted on Election Day were illegal. Perhaps that is why Republicans in the state legislatures in Michigan, Wisconsin and Pennsylvania successfully changed the process so that mailed-in ballots could not be counted before Election Day.

Privately, Republicans have been grimacing throughout the week. Trump’s early-morning speech on Wednesday declaring victory — again, falsely, and without any reason to do so at the time — rubbed GOP leaders the wrong way. Immediately after Trump stopped speaking, former New Jersey Gov. Chris Christie told his fellow commentators on-set in ABC’s Manhattan studios that it was a mistake.

Now, as the week comes to an end, some Republicans are publicly telling the White House to knock off the efforts to plant doubts that the election was free and fair, or that Trump was a victim of an electoral hijacking.

“With his remarks from the White House tonight, the President disrespected every single American who figured out a way to safely vote amid a pandemic that has taken 235,000 lives,” former Homeland Security Secretary to George W. Bush and ex-Pennsylvania Gov. Tom Ridge said. “Not to mention those who are dutifully counting that vote. Absolutely shameful. Yet so predictable.”

Since Trump descended into the lobby of Trump Tower on Fifth Avenue back in 2015 and entered the presidential race with a racially charged speech, his fellow Republicans have been tested time and time again just how far they could bend. They tolerated the taunting tweets, the name-calling and bullying, the blatant disregard for ethics laws. They looked the other way during the brutal impeachment and trial of the Republican leader. They stepped to the side in many cases so as not to get caught in the shadow of an unfunded Border Wall. Even his misleading comments about the deadly coronavirus pandemic — now raging through the country — have been lumped with his other non-factual statements.

That uniform self-censorship seems to be fraying.

“If you have legit concerns about fraud present EVIDENCE and take it to court. STOP Spreading debunked misinformation… This is getting insane,” tweeted Rep. Adam Kinzinger, an Illinois Republican.

Rep. Will Hurt, a Texas Republican who chose not to seek re-election this week, cast the President’s comments as deeply troubling. “A sitting president undermining our political process & questioning the legality of the voices of countless Americans without evidence is not only dangerous & wrong, it undermines the very foundation this nation was built upon,” the former CIA spook tweeted.

Added Sen. Marco Rubio of Florida: “If a candidate believes a state is violating election laws they have a right to challenge it in court & produce evidence in support of their claims.” Rubio is openly considering a 2024 bid for his party’s presidential nomination.

More reliable critics of their fellow Republican also took their criticism to Twitter, where the likes of Maryland Gov. Larry Hogan, Sen. Mitt Romney of Utah and former Sen. Jeff Flake of Arizona were similarly exasperated.

The pique over the President’s performance yesterday has even his nominal allies worried about what comes next. “Our nation demands that its political leaders accept both wins and losses with grace and maturity. Let the voters decide,” tweeted Rep. Paul Mitchell of Michigan. Sen. Mike Lee of Utah said it’s time to “allow the vote counters to do their job.” From swing state Ohio, which Trump won, its Governor urged patience. “Every vote has to be counted. We as a country accept election results. We believe in counting all the votes,” Mike DeWine told Fox News. And Sen. Rob Portman of Ohio, who has been careful in his stance toward Trump, issued a statement urging the count to be conducted with deliberation and not urgency.

Candidates fighting for their political survival are seldom cautious. If anything, given the odds that the President is watching his chances of a second term dim with each counted ballot, a leader known for lashing out and scorched-earth tactics could still redefine the limits of his office. We have already seen the President’s family menace those who dare challenge the comments.

“The total lack of action from virtually all of the ‘2024 GOP hopefuls’ is pretty amazing,” Donald Trump Jr. tweeted. “They have a perfect platform to show that they’re willing & able to fight but they will cower to the media mob instead.” His brother, Eric Trump, seemed to suggest Republicans who don’t back up the President’s claims will pay a price. “Where are Republicans! Have some backbone. Fight against this fraud. Our voters will never forget you if your [sic] sheep!” he tweeted.

Indeed, despite the flurry of public comments, most Republicans were expected to fall in line, especially if they fear a career-long grudge-fest from Trump Tower. Trump is still a massive figure in Republican politics and even in defeat he will still have sway over much of the party.

But he’s not going to be in power forever. Those looking closely enough could find cracks in his hold — or hear them in Senate Majority Leader Mitch McConnell’s voice when asked about Trump’s Wednesday self-proclamation of a win. “Claiming you win the election is different from finishing the counting,” McConnell said. “And what we’re going to see here in the next few days, both in the Senate races and in the presidential race, is each state will ultimately get to a final outcome.”

So, too, will the party. 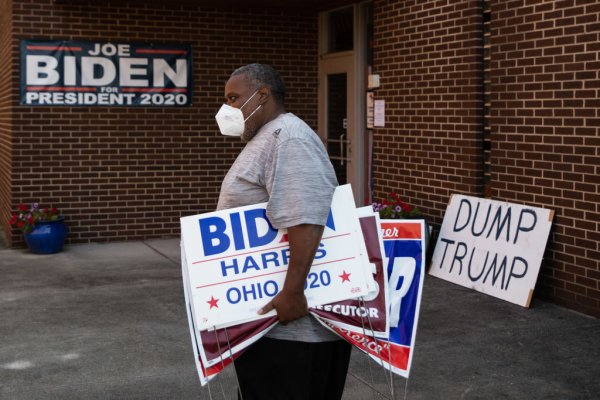 Did Biden Win Back Democratic Defectors?
Next Up: Editor's Pick