Hungary Is Sliding Toward Authoritarianism. Can the Mayor of Budapest Save It?

Karacsony in Budapest’s city hall on Aug. 26. The opposition now has a “real chance” of uniting in victory, he says
Peter Hapak for TIME
By Vivienne Walt/Budapest

On a recent autumnal night in Budapest, about 1,000 people jammed the narrow street outside the city’s prestigious University of Theatre and Film Arts, as speakers on a makeshift podium railed against Hungary’s far-right Prime Minister Viktor Orban. “We have had enough of this civil war!” bellowed the filmmaker Szabolcs Hajdu, just hours after the government effectively removed the school’s longtime leaders and replaced them with Orban’s political loyalists. “This is not just about the university,” Hajdu shouted. “It is about the whole country.”

The crowd needed little persuasion that their country was inching toward authoritarianism. Orban and his Fidesz party won overwhelming control of Hungary’s parliament in early 2010 and set about building what the Prime Minister himself calls an “illiberal democracy.” In the decade since, Hungarians have seen judges and bureaucrats appointed for their political fealty, the media transformed into pro-government propaganda and civil-society groups starved of resources.

Then came the pandemic. With the world in crisis and Hungary under lockdown, Orban declared emergency measures in March, granting himself the power to bypass parliament and rule by decree. COVID-19 data was to be strictly controlled, with doctors telling inquiring politicians and journalists that they were forbidden to talk publicly about the crisis. Those who criticized the government online faced arrest. On paper, the emergency measures expired in June, but the government’s grip on power has not loosened. What few remaining independent news sites remain are being silenced, and public universities like the University of Theatre and Film Arts are being privatized, with control handed to Orban’s allies. In May, the Washington-based rights group Freedom House said Hungary no longer qualifies as a full democracy.

Opposition parties fight among themselves, and the E.U., which ostensibly requires member states to operate as democracies and free of corruption, has proved toothless. Orban has brazenly flouted Europe’s rules ensuring press freedom and an independent judiciary.

Yet here on the streets of Budapest, there are finally signs that Orban’s rise might have peaked. In a shock victory in October last year, Gergely Karacsony, a 45-year-old former member of parliament from the left-wing environmental party Dialogue, ousted one of Orban’s strongest allies, who had presided over the capital since 2010. Losing Budapest, which makes up more than a third of Hungary’s economy and has one-fifth of its population, dealt a body blow to Orban, suggesting for the first time that he might be susceptible to a challenge. “It really brought a spiritual boost,” says Akos Hadhazy, an opposition member of parliament. Before, he says, “people just did not believe it was possible to win against Orban.”

Now, after a year in his mayoral suite in the capital’s grand 18th century city hall, Karacsony (pronounced Ka-rat-shawng) has been thrust into a leading role, attempting to knit together an opposition capable of toppling Orban. Hungary is scheduled to hold parliamentary elections by April 2022 at the latest. Although Orban has a commanding two-thirds majority in parliament, a fourth term in office no longer seems entirely inevitable. “We have a real chance now against Orban, the biggest chance we have had in 10 years,” Karacsony tells me one drizzly September morning in Budapest. “But 2022 might be the last chance … If Orban stays in power, the hollowing out of democratic institutions will be complete.”

Karacsony does not seem an obvious figure for a knife fight against Europe’s pre-eminent strongman. He lists among his passions jazz and cycling, and when he speaks about Hungary’s political battle, it is in soft tones and measured phrases.

Yet it was he who emerged as the consensus mayoral candidate among five squabbling opposition parties in October 2019, after five years as the elected leader of one of the city’s districts. Perhaps not believing he would actually defeat the incumbent, a stalwart Orban ally, he watched the election results come in from a small bistro surrounded by only close aides and friends.

Up in the old mayor’s office, Karacsony is now tackling the city’s deepest crisis in years. Only a handful of months into his term, the first cases of COVID-19 began showing up in Hungarian hospitals. From the start, Karacsony realized he would need to fight hard against a hostile government to get Budapest its fair share of help. He says he was stunned to be invited in April to meet government officials to discuss coordinating their crisis response. Karacsony told them Budapest was in dire need of cash, in part to replace revenues lost from public transportation, since city buses and trains were at a standstill under the lockdown.

But the government’s gesture of inclusiveness was hollow, he says. By introducing the emergency laws, allowing it to operate without consultation, Orban had ensured an all-out collision with his critics. “It was a trap,” Karacsony says. “It was something the opposition parties could not possibly vote for … That’s how he created the illusion that the opposition was obstructing the rolling out of the pandemic measures.”

As the pandemic wore on, Orban’s government dramatically tightened the flow of information on COVID-19, ignoring media requests for more detailed data on infections and deaths. At the same time, Karacsony says, the Prime Minister’s allies channeled public funds away from opposition municipalities and to their own localities.

It all served to help persuade Karacsony to play a leading role in convening the opposition. In August, he helped coordinate a virtual meeting among leaders of six opposition parties, to begin plotting their strategy to oust Orban. Topping the agenda was an agreement not to field competing candidates against him, a factor that had allowed Orban sweeping wins.

Sitting in his office, Karacsony says that in order to defeat Fidesz, opposition politicians must be unified. “Once that is done, the opposition can focus on attracting swing voters in the middle,” he says. He believes they should also avoid making the election all about Orban. Instead, they should forge a new, unified platform, including improved public health and reviving the economy, which has been battered by the pandemic. “We should not even mention Orban’s name,” he says.

The opposition may yet be helped by the E.U., whose leadership is finally considering whether to act against its most renegade member. In Brussels, politicians have spent months arguing over whether to make investment from its $887 billion pandemic recovery fund contingent on Hungary’s committing to rein in corruption and protect democracy. “There’s a very, very hard discussion about whether E.U. should punish them for the rule of law,” says Katalin Cseh, a Hungarian lawmaker in the E.U. Parliament opposed to Orban and Fidesz.

In September, the European leadership issued a first-of-its-kind report into the rule of law in Europe that heavily criticized Hungary, detailing multiple allegations of corruption and abuses of judicial independence. Vera Jourova, the bloc’s values and transparency commissioner, described Hungary as an “ill democracy,” prompting Orban to demand her resignation. Cseh says that unless Brussels now places conditions on the coronavirus relief funds, corruption will grow worse. “If the E.U. continues to stand by idly while the Orban regime siphons off taxpayers’ funds to oligarchs,” she says, “it will be very hard to fix in the long term.”

Karacsony too sees this as a tipping point, accelerated by the deep economic crisis. In mid-October, he led a group of opposition mayors across Hungary to demand that the government funnel half the COVID-19 relief funds it is due to receive from the E.U. directly to their cities. They fear that Orban might otherwise direct the money to mayors who support him.

If that happens, Karacsony says, Orban’s years of financing his political allies might finally backfire. He is betting that as the recession deepens, Hungarians might question more closely why some of them have grown extraordinarily rich through the Orban decade. Not even Orban will be able to avert the pandemic-related downturn, and this time there are no foreigners or E.U. politicians to blame. “They have been governing on an economic upswing since 2010,” Karacsony says. “Now, they have a real crisis to manage.”

Winning Budapest is one thing. But take a drive out of the capital, past the city’s cafés, stores and theaters, and it quickly becomes clear how difficult it might be to unseat Orban. The Prime Minister retains huge popularity in the heartland, boosted by years of gerrymandering of electoral districts.

Here in small-town Hungary, many still regard Orban as their protector against outside dark forces, and a booster of conservative values. “The Prime Minister gives people energy,” says Zoltan Tessely, a veteran Orban ally and Fidesz member who serves as the mayor of Bicske, a town of 12,000 people 30 minutes west of Budapest. “He just gives people a good feeling.”

Some of that “good feeling” draws from Orban’s hard-line anti-immigration views. He won in 2018 on a fierce nationalist message, telling people that Europe’s “Christian heritage” was at risk from refugees arriving from the Middle East and North Africa. Although few refugees wanted to settle in Hungary, Orban’s fearmongering hit home nonetheless.

Europe’s migrant arrivals have been steadily declining since 2015, yet among Orban supporters, it is still a hot issue. The government has severely restricted immigration to Hungary, instead trying to boost birth rates with payments to families for each child born and lifetime tax-free status for women who have four children or more.

COVID-19 has only served to strengthen nationalist sentiment among Orban supporters, many of whom see the virus as just another would-be invader. “The migration crisis can easily be connected with this pandemic,” Tessely says. “People came in infected with COVID,” he says. “The pandemic is worse among the migration trail.”

Prevailing against those messages will require an all-out effort from Orban’s critics–and perhaps a unity candidate. Karacsony demurs when asked whether he himself will run against Orban in 18 months. But he is now the leading voice of an emerging political force. His reluctance to declare his ambitions to be Prime Minister, allies believe, could be in order to spare Budapest, and himself, being the target of months of vitriol from Orban.

Increasingly, though, he sounds like he is preparing for battle. In an impassioned speech outside city hall on Oct. 23, the anniversary of the country’s uprising against the Soviet Union in 1956, he implored Hungarians to fight for freedom against authoritarian rule, just as their forebears had done decades ago. “No power should ever define itself as the country it rules,” he said, aiming his anger at Orban. “What makes a strong leader is his ability to unite, rather than divide, people.” 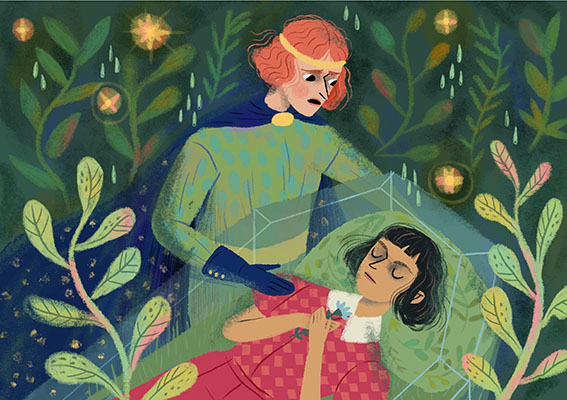 A Children's Book Caught in Hungary’s Fight Over LGBT Rights
Next Up: Editor's Pick