America’s Election Day Hangover: The Uncertain Path Forward Starts to Play Itself Out

There were no major interruptions or incidents on Election Day, as voter turnout skyrocketed across the country. Turnout rates were the highest we've seen in 120 years.
Malike Sidibe for TIME
By Philip Elliott

Welcome to the Day After. If you’re feeling unsatisfied with the results of Election Day, you’re not alone.

There’s no clear winner at any level. We don’t know whose hand will be on the Bible at noon on Jan. 20 of next year to take the presidential oath of office. As of midday, there are still 57 uncalled House races. We don’t have Senate winners in North Carolina, Maine and Michigan, while Georgia remains an open question, too. It looks like Congress will include a Democratic House and a Republican Senate — but if 2020 has taught us nothing, it’s that we shouldn’t get too far over our skis when it comes to predicting things.

Votes are still being counted across the U.S., with the outcome set to be determined by final tallies in a familiar handful of battleground states. In the political balance of power from coast to coast, little seems to have changed since 2018. So far, arithmetic and not violence have been the order of the day, and patience seems to have been a blessing for all who sought it.

Both candidates still have a path to victory. President Donald Trump has won in the states he needed to defend his narrow path to an Electoral College victory, preventing former Vice President Joe Biden from flipping a large number of states Trump won last time. As of now, Biden’s only managed to do that in one state: Arizona. As the day started in the U.S. on Wednesday, vote tallies were trending toward Biden in Wisconsin and were close in Georgia, Michigan, and Pennsylvania.

Also known? Trump did precisely what many election experts had feared: he falsely claimed he had won and, with no legal basis, said the vote counting should stop. Shortly after 2 a.m. Eastern Time, Trump stepped up to a podium in the East Room of the White House and baselessly called the election “a fraud on the American public” and threatened to ask the Supreme Court to stop the lawful continuation of vote counting.

Trump also falsely touted wins in states, including North Carolina and Georgia, which were still too close to call at the time. Trump said without evidence that a “sad group of people” were trying to disenfranchise his supporters. “This is an embarrassment to our country. We were getting ready to win this election,” Trump said to a rowdy White House crowd. “Frankly, we did win this election.” No such declaration was supported by media projections.

Little more than an hour before Trump’s remarks, Biden had appeared briefly near his home in Wilmington, Del., to tell supporters and reporters that the results were still unknown and could take some time to become clear. He projected confidence. “Look, we feel good about where we are. We really do,” Biden said at an outdoor and socially-distanced parking lot. “We’re going to have to be patient.”

There were no major interruptions or incidents in Election Day, as voter turnout skyrocketed across the country. Turnout rates were the highest we’ve seen in 120 years, and Trump’s campaign in particular appeared to benefit from his long-time strategy to drive up turnout among his base and bring voters to the polls who had sat out previous elections. As of early Wednesday, Trump had 3.1 million more votes than in 2016, according to The Associated Press. Biden also had 2.3 million more votes than Hillary Clinton. (Clinton lost the Electoral College tally in 2016, but won the popular vote by 2.8 million votes. As votes are still being counted, Biden currently leads Trump in the popular vote by 2 million votes.)

But here’s the thing: this country doesn’t run national elections. Every state and the District of Columbia runs its own count, and so far those tallies are coming slowly. The focus of the race is now on the 2016 battlegrounds of Nevada, Michigan, Pennsylvania and Wisconsin. With mail-in ballot counts only just beginning, it looked increasingly likely that the result won’t not be known until late Wednesday, or even later this week.

Lower down the ballot, House Democrats are on pace to hold their majority in the House. It is less clear what happens next in the Senate. Tantalizingly close Senate races proved slippery for Democrats, who netted seats in Colorado and Arizona but lost one in Alabama. Republicans fended off serious challenges in Texas and South Carolina — both expensive races that bled cash from other contests.

For now, the wait continues. Americans have relied more heavily on absentee and mail-in-voting this election because of the coronavirus pandemic, raising fresh issues about ballot access. Democrats and Republicans have already filed hundreds of election-related lawsuits over whose votes count and how hard it is to access the polls. Election experts have stressed the importance of patience when waiting for the official vote count of all the races. The final results are determined by state and local election officials — and only by state and local election officials. 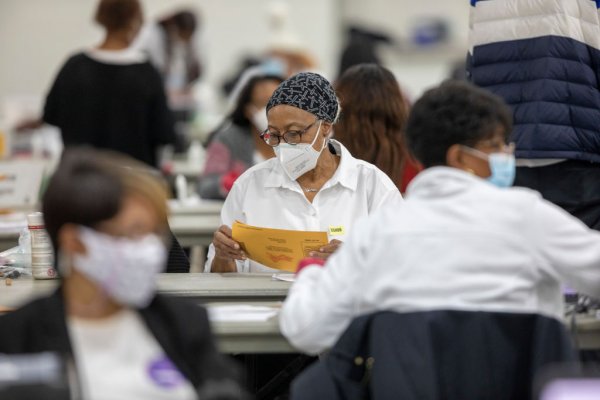 Election Results May Take Awhile — And That's Fine
Next Up: Editor's Pick