Americans voted in record numbers in the days and weeks building up to Tuesday’s election. It will have global repercussions, but has yet to deliver a winner. The vote taking place against the backdrop of a worsening coronavirus outbreak and after months of protests over racial inequality had the potential to be marred by unrest, but in the end passed without significant violence. Naturally, the election was the focus of blanket news coverage on American news media.

If you were among those focusing exclusively on the election and its aftermath, then you might have missed some of these major news events around the world:

Ethiopia’s government declared a six-month state of emergency on Wednesday in the northern state of Tigray following clashes between security forces affiliated with a local political party and federal troops. Internet service was shut down, along with telephone and banking services. In declaring the state of emergency, Ethiopian prime minister and Nobel Peace Prize laureate Abiy Ahmed announced that he had ordered a military offensive in the wake of an alleged attack on a military base.

Tigray state is home to six percent of Ethiopia’s population, but for most of the past 30 years Tigrayans dominated Ethiopian politics. That influence started to wane in 2018, when Abiy came to power, and the region’s ruling party, the Tigray People’s Liberation Front (TPLF), has been demanding greater local autonomy in response. When Ethiopia’s national elections, originally scheduled for August, were postponed due to the COVID-19 pandemic, Tigray unilaterally held its own elections in which the TPLF won all the seats. The vote, which federal officials say has no legal basis, set the scene for the current tensions, in which both sides accuse the other of illegally resorting to military force — Aryn Baker

The number of fires raging in the Brazilian Amazon rainforest in October 2020 was double the figure for October 2019, with 17,326 blazes recorded, according to data released by the country’s Institute of Space Research over the weekend.

It was a particularly concerning month, climate scientists say, since fires normally drop off in October when the rain season starts. October was also the worst month since records began three decades ago for fires in the country’s Pantanal region—the world’s largest tropical wetland, home to dozens of rare plant and animal species. Environmental NGOs say the government of far-right President Jair Bolsonaro has failed to adequately prepare for dry and hot weather, and created a culture of impunity for farmers–part of the president’s political base—who set fires to clear land for their own use.

Bolsonaro denies responsibility for the blazes and continues to reject attempts by the international community to intervene and slow the deforestation—most recently, by Democratic presidential candidate Joe Biden — Ciara Nugent

Ant Group, the financial technology company backed by Chinese entrepreneur Jack Ma, suspended its initial public offering (IPO) on Wednesday, delaying what many expected to be the largest IPO in history, valuing the company at more than $300 billion.

The suspension came after Chinese regulators reportedly warned Ma that Ant would be subject to new rules potentially impacting its growth.

As one of the first Chinese tech giants to go public on home turf rather than in the U.S., the IPO was hailed as a signal of changing economic winds benefiting China’s economy. But the suspension also showed that the Chinese government remains a powerful force governing the fortunes of companies that choose to do so — Billy Perrigo

On Tuesday, Sweden announced a new nationwide rule that groups of no more than eight people will be allowed to share a table in a restaurant amid a spike in coronavirus cases. That day, the country of some 10.5 million people counted a record 10,177 new daily infections, according to Johns Hopkins University (JHU) data. As of Nov. 4, a total of 134,532 people have been infected and 5,969 have died from the virus in Sweden—a far higher death toll than its neighbors—according to JHU. Unlike most countries, Sweden never had a lockdown to stem the spread of COVID-19, largely keeping businesses running as usual.

India’s most prominent news anchor, Arnab Goswami, was arrested by police in Mumbai on Wednesday. Goswami, the founder of Republic TV, is one of the pioneers of India’s adversarial television news broadcasts, which often feature anchors and interviewees shouting over one another.

He is also one of the loudest media supporters of Prime Minister Narendra Modi’s Bharatiya Janata Party (BJP). In broadcasts, Goswami is known for whipping up nationalist sentiment against critics of the party, often labeling them “anti-national.” The arrest in Mumbai was in relation to the 2018 suicides of an interior designer, who accused Goswami of not paying him money he was owed, and the designer’s mother. Goswami denies wrongdoing.

Senior BJP figures spoke up in Goswami’s defense on Wednesday. Because the police in Mumbai report to the opposition party that runs the state of Maharashtra, many alleged an abuse of power. “Blatant misuse of state power against Republic TV & Arnab Goswami is an attack on individual freedom and the 4th pillar of democracy,” said Amit Shah, the Indian Home Minister, on Twitter. “This attack on free press must be and WILL BE OPPOSED.”

While press freedom in India is dire—the country ranks 142nd in the world in Reporters Without Borders’ 2020 press freedom index—critics pointed to double standards as government ministers spoke up in defense of Goswami, given the role of the BJP and its supporters in regularly intimidating or arresting journalists. “When Left-liberals are put in jail as political prisoners, Right-wingers say the law will take its own course,” the Indian columnist Shivam Vij wrote Wednesday in the Print. “Why not let the law ‘take its own course’ in Arnab Goswami’s case?” — Billy Perrigo

Labourers work at a construction site in the Saudi capital Riyadh on June 6, 2020
Fayez Nureldine / AFP via Getty Images

Saudi Arabia announced reforms to its labor system on Wednesday that will potentially allow more than 10 million foreign workers to change jobs, travel overseas, or leave the kingdom without their employers’ permission. The new measures, set to be implemented in March 2021, are designed to improve working conditions and “make Saudi Arabia’s labour market more dynamic and productive,” Sattam Alharbi, a deputy minister at Saudi Arabia’s Ministry of Human Resources and Social Development told Bloomberg.

Ahead of Saudi Arabia’s virtual hosting of the G20 summit later this month, the reforms promise to address an aspect of the Gulf-wide visa-sponsorship system known as Kafala, which has long been criticised for fostering exploitative working conditions throughout the Gulf. Qatar, which is set to host the 2022 World Cup, has recently introduced similar changes. Human advocates said that if properly implemented, the new measures could improve conditions for migrant workers who comprise about one third of Saudi Arabia’s population. But they don’t abolish Kafala entirely, nor do they extend to million domestic workers “who are at most at risk of abuse by employers,” Human Rights Watch’s Rothna Begum wrote on Twitter. — Joseph Hincks 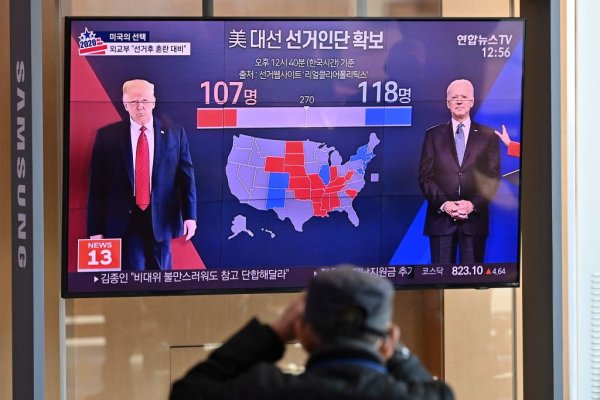 How the World Is Reacting to the 2020 U.S. Election
Next Up: Editor's Pick