As state and local election officials continue to count ballots across the country and with the fate of most battleground states still up in the air, President Donald Trump delivered a short, disjointed speech from the East Room of the White House, appearing to claim that he had prevailed over former Vice President Joe Biden and vowing to fight official election results in the courts.

Millions of ballots in battleground states remain uncounted. The Associated Press has not yet projected a winner of the race and states will not complete their exhaustive counts for several days.

“Any attempt to call the election before votes have been counted should not be taken seriously,” says Joanna Lydgate, national director of the Voter Protection Program, a bipartisan group working to support state and local election officials. “All votes need to be counted and no candidates get to try and steal the election by calling the winner before that happens.”

Trump also baselessly claimed the election is “a fraud on the American public” and touted a win in states, including North Carolina and Georgia, where he is leading in early results, but had not yet been called to win by the Associated Press.

Trump said he would fight election results in court. “We’ll be going to the U.S. Supreme Court,” he said. “We want all voting to stop. We don’t want them to find any ballots at 4 o’ clock in the morning and add them to the list, ok?” Trump added: “We will win this. And as far as I’m concerned, we already have won.”

Trump’s claims are both flawed and dangerous, multiple election experts say. Because Democrats are more likely than Republicans to cast a ballot by mail this year, many of the remaining ballots that have yet to be counted in states such as Pennsylvania, Michigan and Wisconsin—which didn’t get an early start on processing absentee ballots—are likely to skew blue.

Meanwhile, ballots left to be counted in states, including Florida and Ohio, that have already been called for Trump, did get early starts on mailed ballots and may disproportionately favor Republicans.

In a speech from Wilmington, Del., after midnight on Nov. 4, former Vice President Joe Biden projected confidence in the system. “We knew this was going to go long,” Biden said, acknowledging that election results would not be immediately forthcoming. “We feel good about where we are. We really do.”

The winner of the Presidential election remains unclear.

In Wisconsin, for example, 39 municipalities require counting absentee ballots at different locations than in-person ones cast on Election Day, increasing the possibility that mail ballot results will be released after in-person results.

Because of the partisan disparities surrounding voting methods, the results of in-person votes in some counties are likely to favor Trump. A Marquette University Law School poll from August found that 55% of Democrats intended to vote by mail, compared to just 15% of Republicans.

Many states, including battlegrounds like North Carolina and Pennsylvania, will process and count mail ballots that are postmarked by the state election deadlines but arrive after Election Day. Even small numbers of legitimate ballots can make a difference in determining a result. In 2000, the Presidential race in Florida ended up hinging on 537 votes.

Pandemic or no pandemic, the vote counts on Election Night are always unofficial. Even in a normal election year, states do not immediately certify results. Election officials spend days and weeks counting and certifying every single ballot. In past cycles, organizations like the Associated Press, which has been calling races for over 150 years, have been able to determine a projected winner based on the votes that are already in. But this year, with more voters than ever expected to cast their ballots by mail, which typically take longer to process and tabulate, it was widely expected that a winner would not be immediately apparent.

“The process of getting the results is going to take a little longer than usual because of the increase in absentee ballots,” Wisconsin Attorney General Josh Kaul, a Democrat, told reporters on Monday. “If counting those ballots goes early into the morning after election day and even a day or two after election day, it’s not a sign anything is going wrong with the process. It’s a sign the process is working.”

The President Has No Legal Authority to Declare Himself Winner

Each state faces a deadline, set by its own legislature, by which its officials must finish tallying votes and certifying the results. After the results are certified, states present a slate of “electors,” individuals representing the state at the Electoral College.

According to the U.S. Code, states should finish tallying their results and resolve any court contests by Dec. 8, or risk Congress rejecting their nominated electoral college representatives. One week later, on December 14, the states’ Electoral College members meet to formally cast their votes.

On January 6, the newly-sworn in Congress affirms the results and hands them to the Vice President, who pronounces them official. The President of the United States has no role in this process, and no legal authority to declare the winner of any state election.

There are certain, rare situations, in which this process is thrown into flux. But the system is built for those as well. “Even in the worst case scenarios that can cause great alarm there are rules and procedures that can and must govern what happens,” says Vanita Gupta, president of the Leadership Conference on Civil and Human Rights and a former Obama Administration official.

“Neither the president nor Joe Biden can determine the outcome of the election,” Gupta added. “The voters do.”

Write to Tessa Berenson at tessa.berenson@time.com, Abby Vesoulis at abby.vesoulis@time.com and Alana Abramson at Alana.Abramson@time.com. 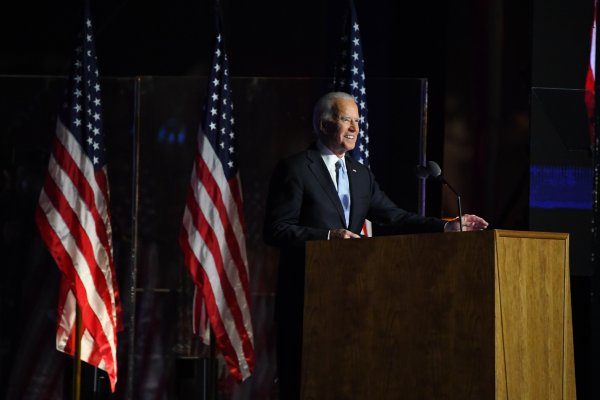 Biden: 'This Is the Time to Heal in America'
Next Up: Editor's Pick