Shakira: The Parents of 545 Children Are Missing, and the Silence Is Blaring

I am the daughter of a New Yorker who was born to Lebanese immigrants amidst the great economic depression of the 1930s, immigrants who, thanks to their entrée into the United States, were able to build a solid foundation for themselves and their family before they finally settled in Colombia, where I was born and grew up.

Colombia is one of the most beautiful and diverse countries in the world but rife with inequality and lack of social mobility. America, in contrast, seemed to me a place that was always held up as a paragon of equal opportunity and limitless aspirations, where anyone could succeed.

How, then, could a nation built on the shoulders of immigrants, one that purports to hold family values in such high regard, have such unimaginably cruel immigration policies? What rationale could justify separating children from their families, with no intention of ever reuniting them, when the U.S. has prided itself on being a beacon of hope for those who come from places where not even basic needs or safety are a guarantee?

In “the land of the free,” there are 545 children now stuck in no-man’s-land, at risk of growing up without a mom or dad, 545 children who have to go to sleep without someone to reassure them that they aren’t in danger at any given moment, 545 children who can’t hug, laugh or have any contact with the people they love most.

It’s estimated that 60 of these children were under the age of 5 when they were first separated from their parents. As a mother, I think about my youngest son, who is now 5. I think about how he cries for me when he skins his knee, and the pain I feel if I am not there to comfort him. Who answers the cries of the children left without their parents? I cannot imagine the pain I would feel not knowing where my son was and whether he was safe, or the fear that these children must endure and the emotional scarring that is inflicted upon them.

Policies like family separation are born out of cruelty. When I read about the allegations of women undergoing forced hysterectomies, asylum seekers reportedly signing their own deportation orders under threat of harm, and parents having their crying children ripped from their arms, it shows how policies like these can strip people of even the most basic sense of humanity. This policy is not about protecting people or making communities safer. The unspeakable tragedy taking place at America’s southern border is about hate and the denial of basic human rights.

Every child deserves to have their basic needs met, to receive an education and to be surrounded by caring and nurturing adults. The trauma that these children are experiencing every second they remain separated from their parents will stay with them for life. And according to nearly 7,700 mental-health professionals who signed a petition urging President Donald Trump to end family separation, this policy shows a complete disregard for everything we know about child development, the brain and trauma.

Some might argue that the parents put their children in this situation, but many families coming to the U.S. are fleeing violence, poverty, persecution or climate catastrophes in their home countries. The decision to leave home is not an easy one, as anyone who has left home can attest. It’s telling that some of the parents who have been located made the near impossible choice to keep their children with friends or family members in the U.S. “due to fear of what will happen to their children” if they return home.

This is not about politics. There is simply no justification for the harm caused to these innocent children, and the people responsible for this cruel policy must be held accountable.

If there was ever a time to show greater compassion to the immigrants in our communities, it’s right now. During a pandemic that has already taken so much from us, immigrants are often the ones who have been on the frontlines, performing the essential work to keep us healthy and safe—often in dangerous conditions and for wages that are far too low. The last thing they deserve is to have their families broken apart.

Every effort should be put toward finding and reuniting the families that have been ripped apart. I’m grateful to the ACLU lawyers who have been working tirelessly to locate these parents. To prevent this from happening again, we need a just and humane immigration system that honors the commitment to asylum seekers and recognizes the basic humanity of each and every one of us.

Speaking up isn’t always easy, especially when one is not an American citizen and can be perceived as an outsider commenting on domestic policies. However, the United States’ decisions affect us all, even more so when children’s lives are on the line. So it becomes a common and urgent responsibility to share the stories of these families, no matter where they are from, to keep their names in the news, and to bring them back together. Now is not the time to be silent. 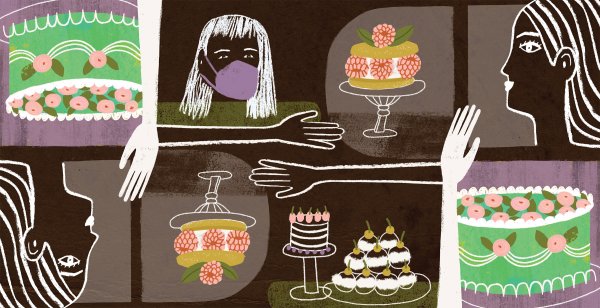 Cake Isn't Just Cake During a Pandemic
Next Up: Editor's Pick