In Last-Minute Swing Through Key States, DHS and ICE Are Making the Case for Donald Trump’s Re-Election

In the final weeks leading up to the 2020 election, the Department of Homeland Security and U.S. Immigration and Customs Enforcement have launched a highly unusual publicity blitz to spotlight immigration enforcement actions in key battleground states where President Donald Trump is trailing his opponent Joe Biden in the polls.

As part of this push, top DHS and ICE leaders have traveled across the country to hold at least four press conferences this month in Pennsylvania, Arizona and Minnesota, shadowing the path of Trump’s rallies as he makes a last-minute appeal to voters there. These public announcements by senior leaders ahead of the election, which former officials tell TIME are abnormal, if not unprecedented, have been held to publicize mostly routine immigration enforcement operations that would usually have been revealed with little fanfare.

Instead, DHS and ICE officials have used them as a platform to aggressively make the case for the president’s immigration policies, often taking on a markedly Trumpian tone and echoing parts of his stump speech. At multiple events, Acting Homeland Security Secretary Chad Wolf and his deputy Ken Cuccinelli have talked about immigrants taking American jobs, blasted Democrat-run sanctuary cities, touted “America First” and warned of “evil people who seek to travel to the United States with the intent of harming and killing Americans.”

In Phoenix last week, Wolf warned that there would be a surge in migration and an “unimaginable public health crisis” at the southern border if Trump were to lose the election — a series of nakedly political statements that stunned many former officials.

“The rhetoric that’s come out of Wolf and Cuccinelli is appearing to be a propaganda arm of the White House,” Dave Lapan, a retired Marine Corps colonel who served as DHS spokesman during the Trump Administration under then-Secretary John Kelly, tells TIME. As a result, he says, DHS “is not being seen as a trustworthy law enforcement agency, but an extension of the president’s re-election campaign.” Wolf’s comments in Phoenix in particular “really crossed a line into electioneering,” Lapan says.

On Oct. 21, Cuccinelli, the DHS acting deputy secretary, traveled to Pittsburgh to announce the arrest of fifteen foreign students for allegedly using a student work visa program to remain in the U.S. fraudulently. While he went to Pennsylvania to make the announcement — which would typically have warranted a simple press release, not travel by a senior official— the arrests were made in Florida, Massachusetts, New Jersey, Texas, Tennessee and Washington D.C. as well as in that state.

The arrests were part of “Operation OPTical Illusion,” a crackdown on the federal Optional Tactical Training program, which allows international students to work in their field of study while on a U.S. student visa. Cuccinelli directly tied this immigration enforcement action to Trump’s agenda, saying the arrests “will open up those jobs for American workers” and emphasizing that this “has been a very high priority for this President.”

It was the latest in a series of publicity moves by DHS to amplify the Trump campaign’s immigration message in Pennsylvania, where the president is trailing Biden by 6 points, according to a recent USA Today/Suffolk University poll. The previous week, Wolf had been in Philadelphia to tout the arrests of 170 immigrants in sanctuary cities across the country in “Operation Rise” – or, as a former DHS official jokingly referred to it to TIME, “Operation Rise in the Polls.”

Earlier in October, ICE put up bold black and red billboards in several parts of Pennsylvania, featuring the faces of six immigrants and their charges of burglary, robbery, and assault in big lettering. The agency described them as “at-large immigration violators who may pose a public safety threat” and said the campaign was meant to “educate the public about the dangers of non-cooperation policies.”

Former federal and state officials disagreed. “These billboards are clearly intended to fuel anti-immigrant fervor one month before the election,” says Mike Dunn, a spokesperson for the city of Philadelphia, which has sanctuary policies that Trump has long denounced in place. Former immigration officials and experts called it a blatant ploy to boost Trump’s hardline immigration message. “How does that advance their mission?” John Sandweg, a former acting ICE director, told CNN. “Running billboards — it’s political messaging.”

On Wednesday, five days before Nov. 3, ICE acting director Tony Pham flew to Minnesota, another battleground state, to announce 104 immigration arrests across the country. The arrests were part of a relatively standard operation that led longtime DHS watchers to note that “ICE’s choice of location is the obvious eyebrow-raiser,” in the words of Aaron Reichlin-Melnick, an attorney with the American Immigration Council. Neither agency responded to TIME’s request for comment.

Getting the message out

The politically significant locations of these press conferences, and the presence of senior leadership, means each event has been covered by local news and circulated on social media, likely reaching their intended in-state audience and beyond. “You think a Biden/Harris administration would give a fig about this type of fraud?” a pro-Trump group called Kentucky Against Illegal Immigration posted on Facebook, sharing the ICE release from the Pittsburgh announcement.

The official DHS social media accounts have also echoed Trump’s campaign message, tweeting that “the Trump administration is building [a] new wall and doing so faster than ever before” and “the Trump admin is putting America first by protecting American workers.” On Thursday, Wolf posted an almost 2-minute video about news media raising questions about Trump’s promised border wall in what was effectively a campaign ad, with the message: “They said it couldn’t be done…They were wrong. 400 times and counting.”

The same day, the government watchdog group American Oversight sent a letter to the U.S. Special Counsel and DHS Inspector General asking for an investigation into whether Wolf, Cuccinelli, Pham or other senior officials had ordered any department employees to act in violation of the Hatch Act, which prohibits federal employees from engaging in political campaigning.

“DHS is showing us a textbook example of why we have a federal law against government officials using their positions to support a political campaign,” Austin Evers, the group’s executive director, tells TIME. “Top DHS officials are acting more like campaign surrogates than public servants, and they need to be held accountable.”

After announcing in March that it would temporarily halt some enforcement operations during the pandemic, except for those involving foreign nationals who have committed crimes or pose a threat to public safety, ICE has ramped arrests and deportations back up in the months before the election, despite the obvious health risks.

“I am deeply disturbed that ICE is spending government dollars and putting lives at risk in furtherance of what is described as a political messaging campaign,” Rep. Zoe Lofgren, a California Democrat, wrote in a letter to Pham in early October.

Immigration lawyers and advocates have raised concerns the agency has also been timing other law enforcement actions for political purposes. In September, ICE announced that 19 non-citizens in North Carolina had been charged with illegally voting in the 2016 election. ICE had made an almost identical announcement in August 2018, also charging a different group of 19 non-citizens with voter fraud, which carries a penalty of six years in federal prison and a $350,000 fine.

That year, ICE announced the indictments at the same time that North Carolina Republicans were publicizing claims of voter fraud in order to push stricter voter ID laws ahead of the 2018 midterms. This time around, the ICE announcement about the charges — which came more than three years after the investigation started — were also “highly suspect, and likely to be politically driven,” says Helen Parsonage, an attorney who represents five of the non-citizens.

“Nothing was done with the cases until right before a presidential election,” she tells TIME. “The vast majority of these cases involve long-time permanent residents with no criminal record, some of them elderly.”

While Trump’s 2016 rallies were often filled with vivid accounts of immigrant crime, “build the wall” chants and infamous readings of a poem about a snake to illustrate the threat posed by immigrants and refugees, it’s a theme he’s rarely touched on in his 2020 rallies. Immigration was the fourth most mentioned issue in the Trump campaign’s television ads in 2016, but it barely made it into the top 10 this election cycle, according to an analysis by the Wall Street Journal.

This year, it seems, Trump doesn’t have to beat that drum himself. DHS and ICE are doing it for him. 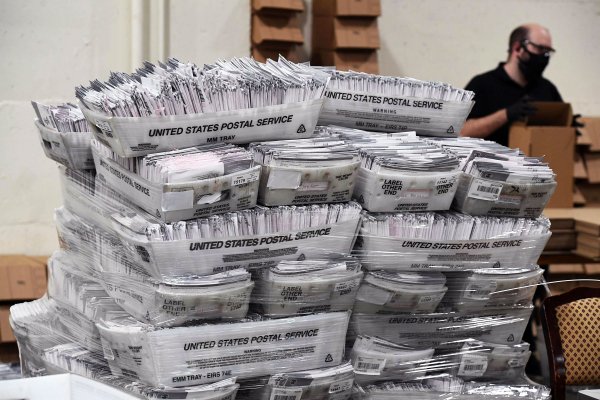