Much of What We Thought About Neanderthals Was Wrong. Here’s Why That Matters

The Neanderthals never really had a chance. I’m not talking about 40,000 years ago, when we see their remains disappear from the fossil record, but about their rediscovery many millennia later, at a moment when a very particular cultural hierarchy was the order of the day. That another sort of human entirely had once walked the Earth was a deeply shocking fact, one among a volley of disturbing threats lobbed by science against the notion that the cosmos centered on us, Homo sapiens. From 1856—the year they were first noticed—until the present day, Neanderthals have consistently been framed in opposition to us, not as fellow travelers along evolution’s swift and mighty cataract.

But archaeology as a discipline wasn’t paying attention to the role we wished to cast Neanderthals in. Instead, it was busily learning how to do more than simply collect beautiful stony trinkets and arrange them in shape order. Now, we can zoom out from the micro-layers of a single hearth whose embers last glowed in Iberia 90,000 years ago, to the secrets of continental-scale population movements buried in DNA from a Neanderthal woman living around the same time, thousands of miles east in Siberia. Today’s vision of these ancient relations is as distant from old views of Neanderthals—unintelligent cave thugs, the losers of our family tree—as modern astronomy is from the idea of a universe bounded by the Milky Way. And what 21st century archaeology paints is a truly compelling portrait, of another kind of human, traveling their own path.

Particularly in the last three decades, many conventional theories about Neanderthals have been exploded. For example, for much of the past 160 years, it was believed they were specifically adapted to extreme cold; now we know that their environmental range was far broader, and they didn’t really enjoy hyper-frigid conditions. This variety of environments brought with it a massive diversity in ways to make a living. Neanderthals were top hunters who took on prey ranging from true mega-fauna like mammoths and woolly rhinos to small game. Whether hunting or foraging, a deep knowledge of the world guided them—they knew the best way to take apart a reindeer, how to roast a tortoise or where to gather water-lily roots.

Neanderthals were also keenly concerned with the characteristics of materials—most obviously rock. Stone tools connected every aspect of life. They sliced, chopped and scraped the food they ate, the clothing they wore, the fuel that kept the darkness at bay. Patterns from many hundreds of archaeological sites show they understood how different rock types required varying approaches for knapping, and were flexible enough to alter and combine techniques for acquiring the sorts of flakes—and sometimes blades and points—they were after. Study of other materials, such as wood, reveals the same impression of knowledgeable craft. Nor did they use that knowledge for tools alone. While standards of proof are justifiably high (although often more stringent than we demand from early H. sapiens contexts), there do seem to be some striking hints that their material engagements went beyond the functional. For example, a fossil shell from an Italian site dating around 55,000 years ago must have been originally found by a Neanderthal some 60 miles away from the site, and its outer surface bears red pigment, itself sourced from 25 miles away.

Recent discoveries even challenged the Neanderthal “fact” about which we were most certain: their extinction. That changed when in 2010 the first nuclear genome revealed that, rather than their being distant cousins we’d shoved aside by 40,000 years ago, ancient interbreeding had left a genetic Neanderthal legacy in most living people. Of course, it’s obvious that Neanderthals aren’t “still here” in a full sense; since we still look like ourselves, there cannot have been a total Borg-style assimilation. But neither are they totally extinguished.

Indeed, the story we like to tell ourselves about our success and their failure is looking less clear-cut in other ways. It now seems that the span of time during which early H. sapiens dispersed out of Africa is far greater than once believed, reaching back before 150,000 years ago and featuring many phases of baby-making. Yet those early explorers of Eurasia vanished into evolutionary oblivion, leaving virtually no surviving DNA lineages visible in people today, and were replaced themselves by multiple waves of later populations. Early Homo sapiens, in other words, weren’t fundamentally better at surviving than Neanderthals were.

What does this new view of Neanderthals teach us? In many ways they were super resilient. We know they were flexible, adaptable survivors who weathered repeated and extreme climate change. Around 120,000 years ago, this even included a world warmer than today, by some 2–4°C and with sea-levels up to 8 meters higher—precisely where we are headed in the next few centuries if we don’t make a drastic change now.

But something did shift during their final ten millennia, between 50-40,000 years ago. Rather than a single cause for their dying out, it’s looking as if Neanderthals were caught in a many-angled vise. Intensifying climate chaos was part of that. And there probably was something qualitatively different in their H. sapiens contemporaries, potentially better hunting technologies and greater social connectivity, which crowded them out. Perhaps, even as the last hybrid babies were being conceived, something else more dangerous was exchanged; finishing writing my book about Neanderthals in spring 2020 made it impossible to disregard the possibility that our species may have brought some deadly pathogen into the equation. Or it might all however have come down to nothing more dramatic than a slow fading away, and whatever the details, the Neanderthals’ end undoubtedly unfolded in different ways across their huge geographic realm, from France to Central Asia and beyond.

By 30,000 years ago, there were no more Neanderthals. Nor were there any of the other ancient hominin species who had populated Eurasia. From the Cape of Good Hope to the Blue Mountains of Australia, our H. sapiens ancestors were alone on Earth. This point has typically been framed as a victory of our species, a vision in which we are the successful explorers or conquerors, but maybe it was the opposite. We once witnessed—perhaps caused—the elimination of our closest relations. Now, tens of millennia later, we are waking up to what else we’re on the brink of losing. For the sake of both the future and past generations we bear within us, let’s learn a new way to be resilient while treading lightly—a new path to being human. 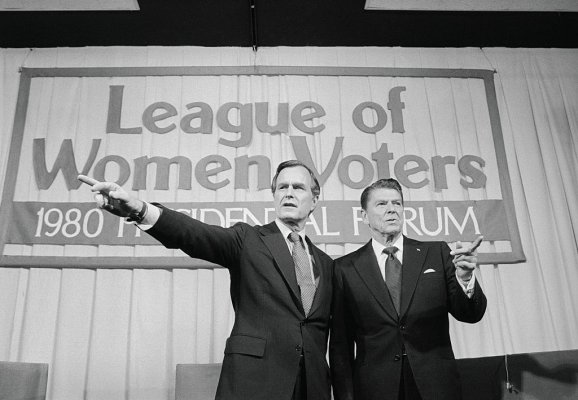 The Real Reason Behind the Gender Gap in American Politics
Next Up: Editor's Pick