Joe Biden did nothing to conceal how little respect he holds for his rival, Donald Trump, during the final presidential debate on Thursday. Gesturing on stage in Nashville, the former Vice President told his limited in-person audience — and the millions more watching at home — that the incumbent President is little more than a walking embodiment of racism and extremism. “Come on,” Biden said, the contempt audible in his voice. “This guy is a dog whistle about as big as a foghorn.”

But here’s the thing about dog whistles: they only reach certain sets of ears. For everyone else, the vibrations whiz past without registering. And, perhaps by accident, Biden publicly diagnosed one of the biggest strengths and weaknesses of Trump’s performance during their last scheduled face-to-face meeting: if you were an average voter tuning in for the first time, you had no idea what Trump was talking about during some of their more heated exchanges.

The format of modern debates offer very few opportunities to have an expanded answer on any topic. Last night, the longest any candidate was ever supposed to take was two minutes to respond to each of six main questions. Trump often used his two minutes to float unproven allegations, personal attacks, political shorthand and dubious innuendo. When debate moderator Kristen Welker asked Trump if he understands why some Black families fear for their children’s safety, Trump wound himself into knots to talk instead about Biden’s 1994 crime bill and a “laptop from hell,” referring to a computer allegedly containing incriminating emails from Joe Biden’s son Hunter, which national security experts have widely said bears all the hallmarks Russian disinformation.

What does any of that have to do with Black families’ security? To the uninitiated, it is a bunch of words strung together like a late-night presidential tweet storm. To Trump’s base — and viewers of Fox News in particular — it was a bunch of shorthand that summarized Trump’s closing arguments in his race against Biden: that the former Vice President and his family are greedy criminals who traded U.S. policy for personal wealth and there’s a secret laptop that proves it all.

Before we go on, it must be said: Senate Republicans spent months looking into allegations about Biden and his brood. When their report was released six weeks before Election Day, it contained no evidence Biden ever bent U.S. policy to help his son or ever personally profited. Instead, Democrats noted that much of the allegation overlapped neatly with a disinformation campaign led by a Urkainian lawmaker with close ties to Moscow. Trump’s own Treasury Department had been so aghast at the disinformation campaign that it imposed sanctions on involved individuals and warned Americans about the spread of false information.

None of that has stopped Trump from digging in on the allegations or his friends in conservative media for promoting them. In the hours before last night’s debate, a former Hunter Biden business associate made his way into the room where the White House band of reporters was standing by for the debate. Over the course of seven minutes, Tony Bobulinski read a statement that seemed to suggest Joe Biden wasn’t being honest about his involvement in his son’s business, citing his own meeting with Joe and Hunter Biden in May of 2017 about a potential — but unrealized — Chinese partnership. (Joe Biden left the White House on Jan. 20, 2017.)

Writing about the alleged synergy, The Wall Street Journal reached this conclusion: “The venture — set up in 2017 after Mr. Biden left the vice presidency and before his presidential campaign — never received proposed funds from the Chinese company or completed any deals, according to people familiar with the matter. Corporate records reviewed by The Wall Street Journal show no role for Joe Biden.”

Trump did his level best to force Biden to talk about the latest allegations involving the laptop that the NY Post reported on last week and the new Chinese deal. But as they had when they last debated and Trump kept chewing Biden on Hunter Biden’s work in Ukraine, the details of Trump’s accusations were so muddled in the moment that most Americans could only surmise that there was something going on that has nothing to do with rebuilding the economy or curing the coronavirus. The dog whistle was a staccato, not a melody.

For those steeped in the Biden-is-corrupt mythology, Trump’s message came through loud and clear. He also hit other notes that would be familiar to his base throughout the evening. When Trump was asked about his own foriegn financial obligations, Trump turned the answer into another ding on Hunter Biden, who has been open about his struggles with addiction: “His son didn’t have a job for a long time period, … no longer in the military service. I won’t get into that.” It was a dirty way to remind Trump’s loyal supporters that Hunter Biden was discharged from the Navy after testing positive for cocaine.

And when asked about his still-unreleased tax filings, Trump took the chance to take a potshot at Joe Biden’s brother, Jim Biden: “Your brother made money in Iraq. Millions of dollars.” He then implied — again, without evidence — that his relatives were kicking money back to Joe Biden. “They say you get some of it. And you do live very well. You have houses all over the place. You live very well,” Trump said.

For anyone who closely followed the years-long scrutiny that befell the Clinton Foundation and Trump’s innuendo-based campaign against it, there were disturbing echoes. Trump — who has not divested from his own businesses and continues to own a company that does business abroad — alleging foreign entanglements against an out-of-power Vice President and his family just seemed an unnecessary moment to remind everyone that Trump continues to break norms and conduct business as the head of an multinational corporation.

What’s unclear is how much any of this matters in Trump’s fight to bring in more votes on Nov. 3. He is trailing Biden in state and national polls, his fundraising is at all-time lows and he is down to 10 days to close the gap. Trump’s attacks on his rival’s family seem to be doing nothing to win back the suburban voters who have been abandoning Trump, according to national and state-level polls. His racially-tinged attacks on cities and talk about criminal justice reform as an issue that is only important to Black voters aren’t building him any sort of coalition. And where mainstream Republicans could credit Trump with an economy that was doing well for them, Main Streets are now shuttered.

For a segment of the electorate, this sort of drive-by sucker-punch of Biden makes sense and validates their distrust of Biden, a career politician and the ultimate Washington insider. For Biden’s supporters, this is crazy conspiracy ground that should be treated like bunk. And for Americans simply worried about paying rent and staying alive these days, this talk of China, Ukraine and cocaine was just garbage.

In the Trump echo chamber, the President’s message was duly passed on. Fox’s Laura Ingraham said after the debate voters need to educate themselves about Hunter Biden “even if the media is trying to hide the ball.” Trump campaign adviser Steve Cortes predicted the “corporate media” wouldn’t touch the story. Other guests that appeared in the network’s post-debate analysis all seemed well versed in the Trump-endorsed version of Hunter Biden’s admittedly complicated existence.

After the debate, members of the Biden campaign stood by their boss’ assessment of Trump’s use of coded language meant to trigger only those trained to hear it. “He talked about everything except the job he’s done for the last four years,” Biden senior adviser Symone Sanders told reporters.

With 10 days to go, that may well be Trump’s strategy. 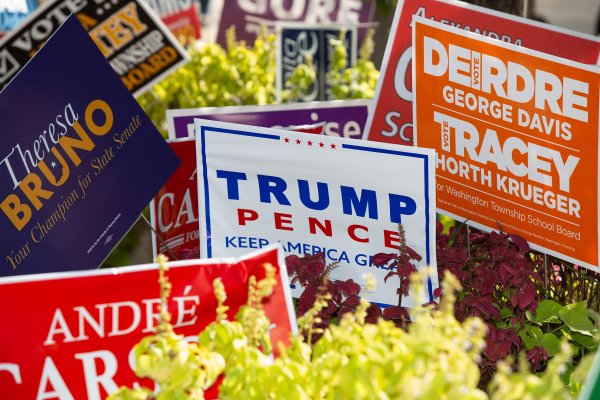 Why National Parties Are Spending Millions on State Races
Next Up: Editor's Pick