Activists of the newly-formed Pakistan Democratic Movement (PDM), an opposition alliance of 11 parties, wave parties flags during the first public rally in the eastern city of Gujranwala on Oct. 16, 2020.
Arif Ali—AFP/Getty Images
Ideas
By Ian Bremmer
Bremmer is a foreign affairs columnist and editor-at-large at TIME. He is the president of Eurasia Group, a political-risk consultancy, and GZERO Media, a company dedicated to providing intelligent and engaging coverage of international affairs. He teaches applied geopolitics at Columbia University’s School of International and Public Affairs and his most recent book is Us vs. Them: The Failure of Globalism.

For a country that continues to struggle on the economic front, Pakistan has handled Covid-19 admirably… making it one of the most unlikely COVID-19 success stories to date. But successfully dealing with a pandemic isn’t a cure for Pakistan’s democracy, which has been ailing for some time now. And domestic struggle reached a new fever pitch in recent days—here’s what you need to know about Pakistani politics as head towards 2021.

Pakistan’s democracy ranks among the world’s most convoluted. While ostensibly a parliamentary democracy—with political power residing in the prime minister and the members of parliament elected to office—in reality it is a hybrid political system, with the country’s military calling many of the political shots. The current prime minister, former cricket star Imran Khan, was elected in 2018, but his election was aided by the military. And during Khan’s tenure, many prominent retired military officials have assumed critical roles in his government.

This is nothing new for Pakistani politics, a country where the military has backed a succession of prime ministers, or sometimes even taken power directly themselves. This has given way to a well-known dance among the country’s most ambitious politicians; aspiring PMs are happy to play ball with the army as they are ascending the political ladder, but once they reach the top they try to keep the army at arm’s length for fear of having their political power diluted. That’s exactly what happened with Khan’s predecessor, Nawaz Sharif, who following the release of the Panama Papers was barred from political office by the country’s judiciary, and later jailed on corruption charges, rulings that Sharif claims were due to the military’s influence.

Which brings us to the last week. In early October, 11 of the country’s opposition parties held their first unity rally as the Pakistan Democratic Movement (PDM), banding together to take on Khan’s Pakistan Tehreek-e-Insaf party. While the attempt to consolidate opposition forces has been in the works for some time now, the country’s two largest opposition parties had been lukewarm on joining. But political calculations have changed in recent months as the army has upped the pressure on opposition groups to help the Khan government roll back the 18th amendment that decentralized political power in the country (and by extension, loosened the army’s hold on the political process), railroaded the opposition to pass legislation through parliament, and filed corruption cases against key opposition leaders, including Sharif’s daughter Maryam. Meanwhile, journalists and opposition leaders continue to be jailed as the country marches towards Senate elections in March. The Senate, where half the seats will be up for grabs, is the last legislative institution not controlled by Khan. All these factors have combined to convince Pakistan’s opposition parties that a last-ditch effort is now necessary to save what’s left of the country’s democracy.

Dialing in to that kickoff rally on Friday was Sharif, who is currently abroad in London for health-related reasons. In a fiery speech, Sharif called out Chief of Army Staff General Qamar Bajwa and Director General of the Inter-Services Intelligence Lt. Gen. Faiz Hameed for pushing fake conspiracy charges against opposition leaders and accused them directly of conspiring to remove him from office back in 2017 and engineering Khan’s 2018 election. While his revelations were hardly shocking for anyone following Pakistani politics, it was still a seismic moment for the country’s politics, as the army’s role has never been so blatantly stated and challenged. Unsurprisingly, the military did not take it well.

While the army tried to make sure that the video of Sharif’s speech didn’t get a wide viewing audience, it quickly got out on social media and spread like wildfire.

This story is more complicated than pro-democracy vs. anti-democracy forces. Sharif is a product of the same political system that Khan is, making him an imperfect vessel for a pro-democracy message; plenty contend that Sharif is just angry for being ousted so unceremoniously, and has a personal vendetta against Khan for making his life complicated when he was premier. Back in 2014, Chinese President Xi Jinping was traveling to Pakistan to launch the China-Pakistan Economic Corridor; as an opposition leader at the time, Khan organized massive anti-corruption protests against Sharif, resulting in Xi calling off his visit, and forcing Sharif to turn to the army to get them to call Khan off. By doing so, he was required to cede foreign policy decisions to the generals.

In other words, there’s no shortage of personal drama going on here in addition to the politics. And while the Khan government is enjoying a boost following the country’s impressive response to COVID-19—70 percent of Pakistanis believe the government handled the pandemic well—the continued corruption scandals, economic woes and worsening inflation afflicting Pakistan at present all pose serious threat to the Khan government’s continued legitimacy.

For now, the question is whether this opposition movement will be able to generate enough momentum to force the military to abandon Khan. There are some elements within the opposition that want to make a deal with the military (in hopes it will bolster their political fortunes in the future), though Sharif has made it clear he is not interested. While the military is now in an uncomfortable position, with the spotlight shining on their role in Pakistan’s politics, they are unlikely to move on from Khan. Furthermore, Bajwa is operating from a position of strength here; he is still in the first year of an extension granted to him by the very parties that now protest against him.

There’s already another large-scale opposition rally planned for this weekend and more to come after that, with the goal of sustaining the movement till those Senate elections. If there are continued broad crackdowns and arrests that generate support for opposition, the army might be forced to compromise down the line. Not that it wants to—given that Sharif specifically called out Bajwa by name in his tirade, the army is unlikely to let things go. But neither is the opposition, which sees the next few months as its best and last attempt to preserve Pakistani democracy. Expect more rallies, and more repressive crackdowns for the time being—Pakistan is heading into a volatile next few months. Silver lining? Little of that volatility has to do with the pandemic.

The One Key Stat That Explains It:

And you thought Americans disagreed on critical issues. 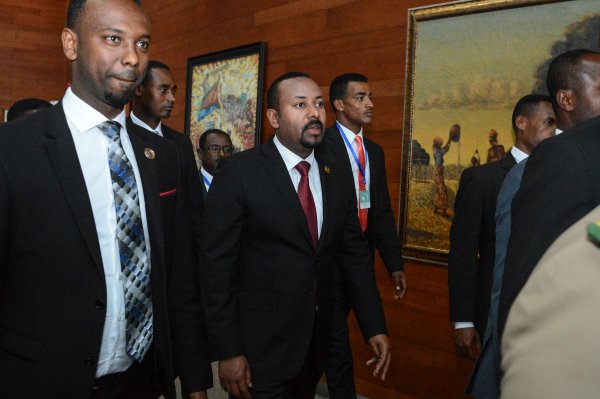 What Happens Next in Ethiopia's Political Turmoil
Next Up: Editor's Pick