‘We Are Able to Get Things Done.’ Women Are at the Forefront of Nigeria’s Police Brutality Protests

A demonstrator stands atop a vehicle and shouts slogans as others carry banners while blocking a road leading to the airport in Lagos on Oct. 12, 2020.
Seun Sanni—Reuters
By Suyin Haynes

Before Tuesday, the mood among #endSARS protesters in Lagos was optimistic. For more than two weeks, protesters across Nigeria have taken to the streets calling for an end to police brutality and the dissolution of the Special Anti-Robbery Squad (or SARS) police unit. But after violence on Tuesday night, which rights groups say left 12 people dead, many are afraid. “A lot of us at the forefront are terrified for our lives. We’ve never lived through anything like this in Lagos. We watched people get killed yesterday on social media,” says Jola Ayeye, a 28-year-old screenwriter based in Lagos.

An on-the-ground investigation by Amnesty International confirmed Wednesday that the Nigerian army and police killed at least 12 peaceful protesters in two Lagos suburbs the previous evening, as thousands of people protested against police brutality as part of the #EndSARS movement. Witnesses said several unarmed, peaceful protesters were shot dead at Lekki toll gate in Lagos, Nigeria on Oct. 20, as video footage emerged on social media appearing to show the Nigerian military firing live rounds at a crowd protesting as part of the #endSARS movement. Eyewitnesses at a separate protest site in Alausa told Amnesty International that they were attacked by a team of soldiers and policemen, leaving at least two people dead and one critically injured. At least 56 people have died across the country since the nationwide protests began on Oct. 8, with about 38 killed on Tuesday alone, according to Amnesty International.

The SARS unit has been the target of protests since 2017, but protesters say this latest wave is different than what came before. The movement is leaderless but driven by a younger generation of Nigerians, tired of being profiled by SARS operatives, who often carry out violent ambushes in plain clothes with little impunity. An Amnesty International report earlier this year documented at least 82 cases of torture, ill treatment and extra-judicial execution by SARS between January 2017 and May 2020, mostly targeting young men between the ages of 18 and 35. Although the Nigerian government announced that the SARS unit would be disbanded on Oct. 11, protesters are skeptical that will lead to real change—authorities have made and broken several promises regarding the disbandment and reforms of SARS over the past four years.

Nigerian DJ Obianuju Catherine Udeh, better known as DJ Switch, livestreamed on Instagram from Lekki on Tuesday evening and filmed the army shooting rounds of live fire at crowds. “Every Nigerian, especially [those in] the diaspora who had no other way to witness this, owes this woman everything,” says London-based Onis Chukwueke-Uba, 25, who was one of more than 150,000 Instagram users watching DJ Switch’s live video as events unfolded in Lagos.

DJ Switch is one of many women on the frontlines of these protests, which began in early October and are among the most widespread wave of protests in Nigeria campaigning against police brutality. Ayeye, and her podcast co-host Feyikemi Abudu, both based in Lagos, have also become a core part of Nigeria’s protest movement against police brutality, helping spread information on Twitter, raising and distributing funds for protesters and organizing security, medical assistance and legal aid. “This is the first time, at least in my lifetime here, that people are saying ‘enough is enough’,” says 27-year-old Abudu, who currently runs a start-up. She began fundraising a few days after the nationwide protests started on Oct. 8, wanting to provide breakfast for protesters in Lagos.

Read More: “I Really Thought My Life Was Going to End.’ Inside the Protests Taking on Police Brutality in Nigeria

“Young women are having a critical role in sustaining this movement, and young people across Nigeria feel like leaders in their own right,” says Oluwaseun Ayodeji Osowobi, a womens’ rights activist who was on last year’s TIME 100 Next list. Osowobi’s organization, Stand to End Rape, has been providing mental health support for protesters on the front line. As a service-provider helping young women survivors recover from gender-based violence, she knows first-hand the trauma SARS has inflicted on Nigeria’s young people. “Nobody is really safe. I know mothers who have lost their children, I know women who have been raped by these people, I know those who have died, so I have a responsibility too to make sure I fight for the rights of young Nigerians,” she says.

Abudu and Ayeye recall speaking about their frustrations with SARS on their podcast in 2017, during the first wave of campaigns against the unit. They didn’t imagine that three years later, they would be helping organize a support system for protesters, fielding calls in the middle of the night, and directing participants to safety via social media. “We joke that Feyikemi has built a state in ten days,” says Ayeye, referring to volunteers that have come together to organize food, medical assistance and legal aid to support protesters. “The organization and bravery of women really underpins this whole movement,” she says.

Nigeria has a history of women organizing protests. Aisha Yesufu, 46, was a co-organizer of the Bring Back Our Girls movement that called for the safe return of the Chibok schoolgirls kidnapped by Boko Haram in 2014. She says she is proud of the young women who have mobilized during this protest movement. “The Bring Back Our Girls movement was a protest of empathy. #endSARS is more about survival. These are young men and women who are being killed by those who are supposed to protect them, and who are fighting for their life,” says Yesufu, whose photo with her fist raised at the forefront of protests in Abuja on Oct. 10 has been shared widely as a symbol of the protests.

Both Abudu and Ayeye, as well as Osowobi, are part of Feminist Coalition, a collective of Nigerian women who formed in July 2020 to work around feminist causes and the advancement of women’s rights in Nigeria. The group has been instrumental in fundraising to support the protesters on the ground through Bitcoin donations, and has issued daily reports of the money they’ve raised and distributed to ensure accountability. As of Oct. 19, the group had raised more than 74 million naira, equivalent to almost $200,000.

All three women are hoping that their activities during the protests could improve things for women in the country more broadly, as well greater equality for other marginalized groups, including LGBTQ people who have experienced hostility and homophobia during protests. “It is incredible for me because especially in this country, where a lot of people have these backwards views about women in leadership positions, I’m hoping this will allow people to see that you need women at the top, at every level of society,” Abudu says. “Simply, we are able to get things done.”

All are reeling from the shock of the deaths at Lekki and Alausa on Tuesday night. Yesufu says she is numb, and Ayeye and Abudu say they are afraid for the dead and injured protesters in their city. The Feminist Coalition is now helping support injured protesters, as well as encouraging others to stay safe and stay at home.

There is also fear among protesters that the government will try to change the narrative of events. Witnesses told Amnesty International that shortly before the shootings, CCTV cameras at the Lekki toll gate were removed by government officials and the electricity was cut in an attempt to hide evidence. Abudu and others have been encouraging protesters on social media to document what happened to them to ensure the truth about what happened at Lekki is told. “Something has to give,” Ayeye said via WhatsApp on Wednesday. “We cannot keep living like this.” 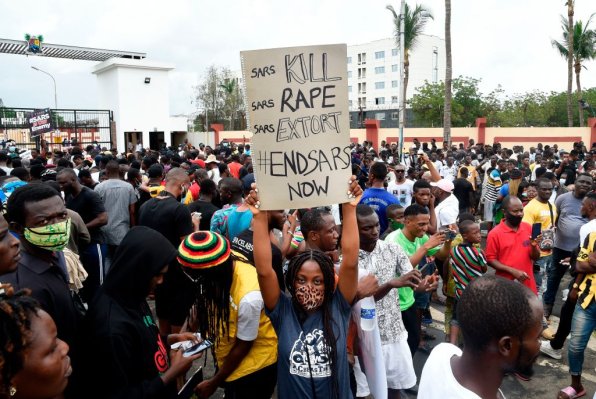 What to Know About Shooting of Protesters in Nigeria
Next Up: Editor's Pick