It’s Hard to Enforce Pandemic Health Rules on Halloween. Just Look at What Happened in 1918

The COVID-19 pandemic has already played out like a horror movie script, and yet some Americans are still determined to celebrate Halloween on Oct. 31—trading their normal face masks for costume masks, and planning socially distant festivities.

It will no doubt be an unusual holiday, but the cancellation of large costume parties and street celebrations also makes Halloween 2020 eerily similar to one earlier celebration in particular: Halloween 1918, which fell during the deadliest pandemic of the 20th century.

In the 1918 flu pandemic, as during this current pandemic, the virus hit different cities at different times. By Halloween, deaths in East Coast cities were on the decline, after a second wave that had been even deadlier and more contagious than the first wave the prior spring. Further west, the flu was raging.

Just as the state of the pandemic varied, so too did the precautions that cities took for Halloween. Newspaper articles in the digital archive of the Influenza Encyclopedia, produced by the Center for the History of Medicine at the University of Michigan, provide a glimpse at the range of Halloween safety protocols in major cities nationwide.

One thing they make clear: it’s already hard enough to enforce safety protocols on a day like Halloween, but that challenge gets even more intense during a pandemic.

To avoid another surge, some cities urged residents to stay home, banned Halloween parties and street “jollifications,” and urged youngsters to celebrate quietly. In Rochester, N.Y. the Safety Commissioner told police to keep the noise levels down, out of consideration for the high number of people sick with flu or pneumonia who need “rest and quiet” to get better.

In Maryland, concerned that warm weather would bring people out and too close together, the Baltimore Health Commissioner banned “frolics” such as street celebrations, arguing that “while the epidemic’s sweep was becoming milder, it was still dangerous to permit large assemblages of persons.” Residents were encouraged to wear masks but not to attend masked balls, the Halloween edition of the Baltimore American quipped, and they were advised to avoid activities like blowing horns, which are “particularly dangerous” in terms of spreading germs. The city’s health commissioner also had to clarify that “dancing, which was listed as objectionable from the start, is still regarded as nonessential,” according to the paper.

In Pittsburgh, “ticklers and brushes are particularly forbidden, and confetti throwing will not be allowed because in contact with the hands clothes and the persons of the people throwing enhances the danger of spreading influenza,” reported the Oct. 30 Pittsburgh Gazette Times.

Indoor Halloween parties were banned as well. “Halloween parties are taboo, as are all other indoor gatherings, as the danger of spreading the influenza is still great,” declared Denver Mayor W.F.R. Mills, according to the Denver Post.

In some Midwestern cities, Halloween went on as normal. In Missouri, Kansas City banned Halloween parties of more than 30 people, but in St. Louis, police reported that “the usual number of street lights [had been] extinguished” and “bread boxes overturned” during the night’s festivities. The day after Halloween, an Ohio State Journal headline read “Big Throngs Defy The Health Rules: Thousands of Columbus People Jollify on Halloween Despite Flu Bans.”

In Indianapolis, the top health official lifted the ban on public gatherings just for Halloween, allowing residents to “go ahead and have all the Halloween parties they wanted to,” as long as they stayed away from the streets in the downtown area, according to an article in the Halloween edition of the Indianapolis Star. But being allowed to celebrate didn’t necessarily translate to doing so: an Indianapolis News article did predict fewer, and less rowdy, festivities than usual due to the seriousness of both the virus and World War I, which was still going on.

On the other hand, even where cities tried to target large gatherings, local newspaper coverage of scattered incidents of individual mischief-making suggests that the tricks part of trick-or-treating was especially pronounced.

In Dallas, “unusually rough and boisterous” celebrations lasted long after midnight. A piano was stolen and so was a horse; an 8-year-old jumped off a barn and miraculously managed only to sprain an ankle; a 2-year-old caught fire, and survived with only “slight” injuries.

In Birmingham, Ala., cabin fever was blamed for the city’s noisiest Halloween ever. “After almost a month of confinement and smarting under the bitterness of a closed city ordinance all of Birmingham ‘cracked under the strain Thursday night,'” according to the Nov. 1 Birmingham News. Revelers tipped over cars, stole porch swings, switched signs and uprooted gates in front of houses. The paper also speculated that excitement over World War I winding down may have also fueled celebrations: “Maybe the fact that Turkey had just surrendered, Austria was about to pull a collapse, and Germany was hanging groggily to the ropes, had something to do with the unusual display.”

It’s unclear what kind of effect these rowdy Halloweens had on case counts more than a century ago, especially given that it wasn’t the only event drawing people into crowds around that time: Election Day was just a week later, and people flocked to the streets again to celebrate the end of World War I just days after that.

Regardless of Halloween’s role, a long winter was ahead, and the flu did continue to spread at pandemic levels well into 1919, spiking in the following winter and in early 1920 as well. In the end, about 675,000 Americans and 50 million people died, and about 500 million people were infected globally.

Then, as now, even though they lacked much of today’s concrete knowledge about the nature of the virus, public health experts knew that social distancing and wearing masks slowed the spread of flu, and could do so on Halloween too. And so the same precautions they urged more than a century ago are getting new life, in hopes that Halloween won’t make this year even scarier than it already is. 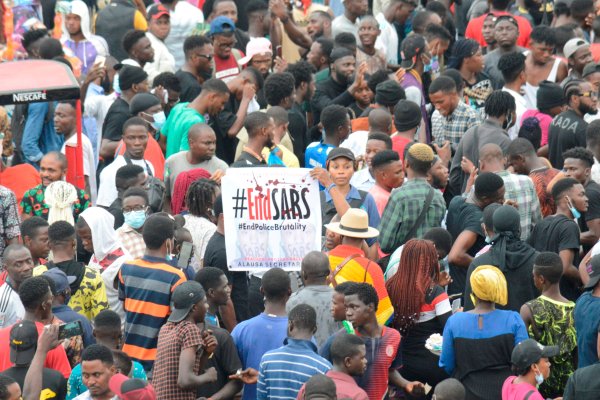 A History of Nigeria's Failed Police Reform
Next Up: Editor's Pick