'I Really Thought My Life Was Going to End.' Inside the Protests Taking on Police Brutality in Nigeria

Protesters stand with banners on a truck forced to barricade the Lagos-Ibadan expressway during a demonstration to protest against police brutality and scrapping of Special Anti-Robbery Squad (SARS) in Lagos, on October 15, 2020.
Pius Utomi Ekpei—AFP via Getty Images
Ideas
By Gimba Kakanda
Gimba Kakanda is a writer, social media influencer and political analyst based in Abuja, Nigeria.

I had never been brutalized by the Nigerian police before last Sunday. A new wave of demonstrations began in early October, with protesters speaking out against the brutality of the Special Anti-Robbery Squad (SARS), a unit of the Nigerian Police Force that often operates in plainclothes. I’ve been helping communicate about the #endSARS protests in real time. Last weekend I tweeted about the protest we were attending in Abuja, Nigeria’s capital, and shared our location. We were marching to the police headquarters in Abuja when police started spraying water cannons and throwing tear gas canisters at us to disperse the crowd.

Police officers ambushed my friend and I, grabbed my phone and smashed it on the floor. I was not aggressive, but it did not stop them from beating me up, from ganging up on me and hitting me. I was saying my last prayers. I really thought my life was going to end. It made me realize the danger of a system that has given savages the right to be unsupervised.

The officers transferred my friend and I to the police headquarters, and we met their superior. He told us we were lucky that the encounter was in the day rather than at night, because if it was at night, they would have killed us and erased every trace of our existence. According to Amnesty International, 10 people have died and hundreds have been injured in the protests so far.

An alarm was raised about our disappearance on social media, and one of the things that saved us that day was Dr Oby Ezekwesili, the organizer of the Bring Back Our Girls campaign, who came to the police headquarters and insisted on our release. There was also one dissenting police officer who argued against the treatment we received. If Dr Oby had not come to get us, and there had not been that lone voice of reason within the police force, our obituaries would be in the news now.

The problem is institutional. SARS, and the officers working within it, have the support of the police hierarchy. There is no penalty for any crime by the police and they are reluctant to punish one of their own. They don’t want to accept that there is rot in the system. Over the years, the police have been able to kill innocent citizens without any justice, and police brutality has become a culture here. An Amnesty International report earlier this year documented at least 82 cases of torture, ill-treatment and extra-judicial execution by SARS between January 2017 and May 2020. We have challenged this several times before in the streets, and nothing has happened. The political leadership has stopped listening to the masses. We had Occupy Nigeria in 2012, and there have been calls to disband SARS since 2017. What’s happening now is a long-awaited explosion of outrage.

On Oct. 11, the same day I was attacked, Nigeria’s government announced that SARS would be disbanded. This is the fourth time that the government has announced the disbanding of SARS. This time around, there is a replacement, but it’s nothing more than a change of name and acronym, to the Special Weapons and Tactics Team, or SWAT. It’s just like an old wine in a new bottle.

The current #endSARS protests stand out because there is no definite leader: every citizen is the head of this protest. The outrage now is not just about police brutality alone—it’s a result of years of people being undermined by the system. The government has not acknowledged that grievance. This pandemic has left Nigeria vulnerable, and even before it, 40% of Nigerians were living below the poverty line. During the lockdown, people were saying they’d rather be killed by COVID-19 than by hunger.

The people have been waiting for a channel to let out what they are feeling. Now is an opportunity for them to protest police brutality and also express disappointment in a system that has never cared about them. There have been years of bad governance, nepotism, and widespread corruption, and the government has refused to acknowledge these concerns.

The government needs to acknowledge the legitimate outrage, and not undermine it. They have to openly sentence the perpetrators and fully compensate all the victims. I hope there is reassurance that there won’t be business as usual. This is a generation that wants to do things differently, that wants to deviate from the path of their parents, that will no longer accept the old system of governance. The exchange of ideas across international borders has shown us new ways of fighting the system, and new ways of getting the political establishment to sit up. 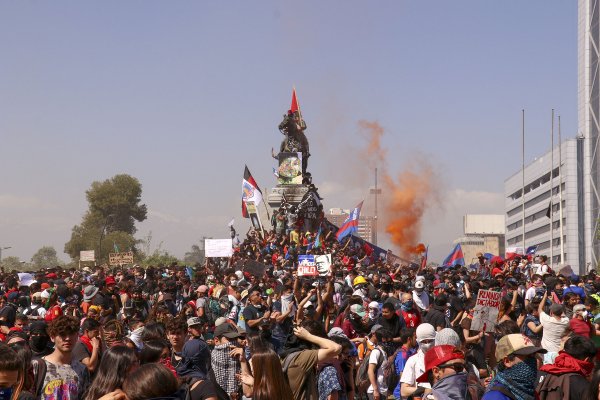 I Was Shot and Lost My Sight for Protesting Inequality in Chile. We Need to Keep Demanding Justice
Next Up: Editor's Pick