Sometimes to make art, you’ve got to build art, to layer ideas, colors, values and textures until you’ve shaped the thing that says what you want to say. David Byrne’s American Utopia, Spike Lee’s grand and glorious filmed record of the hit Broadway show of the same name coming to HBO Oct. 17, is art that has been built, a work of great joy and expressiveness, a tower of song with room for everybody. The music—some numbers drawn from Byrne’s 2018 album American Utopia, others from his body of work with Talking Heads, and one a cover (of Janelle Monáe’s 2015 protest anthem “Hell You Talmbout”)—feels fresh and familiar at once, inclusive but also mildly explosive. There’s an urgency to it, as if Byrne and his troupe of 11 musicians and dancers were staking their ground in a battle we shouldn’t even have to fight. The idea is that to survive—to live in any meaningful way—we must stay connected. It’s a principle so glaringly simple that it’s radical.

Byrne is an admittedly weird ambassador for the idea of connection: he isn’t what you’d call a naturally warm presence, at least not in Earth terms. Even at age 68, he’s still like an alien learning the rules of the planet. His awkwardness is his brand. But his desire to connect is robust, and it vitalizes everything that happens onstage during American Utopia. No one in this show has just one job. The musicians are also dancers and singers: their instruments are strapped to their bodies, untethered to any bulky sound equipment, which leaves them free to move and dance around the stage in a series of elegantly orchestrated numbers, with Byrne often at the center—though sometimes lurking at the edges, like living fringe—of the proceedings. (The choreography is by dance veteran Annie-B Parson.) All the performers, including Byrne, wear identical lunar-gray suits, and all are barefoot; the stage is bordered on three sides by a shimmery chain-link curtain. The grand scheme is elegantly simple, yet never chilly. This is a setting, a world, where certain essential problems have been worked out, creating the space and freedom to play.

And so even the songs every longtime Byrne or Talking Heads fan knows well—like “This Must Be the Place (Naïve Melody),” a moonlit cottage in ballad form, or the wriggly-waggly noodle dance “Slippery People”—take on new shapes and new life. Between numbers Byrne addresses the audience directly, spinning amusing tales about where these songs came from (he wrote “I Zimbra,” with its lyrics by German Dada poet Hugo Ball, to respond to a challenge thrown down by his friend and collaborator Brian Eno), or urging us to fulfill our civic responsibilities (he uses a lighting trick to show how badly the citizenry is represented when only 20 percent of the population votes). And as a prelude to the show’s shiver-inducing version of “Hell You Talmbout,” he explains that he asked Monáe’s permission before venturing to cover the song. Byrne’s band here is racially mixed, but he himself is very, very white; no wonder he approached with caution. But he and his band present the song—an invocation, written in 2015, for all of us to remember the names of murdered Black citizens, among them Eric Garner, Trayvon Martin and Emmett Till—with the synthesis of respect and bristling anger it demands. This number also represents one of the few times Lee cuts away from the show, to flash larger-than-life portraits of the victims, often held by a family member, on the screen. It’s an act of boldness that works.

Read More: ‘I Can’t Just Write a Bunch of Songs As If Everything in the Last Couple of Years Didn’t Happen.’ David Byrne on American Utopia and the Election

As for Byrne, he is, as ever, a wily and captivating showman. Though his hair is now snowcap-white, his dance moves haven’t changed over the years—he still favors angular, herky-jerky movements, like the folding and unfolding of a carpenter’s ruler, which are often mimicked, to grand effect, by the dancers around him. But as dazzling as he is, you can take your eyes off him: rather than receding, his fellow performers become dazzling planets in their own right. Sometimes they’ll face one another, playing to each other even as they play to us. Other times they march toward us, resolutely, in groups or pairs, as if to say, “Look at any of us individually, or all of us at once—you can’t go wrong!” Each performer’s style is as distinctive as a fingerprint: there’s the cool tomboy swagger of guitarist Angie Swan, the kid-next-door jubilance of bassist Bobby Wooten. As “Once in a Lifetime” rounds to its sublime peak, percussionist Jacquelene Acevedo bursts through the shimmery chain curtain with a clash of cymbals, a human celebratory announcement. Lee, working with one of this regular collaborators, cinematographer Ellen Kuras, doesn’t just show us the action; he too is part of its embrace. He’s our stand-in, our fellow observer-in-awe, though he has the advantage of wielding a camera.

At the close of the show, as the performers snake through the crowd during a rapturous version of “Road to Nowhere,” Lee turns his camera on the audience—American Utopia ran from October 2019 to February 2020, at Broadway’s Hudson Theatre and is set to return to Broadway next September—and we see it for what it is: this is a group of largely white, middle-aged people who came of age listening to Talking Heads. As a bunch, they’re far less diverse than the performers we’ve been watching onstage. You could argue that with American Utopia, Byrne is preaching to the choir, that this is all just an exercise in self-congratulatory white liberalism. But that would be missing the point. In one of his between-song riffs, Byrne muses that there are lots of interesting things to look at in the world: there are bicycles (which he famously likes very much—Lee even shows him riding away from the show on one) and beautiful sunsets, and even a bag of potato chips can be visually beguiling. But somehow we always come back to human faces: “Looking at people?” Byrne says. “That’s the best.” American Utopia is about facing the person in front of you, or next to you, or standing behind you, and doing the work of seeing. To truly see a person is a kind of song, and a world filled with those songs is the ideal. To get us started, Byrne and his troupe have hummed a few bars. The rest is up to us. 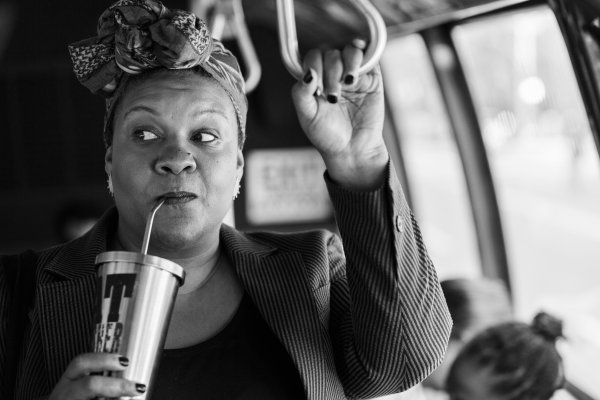 The Forty-Year-Old Version Is an Effervescent Look at an Artist Becoming True to Herself
Next Up: Editor's Pick