The Growing Danger of Political Violence Threatens to Destabilize America

A protester scuffles with a Trump supporter (R) in Kenosha, Wis. on Sept. 1 amid ongoing demonstrations after the shooting by police of Jacob Blake
Kerem Yucel—AFP/Getty Images
Ideas
By David French
French is a senior editor at The Dispatch and a columnist for Time. His new book is Divided We Fall: America's Secession Threat and How to Restore Our Nation. He is a former major in the United States Army Reserve.

Last week, America dodged a bullet. More precisely, it dodged a kidnapping. The FBI arrested 13 men who plotted to violently overthrow the government of Michigan, kidnap Governor Gretchen Whitmer, and “try” her for undisclosed crimes at a hidden location in Wisconsin. It’s hard to gauge the impact of such a plot on the American body politic had the kidnappers actually reached the point of attempting to seize an American governor. It would have been a convulsive event in an already-strained and fractured nation.

But as we pull back our focus from Michigan, the stories grow more grim. This weekend a hired security guard shot and killed a right-wing protester at point-blank range in Denver. In early September in Portland, Oregon, an Antifa-sympathizer allegedly shot and killed another right-wing protester and then was himself gunned down in a confrontation with federal authorities.

The list goes on. Authorities have charged a teenager named Kyle Rittenhouse with murder after he allegedly shot and killed two men (and severely wounded a third) during a night of protests and violence in Kenosha, Wisconsin. Federal officials have charged two members of the so-called “Boogaloo” movement with killing law two law enforcement officers in northern California. The Boogaloo movement is a far-right movement that hopes to ignite a second American civil war.

Moreover, this deadly violence is taking place against the backdrop of a steady drumbeat of urban unrest, including widespread acts of arson and vandalism. American polarization, fear, and rage have grown so great that a recent poll showed that Americans believe we’re two-thirds of the way to a civil war. Another poll, conducted in June, indicated that more than one-third of registered voters believed a civil war was “likely” within the next five years.

Are these Americans alarmist? Are we edging towards a true civil conflict – especially since we’re in the midst of an election where the president won’t commit to the peaceful transfer of power if he loses?

The short answer is that we should be concerned, not about imminent civil war, but rather about setting into motion the forces that could ultimately pull this nation apart – a national divorce of sorts – and the spiraling political violence is exactly the thing that history demonstrates can transform national polarization from a manageable political problem into a true crisis of rage and unity.

When I was researching my new book, Divided We Fall: America’s Secession Threat and How to Restore Our Nation, the reality that pushed me to write a book that would dare mention a word like “secession” was an eerie comparison to America’s two previous breakaway movements – the Revolutionary War and southern insurrection.

In both instances, a geographically contiguous and relatively culturally homogenous group of Americans believed their liberty and culture was under direct threat from a hostile power. These Americans lost faith in the normal processes of government to defend their way of life. Compounding the crisis, the level of hostility escalated to the point where they believed their political enemies represented a threat to their very lives.

Thus, breakaway movements emerged. The colonists sought liberty from Great Britain, and though it was imperfectly realized, few would question the underlying virtue of their movement. The southern insurrectionists sought to preserve slavery, and few now question their malign intent.

In fact, it’s hard to overemphasize the power of a few violent acts to ignite a furious mass reaction. John Brown’s raid on Harper’s Ferry – and subsequent northern abolitionist support for Brown during his trial and prior to his execution, ignited extraordinary southern anger. In his seminal one-volume history of the Civil War, Battle Cry of Freedom, the historian James McPherson describes what he calls an explosion of “unreasoning fury” in southern states and a “paroxysm of anger” that stoked the fires of division.

Indeed, if one looks at the formal declarations of secession, the fear that the North was intent on inciting a slave revolt is repeated time and again. Think of this as the “fake news” or viral conspiracy theory of the 19th century. For example, the state of Georgia’s lengthy official declaration of secession—in addition to its long defense of slavery—alleged that “for twenty years past the abolitionists and their allies in the Northern States have been engaged in constant efforts to subvert our institutions and to excite insurrection and servile war among us.”

Texas went even further, accusing abolitionists of seeking to poison innocent Texans, claiming they had “sent hired emissaries among us to burn our towns and distribute arms and poison to our slaves for the same purpose.”

To be clear, this fear was unreasonable. The North had no such genocidal intent against the South. But as we know from our own challenges with misinformation, facts and logic have difficulty penetrating the angry, partisan mind.

In fact, here and now in the United States, partisan Americans radically misjudge their political opponents and judge them to be far more extremist than they truly are. These misjudgments increase with the more partisan political media a person consumes.

So, how does history match the present? As I wrote in an earlier TIME essay, prior to 2020, it was abundantly clear that Americans were sorting into immense, geographically-concentrated sectors of supermajority partisan rule. In fact, by 2020 almost 80 percent of Americans live in a state with one-party rule at the state level, where one party holds the governor’s mansion and both houses of the state legislature. Red Americans are clustered together in the Southeast and much of Midwest. Blue Americans are clustered in the West Coast and Northeast.

Moreover, these partisan clusters increasingly view their opponents with hostility and suspicion, convinced that their political opponents represent a threat to their core cultural, political, and religious values.

So, given that we face increasing geographic separation and partisan hostility, why have we not already reached a tipping point? In part because we’ve lacked the spark of real fear has previously strained our national bonds. Yet violence can breed that fear. Domestic terrorism can tip a people over from the belief that their political opposites are actual enemies rather than mere opponents – and that’s especially true if opportunistic partisans hype each and every violent act from the other side and spread the message that “they” are coming for you.

Political violence is reprehensible. Every lost life is a tragedy. But now, as partisan hostility increases, and Americans eye each other warily over ever-widening divides, there’s another word we can attach to political violence – “destabilizing.”

Stopping the bleeding in the streets is indispensable to easing rising American fears of violent division. Every politically-motivated gunshot and protester death heightens the sense of fear and alarm.

The moral and political imperatives are clear. Political violence must be universally condemned. When Donald Trump told the Proud Boys to “stand back and stand by” during the first presidential debate, he gave unacceptable aid and comfort to a violent right-wing gang. Conservative politicians must call out and right-wing violence (as well as aggressive displays of weaponry) and progressive politicians must condemn violence from the left.

And while law enforcement must always be constrained by the Constitution, the disruption of the Michigan plot shows the vital role of aggressive, pro-active policing to preserve life. Moreover, lawless zones (like Seattle’s famous “Capitol Hill Occupied Protest”) breed violence and attract reckless vigilantes.

Both sides of our yawning political divide must understand the stakes. Too many politicians and pundits wield political violence as a rhetorical weapon, arguing endlessly over which side is more dangerous. Yet each new shooting and each new terror plot tears at our social fabric. It is time to bring peace to our streets. Until we do, our nation will find it increasingly hard to heal. 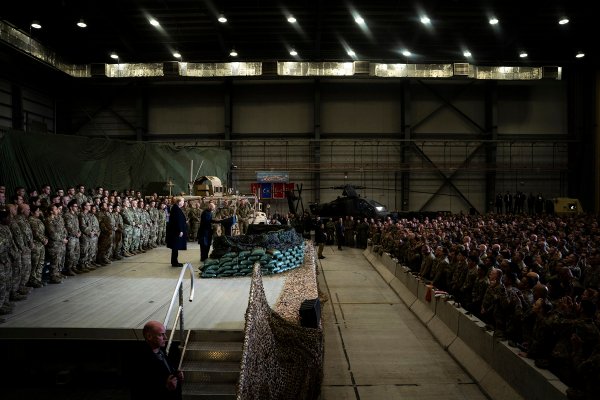 Here's Why Trump Has Lost Support with the Military
Next Up: Editor's Pick