As more cities and states move to observe Indigenous Peoples Day in lieu of or in addition to Columbus Day, Christopher Columbus statues across the country are under increased scrutiny this year. While some cities are taking extra precautions to protect their Columbus statues from potential vandalism, others are preparing to have them removed.

In Pittsburgh, the Columbus statue in Schenley Park has been wrapped in plastic ahead of its planned removal, leading the Italian Sons and Daughters of America to file a legal complaint to attempt to block the city from removing it. Pittsburgh Mayor Bill Peduto recently pledged his support to back the Pittsburgh Art Commission’s September vote to remove the statue from the park. The statue will be moved to a private location, per the mayor.

“After much thought and prayer I believe it is now time for us to return the Columbus statue to the Italian-American community that brought it into existence,” Peduto said in an Oct. 9 letter to the Art Commission. “They can preserve it in a manner than celebrates Italian-American culture, while acknowledging the wreckage that slavery and racism has done to America.”

A spokesperson for the Pittsburgh police told TIME Monday that officers are “not standing guard” at the statue, but are “conducting directed patrols, which means they are checking on (the statue) at regular intervals.”

Fourteen states, D.C. and more than 130 cities now observe Indigenous Peoples’ Day alongside or instead of Columbus Day, according to USA Today and other outlets. For many Americans, it’s more fitting to recognize the strength of the Native American community instead of honoring or overlooking Columbus’ legacy of violence.

For some communities, figuring out what to do with existing Columbus statues remains a source of controversy.

Police in New York City are guarding a Columbus statue in Columbus Circle, according to ABC7 New York. (A spokesperson for the NYPD said in a statement to TIME that it does not, as a practice, discuss specific personnel or staffing details. “We have officers assigned to provide security in the vicinity of Columbus Circle and will adjust as needed,” the spokesperson said.)

The extra security precautions come ahead of the unveiling of a statue of Mother Cabrini, described by New York governor Andrew Cuomo (himself an Italian American) as “the personification of the Italian American legacy” who “founded 67 schools, hospitals and orphanages.”

New York City Mayor Bill de Blasio, who also has Italian-American roots, created a commission to review “symbols of hate on city property” in 2017 in the wake of violence by white supremacists in Charlottesville. That commission eventually recommended the Columbus statue remain. Earlier this year, de Blasio reiterated his stance, saying “We should, I think, just stick to what was achieved by that commission,” per Spectrum News NY1.

Despite the increasing criticism Columbus faces across the nation, Cuomo has frequently affirmed the statue’s importance, saying earlier this year in response to a question about whether it’s “time for the Christopher Columbus statue to go” with, “I understand the feelings about Christopher Columbus and some of his acts, which nobody would support, but the statue has come to represent and signify appreciation for the Italian American contribution to New York; for that reason, I support it.”

He again stated his support in public remarks at the 2020 Columbus Citizens Foundation Celebration Gala last week. “Now, Italian Americans have two great statues in New York City—the Christopher Columbus statue and the Mother Cabrini statue, and they will serve to educate a new generation of New Yorkers and all the international tourists who come here on the proud and true legacy of Italian Americans, who we are, and what we have done to make this country that we love so much even better,” Cuomo said.

On Sunday, protesters in Portland toppled statues of former presidents Theodore Roosevelt and Abraham Lincoln as part of a protest against Columbus Day, according to the Associated Press. 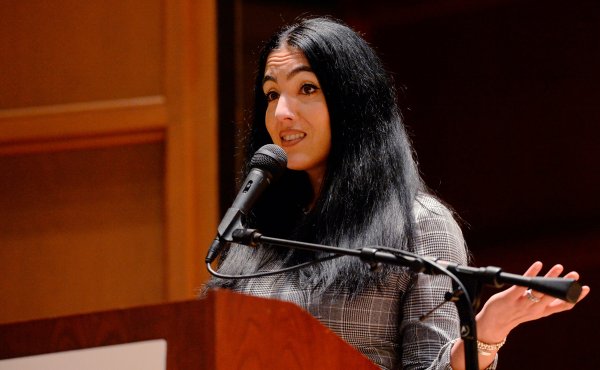 'This Behavior Is Taught' Pennsylvania's Second Lady Shares Video of White Woman Calling Her the N-word
Next Up: Editor's Pick