When people want to seem smart, they often profess a preference for films that are filled with ideas, as if mere stories about human beings living their lives could never be enough. Writer-director-producer Radha Blank’s effervescent debut The Forty-Year-Old Version—she also stars in the film—is first and foremost a story, a semiautobiographical riff about a Black playwright who’s about to turn 40 and hasn’t produced any viable work in years. But it’s also a stealth vehicle for a world of ideas. If you wrangled them all and put them in a one-sentence corral, it might be this: We are all many things.

The heroine of The Forty-Year-Old Version, named Radha and played by Blank, is beyond stuck. She’s about to turn 40, which means it’s been ages, seemingly, since she won a “30-under-30” award for a previous play. She teaches theater to high school kids, but there are problems there, too: in a moment of frustration, one of her students lashes out at her, basically calling her a has-been, and although Radha accepts this taunt with humor and grace, we can see how it stings. She’s having trouble making the rent on her Harlem apartment. She hasn’t gone on a date in forever. And she’s still grieving the loss of her mother, an artist, who has recently died. It’s a lot, and it’s too much. Even in the film’s early moments we can see that Radha, cheerfully acerbic and always ready with a quip, isn’t one to give in to self-pity, but she can’t seem to think her way out of this rut: “What do I have to do?” she asks herself. “Write a slave musical? An all-white play?”

Radha thinks becoming a rapper might get her unstuck, and she treks out to Brownsville to meet with a DJ who might be able to help her. D (Oswin Benjamin) is dreamily laid back and soft-spoken, and more than a little mysterious to Radha. After a false start, she finally steps behind the mic—when pressed for her rapper name, she blurts out the first thing that comes into her head, RadhaMUSPrime—and D likes what he hears, a sharp, funny take on the idea of having to produce “poverty porn” because that’s all audiences seem to expect, or want, from a Black artist. But before Radha can get anywhere with her new identity as a rapper, her agent and best friend, Archie (played, marvelously, by Peter Kim), gives her some good news about a play she’s been trying to get off the ground. An influential and comically, excessively white producer, Josh Whitman (Reed Birney), might be interested. At a reception, he greets Radha with a big, glo-biz smile: “Archie tells me you’re teeeeeeeeeaching!” But he has some notes on her play. “It rang a little…inauthentic,” he says. “I asked myself, Did a Black person really write this?”

What follows is the story of an artist who makes her way out of self-doubt via a perilously bumpy road. It’s also a love story, but above all, it’s a comedy, fleet and breezy and at times almost painfully observant. The Forty-Year-Old Version—which won the Directing Prize at Sundance earlier this year—evolved from a web series Blank started roughly six years ago, and it reflects her own experiences getting by in the world of New York theater. But it’s also steeped in the life of the city beyond the stage: shot in black-and-white that’s more satiny than grainy, it has a sheen of thoughtful elegance. (The cinematographer is Eric Branco.) Blank is alive to the best and weirdest of what New York has to offer: in a montage featuring people from the neighborhood who weigh in what it means to turn 40, one woman cheerfully observes, “When a woman turns 40, she is like fruit from the tree that falls to the ground for the bugs to eat.” Lamont (Jacob Ming-Trent), the homeless guy who lives on Radha’s street, makes regular and unwelcome pronouncements about her life; he’s particularly fond of jibing her for her dateless status. Mostly she just brushes him off, but in a generous, vulnerable moment, she brings him a sandwich. He chomps on it, complaining that she hasn’t used enough mayonnaise. And then, sensing that she might be looking for some of that stereotypical homeless-guy wisdom, he launches into a grand, cranky speech about how he refuses to be anyone’s magical Negro, least of all hers.

There’s lots of that angular, unsparing humor in The Forty-Year-Old Version. But if the movie is sharp, it’s never sour, and that’s thanks both to Blank’s writing and her very presence: her creation Radha is radically, raunchily truthful, but we can see her fragility too. Radha has gained some weight since her mother’s death, and her hair is always wrapped up in a knotted scarf. She has so much invested in hiding herself that she can’t see herself. D, her junior by not really all that many years, is attracted to her, but she rebuffs him. In one scene, he picks her up and the two drive to the Bronx to see an all-woman rap showdown. As their car coasts through the night, they talk and laugh—she begins letting him in, just a little bit—and the light from the street hits her high, glorious cheekbones just so. Her beauty is as radical, and as rare, as her quicksilver humor.

Only once does The Forty-Year-Old Version hit a note that feels off-key in the midst of its tart and honest, yet also generous, spirit. (What follows constitutes a minor spoiler, so if you’re sensitive to such things, you might want to skip to the next paragraph.) To get her play produced, Radha makes changes to please the moneyed white gatekeepers. When the white members of her audience respond positively at the premiere, she takes the stage, where she publicly excoriates herself for writing something she knows is hogwash. But in doing so, she also lets the audience know how wrong-headed they are for enjoying a work that she brought into the world under false pretenses—as if that were their fault. Watching this scene, I kept wondering if, after setting the audience straight about their response to her play, Radha found a way to give them their money back.

Yet Radha is more critical of herself than she is of anyone else. And the scene exists as an opportunity for her to express feelings that have taken a while to crystallize: well-meaning white liberals who congratulate themselves for understanding “Black life” have to know that Black life actually means many lives and many experiences. And artists need to be true to themselves, not to some idea of what any audience, of any racial makeup, wants to hear. The Forty-Year-Old Version reflects all of that, and more. It’s a love letter to the gorgeous, disorderly patchwork that is New York. It’s also a story about how we all need to reinvent ourselves as we age, and part of that is to be more forgiving of ourselves. When Radha steps out for her play’s premiere, looking elegant in a sleek, perfectly fitted tuxedo jacket and ethereal tulle skirt—plus major gold earrings—she’s dressed to play the part of a successful playwright. But as the evening takes shape, her outfit, more than a costume, becomes a kind of glam armor. She’s ready to play herself, however many selves that might encompass. 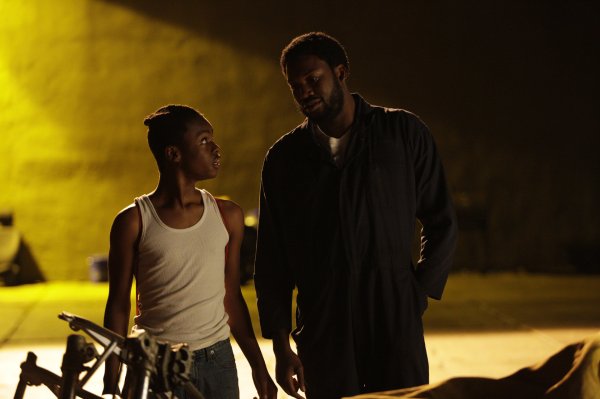 Charm City Kings Is a Bittersweet Tale of Growing Up on Dirt Bikes and Dreams
Next Up: Editor's Pick