People line up at the Inspired Vision & Compassion Center food bank in Dallas on Aug. 14
Nitashia Johnson—The New York Times/Redux
Ideas
By Zachary Karabell
Karabell is an author, investor, and commentator. His forthcoming book is Inside Money: Brown Brothers Harriman and the American Way of Power.

Normally, the last official jobs report before the presidential election would garner significant attention. But there is no normal these days, and the jobs report last week was immediately overshadowed by the president’s COVID-19 diagnosis. But for tens of millions of Americans, the state of their employment is, along with COVID-19, the only issue that really matters, and it’s clear that while more half the jobs lost in the immediate aftermath of the spring shut-downs have been regained, almost half – 10 million jobs – have not.

That fact alone would suggest the need for further government stimulus, but hope for that faded after the president announced that he was uninterested in further stimulus bill until after the election, though he then backtracked and suggested he was open to some action.

Even so, you might think that authorizing another round of perhaps $2 trillion in stimulus would be in the interest of a White House seeking to curry support ahead of the election, but there are reasons for their ambivalence: the harms of this COVID-19 recession are starkly uneven, and are disproportionately hurting those who favor the Democrats, especially poor and minorities workers clumped in urban areas as well as service industry workers all over the country. Some of those are in regions where the Republican Party is strong, but a considerable portion are in blue areas of the country more likely to support Democrats.

In short, this recession is the most unevenly experienced economic downturn ever. It is uneven by income level by race, by region, but what is becoming increasingly clear is that it is uneven by party affiliation as well. The economic harms of the pandemic and of attempts nationally and globally to contain it are hurting everyone, but those most inclined to vote Democrat are being hurt more than those inclined to vote Republican.

White women, for instance, have according to the Bureau of Labor Statistics recovered more than 60% of the jobs lost in April; black women, however, have recovered only 34%. The highest earning income quartile is now above the employment levels of the beginning of the year; the lowest quartile are still 25% below. The national unemployment rate is 7.9%; the unemployment rate for those 20-24 is 12.5%. For those over 55, it is 6.7%.

Then juxtapose those facts to who votes Republican versus who votes Democrat: according to the Pew Center, almost 90% of black women vote Democrat. 56% of Republicans voters are over the age of 55. Millennials skew 55% Democrat. In almost every category, those who are being hurt most by the recession are more likely to vote for Democratic.

There are exceptions: non-college educated white men are not exactly thriving in the COVID economy and according to most polls, those trend toward the Republicans, though the gap has been narrowing since 2016. In general, however, the recession has hit cities hard, and service-sector cities such as New York, Washington D.C., San Francisco, Los Angeles, and Miami especially hard. More suburban and rural areas of the country have seen less dire employment losses, and less economic contraction, in part because governments in many Republican-dominate states have been less likely to institute strict restrictions of businesses and schools. The net effect on whether the federal government will spend more to address stalled recovery with still substantial unemployment is that the geographic and demographic parts of the country that need help the most skew Democrat and the parts that need it less skew Republican.

In a functional political environment, there would be widespread recognition that the national economy and hence long-term prosperity for all of us is impossible if wide swaths of the country are economically sinking. Greater New York City alone contributed about $1.6 trillion to the GDP of the United States in 2019, which was nearly 8% of the national total. California is about 15% of the national economy. Similar outsized proportions are true of major metropolitan areas throughout the country. A nation with more than half of its citizens sinking economically is not a recipe for stability and strength for the whole country.

Yet our national politics seem indifferent to that reality. Political leaders appear more interested in the short-term needs of their particular base than the overall health of the country. Republicans are most egregious here, though one could critique Congressional Democrats that the political calculus of holding out for a bigger stimulus rather than compromising on a smaller deal is also playing politics with the economic needs of millions.

The failure to pass more stimulus aid, however, is the equivalent of refusing to authorize disaster relief in the face of a Category 5 hurricane that cuts through six states on the grounds that it left the rest unscathed. We don’t do that (usually) because we recognize that today it may be Texas that needs money in an emergency and tomorrow it might be New York, and that we for all our manifold differences live in one polity. But the current overlap between political affiliations and economic necessity has blinded many to that simple fact.

The refusal of Republicans to authorize more relief spending may make sense given that their base is less impacted by the negative effects, but it will not make or keep America great if wide swaths of the United States are economically imperiled. The politics may explain what is happening; they do not justify it. And in the end, we will all be the poorer if we do not act collectively—and quickly. 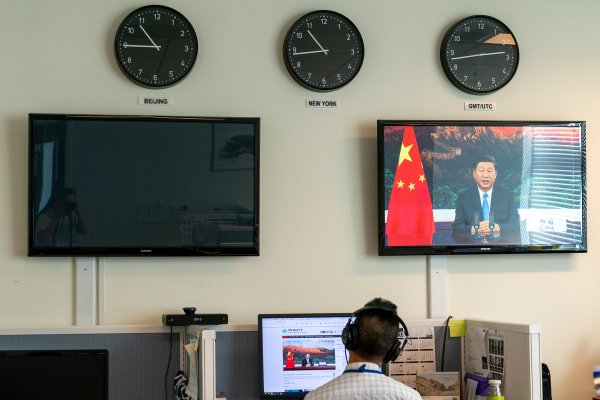 Despite a Strong COVID-19 Rebound, China Isn't Going Back to Normal Anytime Soon
Next Up: Editor's Pick