One of the gifts movies can give us is entrée into a world where we’d otherwise be outsiders. Charm City Kings, directed by Angel Manuel Soto, is set in West Baltimore, specifically among city dirt-bike riders, teenagers and young men (mostly) who are crazy about the speed and agility of these scrappy little bikes. For them, dirt bikes are a mode of transportation, zipping, sometimes recklessly, through the streets. But the more accomplished among their fans have elevated trick riding to an art form, popping airborne wheelies and executing dazzling, skidding spins. Like the worlds of skateboarding or surfing, this is a subculture built on derring-do—though it’s also impossible to deny the way a rush of air can simply feel like freedom.

In Charm City Kings, no one is more entranced by the world of dirt bikes than 14-year-old Mouse (played by an expressive and charming young actor named Jahi Di’Allo Winston), whose older brother, Stro, had loved them too. Mouse idolizes Stro, who was killed a few years back, a casualty of the unsparing world of street crime. But Mouse is still just a kid, with everything ahead of him. He likes riding around the neighborhood with his two best friends (Donielle Tremaine Hansley and Kezii Curtis)—Mouse has just acquired a small ATV that’s seen better days, while his friends tool around on old-school bicycles. Mouse loves animals and helps out, for meager pay, at the local animal hospital. And he’s fascinated by a new girl in the neighborhood, Nicki (Chandler DuPont). She may be the same age, but she seems a little older and way more sophisticated. For one thing, she takes pictures with a camera, not a cellphone, which mystifies the boys: how can you know how a picture will turn out, they wonder, when you can’t first see it on a screen?

Mouse also has a guardian angel of sorts in the form of a cop, Rivers (Will Catlett), who sees his promise and keeps tabs on him. But Mouse has begun to chafe under Rivers’ watchful eye: police are the enemy, in addition to just being terminally uncool. Mouse yearns to join a local dirt-bike gang called the Midnight Clique, and he’s especially entranced by their leader, Blax (Meek Mill), who’s just come off a prison sentence and is trying to reset his life by running his own mechanics shop. Mouse strikes up a seemingly spontaneous friendship with Blax, who puts him to work in the shop refurbishing a bike. The job at the animal hospital takes a backseat.

It’s not hard to see where Charm City Kings is headed. This is a movie about the mistakes kids are tempted to make when their options are limited, or even when they just think their options are limited. (The screenplay is by Sherman Payne, from a story by Barry Jenkins, Kirk Sullivan and Christopher M. Boyd, inspired by the 2012 documentary 12 O’Clock Boys.) But the movie works because its details are layered so deftly, and many of them are unexpected: Mouse helps a pregnant cat give birth in the family bathroom as his little sister (Milan Ray) and his mother (Teyonah Parris) look on; he welcomes a squirming, slimy mite into the world by taking it into his capable hands. Later, in Blax’s garage, he tends almost as lovingly—but also matter-of-factly—to the bike he’s building for himself, and we can see how he’s a boy torn in two directions. In a misguided effort to help his family pay the bills—fueled by a confused idea of what it means to be a man—he hatches a scheme so wrong-headed that you can hardly believe he’s the same kid who so tenderly delivered that kitten. Charm City Kings lands on an elegiac, bittersweet note rather than a happy one, and doesn’t feature as many crazy, exhilarating bike stunts as you might hope. But in its view of a world where kids make their own fun and also, sometimes, their own bad choices, it rings true. Sometimes becoming a man is the hardest stunt to pull off. 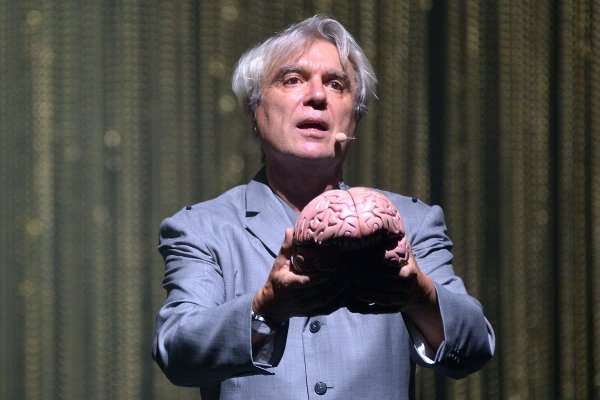 'I Can’t Just Write a Bunch of Songs, As If Everything in the Last Couple of Years Didn’t Happen.' David Byrne on American Utopia and the Election
Next Up: Editor's Pick